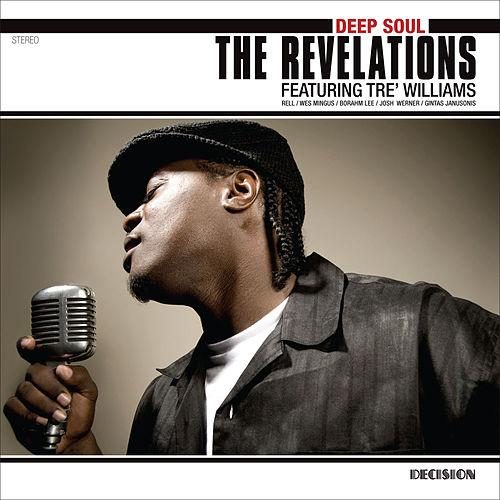 Before I get to the EP at hand, an instructive detour: I first heard D’Angelo’s “Untitled” when I was 12, and hated it. A raspy, naked man spinning – not standing, but spinning, I thought – almost every day on the TV. (I could have been listening to Nelly instead – a sacrifice, I bet.) It took time, but when I heard D’Angelo again a few years later, I felt wit, innovation, and saw how well, from an artistic point of view, that raspiness worked against the rough piano and guitar. In fact, D’Angelo is usually quite clear – his raspiness was almost feigned, indicating an artistic choice he decided to exploit momentarily, to great effect. “Untitled” became a favorite track – and that says a lot, as he has, despite the slim output, a handful of inarguably great songs.

I take an artistic perspective on rap (“unity,” wit, vision, and all that), and other genres are no different. The Revelations produce multi-genre soul. I’m not a fan of soul, but certain artists deserve my attention, many of which The Revelations’ own â€“ including talented vocalist Tre’ Williams – have all worked with, such as Lauryn Hill and Bilal. At close, I was reminded of a couple of things. Soul is not exactly lyrical. I can think of exceptions, but for the most part, it relies on vocals, musical composition, and sometimes style – oh well, different genres have diverging parameters, which does not bother me. Still, a tighter song on paper will always be a tighter song in the studio, or wherever else – lyrical excellence is rarely â€˜baggage.’ Also, soul can work with complex compositions, but too often, its barer qualities are lost. Indeed, lofty instrumentation, given the static subject matter, vocals, and so on, can often lead to bathos and a mix-up vision where a few smaller ideas could have worked better.

And here, there’s a big need to complement (note the “e”) Tre’ Williams’ voice and style. But, if you pull out every lush instrument and arrangement – what happens? The Revelations are extremely talented musicians. Compositions are not a problem. “Stay Free,” one of the stronger tracks, has multiple patterns and musical variations, with things that sound both older and contemporary. Here, it’s not overworked; the sum is infectious, but subdued. At the same time – and this is â€˜what happens,’ above – I can’t detect any real vision – as a whole, the EP has no thematic quality, nothing absolutely distinctive, just some quality sound and singing.

In many ways, this detracts from the songs’ individual qualities.

In “Sorry’s Not Enough,” here is a â€˜lush’ composition that really works. Tre’ Williams plays his voice up to the violin, which can be difficult since violins are â€˜competitive’ instruments – extraordinarily distinctive, they can take attention away from everything else. “Everybody Knows” opens with a guitar riff straight from Jimi Hendrix’s overlong “Voodoo Child,” and I kinda mean that literally. Regardless, the track reveals something obvious throughout the album. The Revelations can craft incredible choruses. Tre’ knows how to build up to it, too, changing his vocals’ rhythm towards a knowing climax. Still, a contrast: in Williams’ case, this works better if limited to just the chorus. The rest can feel a bit like clutter. Pretty clutter, but overwrought nonetheless.

Perhaps “Heavy Metal Blues” has the most ideas out of anything here. The title is misleadingly innocent – “blues,” sung against some heavy metal? But, it’s more here – “heavy metal” is the bullet, and Tre’ is singing about a murder he commits in a jealous rage. In terms of composition, Tre’, like before, builds towards chorus by changing his vocals, which, here, turn start-stop against some understated guitar riffs:

It’s emphatic, and, like in D’Angleo’s case above, an artistic choice. But, alas, the resemblance doesn’t stop there. In fact, “Heavy Metal Blues” has a much better precedent â€“ in setup, evocative title, and sharply surprising ending – in D’Angelo’s “Shit, Damn, Motherfucker.” But, why is D’Angelo’s track great? It’s full of atmospheric guitar chords, ironic vocals, and, in general, a sense of the ominous, handled with nuance and lots of humor. In brief, the entire thing fits, and is… tasteful, if that’s the word. In contrast, Tre’ sings:

â€” and, accompanied by a pained, crooning “O!,” it’s more comical than anything else. But, I doubt that was the intention, though.

“Deep Soul,” from its often excellent compositions, good singing, and revealingly problematic, idea-less title, works on some levels, but not on others. Its good points are purely technical. Its problems are overwhelmingly artistic. In brief, its loose ends keep it from being truly unified, and from being enjoyed beyond the visceral appeal.