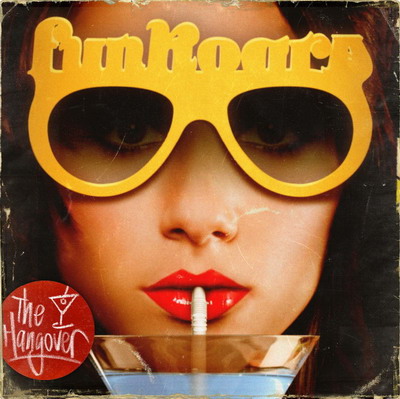 The Australian hip hoppers consisting of emcees Mr Trials, Sketchy Hons, Uncle Sesta, and turntablism from DJ Reflux, collectively known as Funkoars, make their way into the U.S. hip hop scene with their album “The Hangover.” Funkoars debuted back in 2002 with their album “Who’s Ya Step Daddy” and since then have released the 2006 “The Greatest Hits”, “not actually a greatest hits album, by the way,” as stated by the group. Touring nationally throughout Australia, Funkoars has grown immensely during the past few years and is ready to come back hard with their signature comical and cynical style in the latest album “The Hangover.”

“Ring, ring, ring.” It’s the sound of a telephone ringing as the story in “The Hangover” unfolds. As one of the Funkoars members answers the phone, he is awakened by an obnoxious American voice and reminded it is time to check out of the hotel. A female voice in the background asks, “Who was that?” as the Funkoars member turns to her and says. “Who are you?” With this in mind, Funkoars take their audience on a journey through many drunken nights leading to the subsequent letdown of a hangover.

As Funkoars begins their story in “The Hangover,” a short sample of lyrics from Wu-Tang’s “Brooklyn Zoo” of “that’s why I give you more of the raw…” sets the tone for Funkoars own “More of the Raw.” Blaring trumpets summon the track as the Funkoars members try to “get you up to speed on the eternal hangover that is our miserable, fuckin’ lives.” Since their last album in 2006, it is apparent that Funkoars still likes to keep it raw as ever and aren’t afraid to vocalize it. The track ends with the same unpleasant voice of the porter who called in the beginning, but instead is now banging on the Funkoars’ hotel door at four in the morning, threatening to come in. This quickly leads into the next track of “The Hangover” which discusses exactly that. Funkoars manages to highlight all the positive aspects of a hangover or better yet, those leading up to it. With the track’s loud electric guitars, Funkoars describes in detail the joys of drinking and never being able to quit as they say, “finally fast forward to headaches, debt, stress, problems/whatever in the bottom of the bottle solves ’em.”

Obviously, Funkoars are fans of drinking and partying, as reflected by yet another track about the bottle in “Let You Go.” They discuss the love/hate relationship with drinking as they show how they try to stop, but can’t. “Let You Go” introduces a funk beat and features sampled female vocals singing alcohol-conscious lyrics of ” alcohol, no alcohol, gotta put you down” to keep with the theme. Better yet, Funkoars ties in their own interpretation of N.W.A’s “Boyz-N-the-Hood” as they say, “Cruising down the street in my shit Ford…”

Aside from the vulgarity and obscenities, Funkoars are definitely one big group of rather humorous emcees as seen from their lyrics. They manage to step it up a notch even further in “The Ballad of the Phallic Menace” as its central theme about being scared of the penis made me laugh quite a bit. Funkoars raw lyrics and comical lines are nonstop as they say:

“It’s got a mind of its own
It would forget me if I wasn’t attached to it…
This bastard gets lazy
This ain’t how I brought him up
This ain’t how I raised him
This piece leaves you a bit shook
Fascinated by the hairy anomaly Bigfoot
Look, relax, chill
Just wait until I get the camera ready
He gains ten pounds on film”

Adding to the existing themes of partying, alcohol, and penises, an album such as this would not be complete without the few tracks about women. Funkoars samples the New Zealand blue rock band Human Instinct for the track “Black Sally” as its heavy electric guitars and rock influence makes for a great track. It’s one thing for a group to sample a well known song, but when a group can sample a less known track and make it their own, the group has some talent. Human Instinct’s original guitar riffs and extraordinary playing skills matched with hardcore lyrics from Funkoars shows off the immense talents of both groups involved.

“Never Coming Back” also discusses the women in their lives, but in this track, it comes with a twist. Funkoars finds themselves in a rather sticky situation as they are confronted by the police about an encounter from the previous night at the hotel with a stripper. With their amusing lyrics, Funkoars unveils the story to their audience, but maintain their innocence with the police as they say they will never divulge the truth after seeing many episodes of Law & Order.

Surprisingly enough, Funkoars interests span far beyond the alcohol and partying as their involvement in hip hop appears to be just as important. On a few tracks, Funkoars manages to impress us with their lyrics about their passion for hip hop. In the standout track “This Is How,” Masta Ace makes a guest appearance and with Funkoars shows “this is how hip hop is supposed to sound.” The funk inspired track full of strings, lays out the reality of being an emcee and how it takes some time and effort in order to see some money roll in as Masta Ace rhymes, “It’s all about the flow, don’t let a rapper get up on a song and say it’s all about the dough.” Nicely put.

Funkoars fans are used to the raw and obscene lyricism from the group as “The Hangover” does not disappoint. Although the themes of alcoholism and partying were a bit excessive, all in all, Funkoars knows how to lay down a track as their humorous lyrics permeate throughout the album. It isn’t easy listening for just anyone as I can see some listeners getting offended, but at the end of the day, it’s all done in fun and entertainment. “The Hangover” made me laugh, had some quality funk/rock inspired beats, and had many memorable lines as the Aussies were able to impress. As seen from the past couple of years, Australian emcees are attempting to make their mark in the U.S. sector so the existing U.S. emcees better step it up.