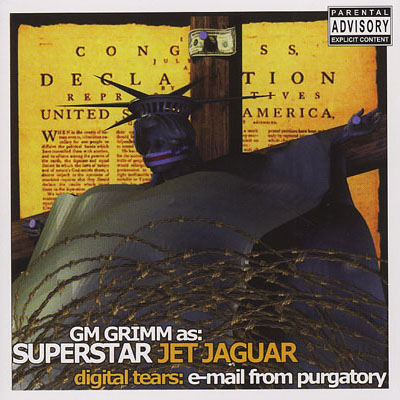 It’s unsurprising rappers always turn to ‘lower’ culture – comic books, cartoons, martial arts, wrestling, or whatever other pop trends they might enjoy – as hip-hop is immediate, a matter of direct resources. In brief, it is, in its own way, accessible, and pop, in all its forms, is sometimes a big part of rappers’ style, or even subject matter. MF/GM Grimm is just one of many rappers to prove this, even releasing a comic book based on his life. In “Digital Tears,” he did something similar, perhaps with slightly bitter symbolism: Jet Jaguar was the product of a design contest, and was supposed to be the ‘superstar’ of some old Godzilla film, before its producers decided he was less marketable alone. In brief, he became a mere protÃ©gÃ© – any similarities, then, to Grimm’s life, and his strained relationship with MF Doom?

Perhaps, but the context, although interesting, can’t really enhance “Digital Tears” one way or the other. In the end, it matters if the product is good or bad, and thither I turn my disappointed ear. ‘Disappointed,’ as I’ve heard much about the album, although (subconsciously or not) most critics did not really quote from Grimm’s lyrics, nor describe, beyond vague instrumentation, whether songs, as lyrical craft, or musical compositions, worked beyond mere pleasantness. So, that will be the focus.

Sure, Grimm is a good, sometimes excellent, producer, as many tracks here (and elsewhere) show. It’s what he’s best at, and here, it’s what counts. Musically, the tracks are versatile, play with samples, vocals, and different styles, and sometimes ‘force’ disparate elements into a coherent whole – the result isn’t some dumb disaster, but creative and often memorable. But, as a rapper, or, as a persona, Grimm is far more likable than talented. I won’t let this go unexplained, so let’s count the problems. Flow-wise, he’s uncreative, stilted, and monotonous – his delivery is clear, but merely gets his voice across and nothing more. Of course, some of this might have to do with his injuries (he was shot 10 times and paralyzed), as he does not rap like he did pre-1994, but his flow is not always dull; it seems to be a choice. But, even if it weren’t, one can’t â€“ even if it sounds cruel â€“ make excuses in art. Lyrically, Grimm is mediocre, and sometimes worse. Consider both below:

“I paid for the sins of my ancestors
also for the future sins of my predecessors
I went on a quiet quest to quiet down my aggressors
from multiple correctional facilities, understand utilities
turning liabilities to commodities
so many tragic errors, this drama’s a comedy
devil continuously consume my construction
contaminating the content through contagiousness”

Alright, not a single memorable line. In fact, a lot is pretty banal, whether it’s “paying for sins,” or “turning liabilities to commodities” – it’s effortless, really, stuff that gets penned thoughtlessly, with plenty of clichÃ©s. It gets worse, as the forced, clunky, and downright lazy ‘c’ alliteration in the last two lines turn something innocuous into an atrocious little verse. It’s from “All Y’All,” which is otherwise good. Production-wise, it’s driven by large, epic violins, but also has a brief, jazzy saxophone and drums more suitable to arena rock. But, the combination works quite well. Too much of any element (violins – too sappy; sax – too ill-fitting, unsubtle; drums – too ‘open,’ and pretentious) would have been a disaster, but Grimm has the skill and self-control to avoid that. And, there it is – a solid effort, but only half of Grimm’s sum contribution, a trend Grimm never really escapes.

“Stable” is slightly better lyrically, and, performance-wise, there’s something to it. It takes a concept – loosely, ‘mental stability’ – and structures it along the lines of experience, the refrain ‘You don’t understand…” – refreshing, since most gangster rap (and this track is mostly gangster rap) tends to brag, and little more. No loose ends, but still – many clichÃ©s, and no real insights. “Go Back” is very well produced, with a single coarse string grating against a very simple drum arrangement. It’s an example of Grimm’s versatility – here, minimalism, which doesn’t degenerate to dullness – against the more elaborate (and still successful) examples, above. “Dancin'” features very good, aggressive, and rhythmical flow by Grimm, which should make you wonder – why doesn’t he assume 95% of his other work requires the same kind of performance? It does, and it’s obvious Grimm can do it, if he really wants to.

“Black Helicopter” is one of the worst things of Grimm’s career. A banal conspiracy fest, it starts with the sound of – surprise, surprise – a helicopter, inaugurated by a dull organ whose repetitive keys alternate almost comically back and forth, as if this were a humorous track. It’s not, it’s just a half-sung bit of nothing, with lines obviously stretched to make them fit some cookie-cutter rhythm:

“Overseers are rude
we’re guinea pigs, drugs in our food
this government is crazy
they’re killing off our babies
it should not be like this”

The title track, featuring similar-minded simplicity, is equally dull. A subdued keyboard that never goes anywhere, with dull drums that do nothing but speed Grimm’s flow along. “Ying & Yang” is a love song, with some fairly epic (but subdued) horns – a weird stipulation, especially given the content. But, the result is very good, although Grimm’s lyrics are, as before, not very insightful. The hook is sung by Su-Ann Ortiz, who offers nothing remarkable, just the ordinary banality of pop-love. “Taken” is a pretty well-produced track, featuring drum screeches spaced far enough to drive the track, as well as small guitar riffs and multiple parts and variations. It has enough variety to even bring out Grimm’s more creative flows, which run against the stop-start quality of the beat.

“Happy” is appropriately trippy, with an interesting concept for the chorus: while trying to splice some Ice Cube into the track, a warped, babyish “happy” comes on, followed by a message from the government. It’s obvious, but funny, although I’m not sure if it was meant to be so light. Probably not. “Superstar J.J.” has Grimm crucified, perhaps the only time the Jet Jaguar persona is genuinely invoked – a problem, since it makes the persona superfluous, a bit of fluff used to prop an above average album up a bit. The concept, then, is non-existent – just one of many loose ends. Musically, there’s a pretentious organ and hook – Grimm becomes larger than life, but gratuitously. Lyrically, it doesn’t hold up well, either, although Grimm has a nicer flow than usual.

In all, the thing is a bit less than solid. A bit, but enough to keep Grimm unrecommended, a well-loved rapper whose large following just confuses me in its praise. I don’t think “Digital Tears” is very good, but I do think Grimm can do better.