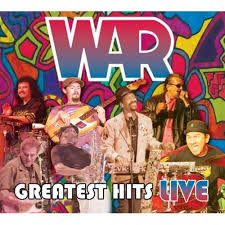 I’ve always been ambivalent about live albums, the double-live especially. I’m not a big fan of extended vamping (unless it’s done creatively â€“ see Aceyalone’s “Makebalillia Live” off “Grand Imperial”), and I usually find myself wanting the live performances to sound more like the studio versions. Of course, that makes a live recording all but pointless, since if you wanted to hear a perfect studio rendition you’d just listen to the album, right? My husband, however, along with plenty of others, is a fan of the jam band and will download multiple concerts from a single tour from his favorite groups because, as he repeatedly tells me, the songs are performed differently every night. And as for double-lives, you can’t capture the scope of a full concert in any other format, so they are completely justified.

I’ve grown to understand this perspective more, but the jury is still out for me. Part of the problem is that hip hop doesn’t really do the live album thing much, and when it does, it’s rarely a spectacular affair. For some reason, twelve hypemen drowning out the main performer just doesn’t translate very well to wax. There are exceptions, of course, with The Roots being the most obvious, but even my beloved Tupac was barely able to redeem his own (posthumous) live album. The few times live albums work for me, it is usually because a) the artist/group has plenty of material to work with, and b) he/she/they present the music in a new, interesting fashion without going overboard on either the chatter or the improvisation.

For a group with the stature and history of War, you don’t have to worry about a dearth of available songs â€“ they could have put together a three-disc set and still had good stuff to spare â€“ so the only question that remains is whether or not they can translate their undeniable spark to the live format. As it turns out, the answer to that question is a qualified yes, thanks mostly to the caliber of the band. With musicians on everything from guitar, drums, and bass to saxophone, harp, and percussion, they create a full sound on stage, and the high recording quality preserves the excitement they create with the audience. Classics like “The Cisco Kid” and “Why Can’t We Be Friends” are lovingly rendered with enough flourishes to make them stand out from the versions you’re familiar with, while “Galaxy” and “Slippin’ Into Darkness” get a more extended treatment, allowing the band to flex its muscles.

The only real knock on the album is that lead singer Lonnie Jordan goes a little too heavy on the audience chit-chat at times, reveling in past glories that include the band’s heyday and countless acid-tinged escapades. As a revered musical figure with plenty to reminisce about, it’s forgivable to an extent, but when it ruins songs like “Spill the Wine” by devolving into trippy, improvisatory nonsense, it becomes a real drag on the music. Many of the songs run long due to Jordan’s excessive talking rather than the musical mind-melding the band is famous for. When you have a group that capably blends the styles of Santana and James Brown, you want to hear them playing their damn instruments rather than marking time in the background.

The most ridiculous of the audience banter is over by the end of the first disc, thankfully, and the band finally begins to hit its stride. On “Lowrider (Medley),” which runs for a full half hour, all the instrumentalists get illy with some sweet solos that segue into other well-known songs. Francisco Tomaselli’s stunning bass solo becomes Cream’s “Sunshine of Your Love” with the rest of the band, followed by Sal Rodriguez’s drum solo and the band’s Black Sabbath “Iron Man” rendition. When they finally bring it back to “Lowrider,” the crowd explodes with anticipation fulfilled and the band triumphantly closes on this note.

There isn’t much that can go wrong when a band with a hefty legacy of hits puts together a collection like this. War’s biggest songs also happen to be some of the biggest and best of the last century, so you’re sure to recognize plenty and enjoy the rest. While the talking slows the groove a bit, there are plenty of lovely moments along the way to make it a worthwhile purchase. Whether it’s the band referencing its biggest influences in the epic closer or the guitarist getting loose enough to slip the “MalagueÃ±a” into the performance of “Gypsy Man,” it is a musical tour de force that delivers on most of its promises, which is saying a lot for a group of this caliber.