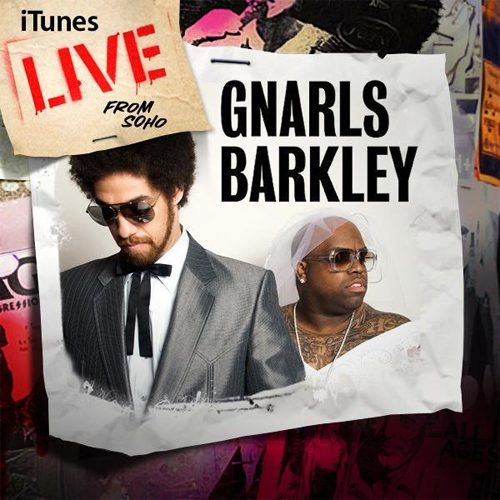 That statement is not nearly as absurd as it seems. For years artists of all genres have been revisiting their own catalogues, deciding to replay them in a new way. MTV’s “Unplugged” series made it trendy to remake your music in an almost completely acoustic way, and recordings of those live performances subsequently made it even MORE trendy by becoming best sellers. Mind you this is not the same as live concert albums, a format that’s been around so long even Peter Frampton forgets where it all got started. Instead this is a chance for the singers and performers to take their own material and think about it in a whole new way – I’ll sing this verse THIS WAY instead of THAT WAY or I’ll play the instruments at THIS TEMPO instead of THAT TEMPO. The changes can be a revelation to both performer and artist alike, revealing hidden facets of songs that were never before considered, sometimes changing the emphasis and style altogether.

Cee-Lo and Danger Mouse follow this plan on the “iTunes Live From Soho EP,” taking songs from the acclaimed 2008 album “The Odd Couple” and giving them new life during a performance at the Apple Store in Southampton. Cee-Lo opens the album by telling the assembled crowd “I don’t want you to just stand, I want you to get loose and have a good time.” That’s not a hard request to obey as DM and Cee-Lo launch into a new take on “Run (I’m a Natural Disaster)” that actually comes as close to the original as any of their performances here. The key changes to the sound are a more electronic and minimalist version of the melody, while the song is if anything made MORE frantic by the use of rock guitars enhancing the live show. The pace of the song is largely the same, so the only other major change is that there are no children screaming along with the chorus in this Soho version.

It’s on “Who’s Gonna Save My Soul” that Gnarls Barkley really go out on a limb revisiting their catalogue. While the original version had a dark mysterious vibe that was James Bond meets Portishead with a plucky strummed guitar and Cee-Lo’s mournful wail on the chorus, their new take on the song slows the pace of the original WAY the hell down, while the instrumental goes from hinting at a brooding melancholy to the deepest of deep funks. The gentle understated guitar imitates rather than recreates the sound of the original, but gives one the feeling they’ve stumbled into a secret rehearsal in a smoky nightclub as Gnarls Barkley were preparing to go on a worldwide tour. They’re working out how the song sounds best live right before your eyes, and even though it varies widely from the original one thing hasn’t change – Cee-Lo is still pouring his heart out over the beats as he’s “tired enough to lay my own soul down.” If anything the ache of his breaking heart is even more heartfelt, as he insists they “dim the lights just a little bit” in the opening and seems to be relentlessly searching for daylight for the next 210 seconds.

On “Surprise” Cee-Lo describes what they’re doing here as “cool stripped down jazzy versions” and that’s certainly an apt way of categorizing their take on this song. Gone is the 1960’s pop sound of the original, keeping the empassioned vocals of Cee-Lo in tact, taking out the harmonized “bah ba-ba-bahhhhh” chorus completely. “Crazy” goes even further away from its starting point, as the track is slowed to the point you’d almost think Danger Mouse was sipping on syrup. Cee-Lo obliges by changing his delivery, drawing out his vocals, adding in “mmm-hmms” for the audience as needed, and then singing a chorus bereft of his pleasantly ear-shattering “KAH-RAAAAAAAAAAAAZY” that made the first take such a big hit. It’s clear the Soho crowd knows the song no matter how he sings it though, as they all sing along perfectly when he gives them the chance to interject. “I think you’re all crazyyyyy, just like me” croons Cee-Lo on the revised song. Clearly they’re crazy for him.

The short jam-packed EP ends with an intense performance of “A Little Better,” which borrows stylistically from Korn in its reliance on a heavy nail-pounding beat that squeaks, bangs, clangs and rocks your socks off. The new takes Gnarls Barkley finds on their own material on “iTunes Live From Soho EP” makes one wish that Danger Mouse and Cee-Lo would actually record studio versions of these new arrangements, but it may be that the magic comes simply from the place and time they did them and spur of the moment decisions about how to perform their set. Nevertheless it’s worth saying that if you were a fan of “The Odd Couple” in 2008 you owe it to yourself to check out this EP and see these songs in a whole new light.