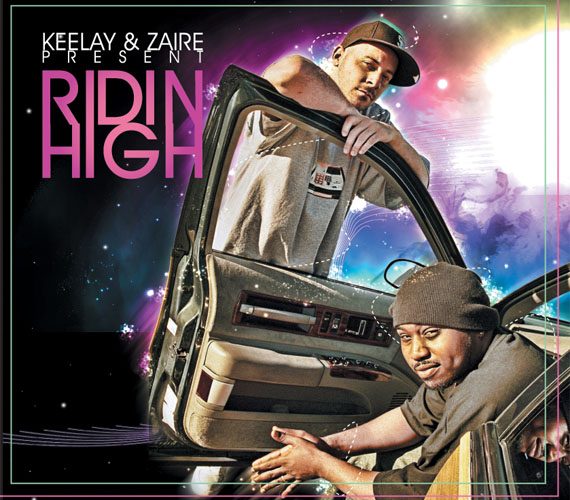 The title of bi-coastal producers Keelay & Zaire’s debut album, “Ridin High,” has several meanings. On one level, it refers to how the duo is feeling, like they are riding high and on the top of the world. They are riding high on hip hop, as the track “Addicts for Real” explains. They are also riding high in the literal sense, with a glove compartment full of weed and St. Ides. On another level, the title refers to the fact that they are taking the listener on a musical journey, a laid-back cruise through fifteen tracks. Finally, “Ridin High” refers to the 1977 classic by Faze-O which serves as a musical backbone for the album, and is covered on the title track.

Keelay and Zaire met a few years ago on a forum on www.ughh.com. They started trading beats back and forth, and decided that they had a musical chemistry that deserved exploring. Keelay, based in the Bay Area, brings a hard drum sound which Zaire, coming out of Virginia, smooths out with his R&B influence. The result is a little Cali G-Funk, a little J Dilla, and a little R&B. There are also nods to Primo and Pete Rock, both in the jazzy boom-bap they deliver, and the horn sample from “T.R.O.Y.” that shows up at the end of “We Made It.”

They turn over the mic to an army of guests, including well-known artists like Blu, Phonte and Planet Asia, as well as lesser known MCs and singers. This is essentially a compilation album, and the tracks vary in subject matter and sentiment. “Addicts For Real” is an upbeat, almost New Jack swing song about a life-long addiction to hip hop. Zaire explains:

“Cali 2 NY,” on the other hand, is a more sinister track, featuring pounding organs and gritty rhymes by Planet Asia and underrated Bay Area MC Rasco, along with Hassaan Mackey and Slo Mo. The MCs hold their own, but the organ riff gets repetitive. Keelay & Zaire mix it up on “I Used to Ride,” speeding up a country sample, and adding in tubas while Fortilive and Saafir boast about their badassness, delivering tales of “.38’s with tape on the handles.”

Zaire’s R&B background shines on “Wake Up,” which offers another perspective on the guns and bravado of “I Used to Ride.” Emilio Rojas’s rhymes hit particularly hard in the aftermath of Oscar Grant, an unarmed father who was gunned down by transit police on New Year’s Day:

“Wake up, your alarm clock radio’s on
But this morning they ain’t playing no songs
They just claiming it’s a shame that them babies are gone
Saying it’s a gang-related assault
What are they taking us for?
Bloodstains on the arm of the law
Shell cases all over the floor
From police-issued pistols they thought
Never would inflict no harm
But now the innocence is gone”

After this serious, heavy track, the listener almost gets whiplash when Keelay & Zaire go into the hedonistic jam “I’m On Swerv” with Tash of Tha Liks rapping over Cali funk and robot voices. It’s a good song, but it’s jarring to go from a song where people are boasting about gunplay, to lamenting the effects of gunplay, to dropping lines like “hoes know I’m so inconspicuous/I walk in Benz dealerships like, ‘Yeah, bitch, gimme this!'” Keelay & Zaire were obviously trying to present a variety of styles and a breadth of range, but it doesn’t all mesh together that seamlessly. The R&B bent of the music in particular causes the last third of the album to drag; the alto sax on “We Made It” is close to smooth jazz, and as hard as Phonte and Dminor try on “Alright With Me,” I just wasn’t feeling it.

These problems are forgivable, particularly when Keelay & Zaire offer up tracks like “Trapped,” with its snapping snares and whining synths that are like Dre meets Black Milk. Blu has the honor of best song; his lines on “The Times” are a devastating look at hard times where “momma’s knees sore from praying so hard.” He’s complimented perfectly by the introspective piano and hard-hitting beat. Despite it’s unevenness, “Ridin High” is a nice portfolio from an up-and-coming duo. “Ridin High” should prove to be a prescient title; with their combination of smooth yet banging beats, Keelay & Zaire are set to be the underground production team to look out for.