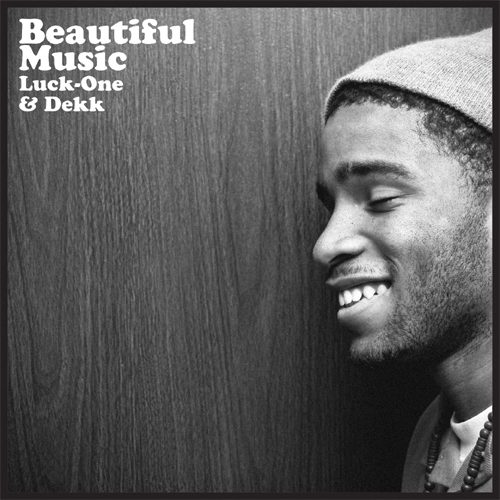 In another time, Luck-One & Dekk would have sounded decidedly different than they do on their “Beautiful Music” EP, and you’d have been tempted to throw tags like ‘conscious’ and ‘backpacker’ at them. But because it is 2009, they are expected to not evoke those terms anymore. That’s not to slight conscious rap and backpack hip-hop, it’s to illustrate that artists like Luck-One & Dekk operate in the here and now. Seemingly contrary to that, the EP opens with “80’s Back,” an electro-tinged track whose hook revels in throwback imagery. That is certainly nothing new, in fact to bring the ’80s back has been on rappers’ agendas since Wu-Tang entered in ’93. But like the Clan, Luck-One & Dekk bring their very own attitude, definition of sound, and skill level to the table.

Additionally, 24-year-old rapper Luck-One brings with him the experience of having spent more than half a decade in the system, and he’s determined to put the lessons he’s learned (which included teaching himself a second language and studying marketing) to good use. If that sounds too much like social rehabilitation, rest assured that we have a remarkably talented wordsmith making his debut here. Luck-One’s natural flow is framed by a charismatic enunciation and clear voice, and guided by rock-solid breath control and intricately progressing rhyming. Producer Dekk provides the rapper with beats that are heavy on bass while relying on lighter – but nonetheless potent – measures of synths and drums. At times the production recalls traditional Bay Area indie sound (with the slightest tangency to hyphy), other times it successfully ventures into the field of R&B without losing its ties to hip-hop. In a rare moment of journalist/publicist agreement, RapReviews concurs with the promo for “Beautiful Music”: ‘Throughout, Luck’s gripping rhyme schemes are flawlessly interwoven with Dekk’s irrefutably next-level soundscapes, drenched in his signature synth-heavy sound, and backed by the sparse drum patterns that add to the tracks without taking away from the urgent messages that frame them.’

“Beautiful Music” contains 7 songs, and with one exception the clear purpose Luck beheld when writing them is felt. Sustained by a variety of synths and slapping drums, “80’s Back” trumps the expectations of simple nostalgia as the song revolves around the MC’s first steps in hip-hop and what it came to mean to him: “Many ways [they] tried to vilify rap, but we still alive / For me what it symbolize – jail cells we sit inside / with souls stressed in masses the passions and spirits die / This is civilization authored by the uncivilized / where righteous-minded individuals get penalized.”

Luck-One may be more wordy and verbose than your average, but he has enough sense to realize that it’s still all music. “Coolax” finds him “gainin’ my balance off lines from Charlie Parker,” while he leans comfortably back into the meditative backdrop. Still he infallibly returns to his social agenda:

“Just imagine if instead of the gangs in the ghetto formin’ a chasm
where we fall off in a spasm of false masculinity
we knew the path of travelin’ light (…)
thinkin’ beyond our physical, graspin’ our mass divinity
and chose the opposite to stackin’ at gun point
attemptin’ our ascension from these shackles at some point”

The most radio-friendly offering is “Could’ve Been Me,” made up of biographical sketches where Luck-One puts himself in the position of others, and competently given a neo-soul shine by singer Randa Smith and Dekk’s gracefully thumping beat. “Prince Wit’ a Thousand” breaks out (discreetly) shrieking guitars to support the rapper in determined mode. “Back at Long Last” and “Road to Destiny” both feature guest rapper Immaculate (of Luck’s crew Seventh Science), who acts as a reliable tag team partner on the latter. Dekk meanwhile keeps the music fresh with soaring, well-placed and -timed synths before he returns to the mellow zone with the closing “When I Forget,” a lofty composition consisting of soft uptempo drums and bright layers of sound with singer Nafisaria on background vocals.

This is just the beginning for the Portland-based duo. For Luck-One it is also a new beginning after his unfortunate transition from his teenage years to adulthood behind bars. Grounded in the same firm, fertile artistic soil as Blu, Kero One, various Justus League alumni, or Portland’s own Lightheaded crew, Luck is not yet untouchable and maybe he will never be in rap terms given his soft-spoken ways and long-winded writing. But if the “Beautiful Music” EP is anything to go by, there’s more good music to come from Luck-One and Dekk, collectively or individually. Certainly when they heed the hook to their own road map “Road to Destiny”:

“I’m on, gettin’ my mind right, standin’ on my own two
Understandin’ the present, not waitin’ on your hindsight
You could get famous and stricken blind by the limelight
Make your goals, know your role, walk it when the time’s right”