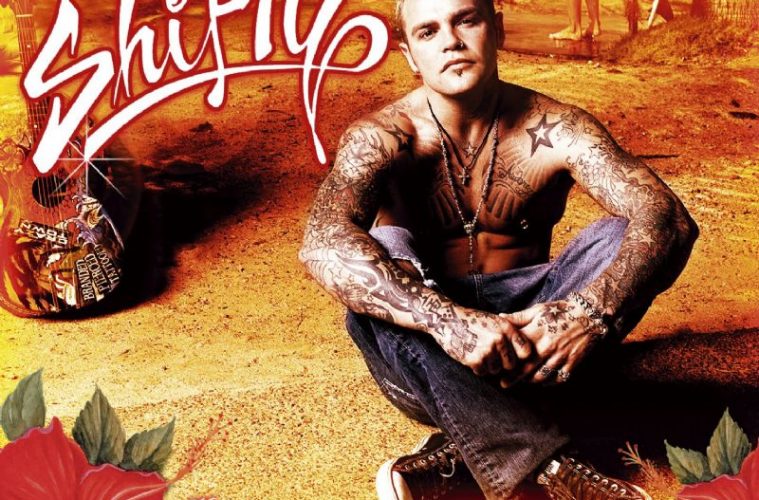 An attentive reader recently observed that ‘the opening paragraph of reviews on RapReviews often doesn’t pertain directly to the contents of the album being reviewed but rather to a connection between the album and reviewer, however tenuous.’ Happy to prove him right, I plead guilty to having established connections between albums and myself in the past, and I plan to do so in the future. While I realize this is not the most professional approach, I would like to believe that it’s part of this publication’s charm and in many cases more convincing than a strictly neutral approach.

Especially concerning our “Back to the Lab” section, writers tend to be inspired by the relationship they have established over the years with the album they pick. It’s quite different with me and Shifty’s “Happy * Love * Sick.” While I was vaguely familiar with the artist’s previous work and have my opinion on it, until recently his 2004 solo debut escaped me completely. It was in fact before I ever listened to “Happy * Love * Sick” that I developed an – unquestionably tenuous – connection to it.

For some years now I have been responsible for hiring new writers for RapReviews.com. The main obstacle to overcome in the evaluation is a test review, roughly structured like the published pieces and observing professionalism in bringing forth criticism but hopefully still containing a personal note. Experience shows that applicants are inclined to submit reviews of rap albums with a lyrical leaning. Some go more in the mainstream direction, others opt for obscure releases. I’m seldomly surprised by the choices, in regards to why they went for this exact artist or album. That is, until last year, when one – very articulate – applicant proposed to test review an album from the artist known to me as the lead voice of Crazy Town. Instead of playing it safe, the aspiring reviewer decided to test RapReviews’ own limits, a risky endeavor I couldn’t help but admire.

While the candidate ultimately didn’t pursue his quest to join the staff, his write-up of “Happy * Love * Sick” made me not only save a copy of the record from bargain bin existance, it also made me once more reconsider my own notions of ‘legitimate’ rap. Despite serious reservations, there is something about Crazy Town’s biggest hit, “Butterfly,” that fools me everytime. I have already pondered this in a blog entry I wrote for www.canibringmygat.com, where I profiled early ’90s production duo Wolf & Epic. In short, the latter became a founding member of Crazy Town, likely responsible for the band’s hip-hop influence on the instrumental side. Shifty himself apparently spent some time on the road as a hypeman with Soul Assassins duo The Whooliganz in the mid-’90s, but if I’m not completely mistaken Crazy Town was his first professional rap gig.

According to our test reviewer, Crazy Town underwent a remarkable artistic evolution between their first and second album. But just when the latter failed to generate the sales of the former, Shifty Shellshock found prominence again as a vocalist on the Paul Oakenfold single “Starry Eyed Surprise.” The 2002 track is included here, and it stands out with its mellow vibe and club finish. Maybe the drums tip the scale too much in favor of hip-hop, but if the purpose was to mix rap with house to score a pop hit in the process, it’s an evident success. The British star DJ was also involved in the album’s second single (succeeding “Slide Along Side”), “Turning Me On,” a bouncy tune with a potent rhythm section.

These songs land us squarely in the album’s first half, where we find ourselves surrounded by tracks that suggest Shifty put all his faith into the “Butterfly” effect. As simple love songs packaged as summery pop tunes they are competently executed, full of strumming guitars, bouncing drums and varied (male) background vocals. We could leave it at that, accept “Happy * Love * Sick” for what it is, a winsome if rather basic pop album revolving around age-old subject matter. For various reasons, however, rap has this heightened sense of awareness regarding craftsmanship, which causes us to rate rappers as soon as they appear on our radar. We don’t leave rappers be, even if being accepted into the hip-hop world is not on their agenda.

My personal findings are that Shifty is a painfully limited rapper. He assumes a submissive, infantile vocal tone that leaves no room for strength, for humor, for wit, for depth. While his voice may not be as grating as others, the puppy-dog eyes theatrics and schoolboy crush rhymes simply do not fit a grown man. The album knows few emotions besides cheerful and anxious. For the most part, “Happy * Love * Sick” reflects only the most trite teenage outpourings of affection. 90% of Britney Spears’ catalog is more slick, more subtle, more sophisticated than what is presented here. The lyrics are drenched in romantic and philosophical clichÃ©s. The music is boyish in every way, and from a rap critic’s point of view it’s hard to imagine it finding any other audience than giggling girls. (Which also makes “Lolita” with its sexual innuendo a little bit problematic.)

Occassionally it’s not as bad as it first looks. “EZ Cuz You’re Beautiful” seems to tread even shallower waters with its hook line “Loving you is easy cause you’re beautiful,” until you realize it references Minnie Riperton’s “Lovin’ You,” and discover that the lyrics do attain a minimal artistic level:

“Now when the sky is fallin’ down, girl, I found that you’re the cure
cause you’re the only thing that’s real when I’m feelin’ insecure
You’re always there for me when I need someone to care for me
Apparently you made the right move, rather carefully
So till the end I’m lovin’ you, kissin’ you and huggin’ you
even though your friends have got a different point of view
And after everything that we’ve been through, it’s really easy lovin’ you
(…)
Ooh child, baby girl, you got a place in my heart
You either hold my life together or you break it apart”

Also, just when you think that for the ‘Sick’ part one has to tune into Celebrity Rehab, Shifty introduces some of the demons that come back haunting him. The rueful “When We Were Young” recounts his troubled adolescent years with the album’s strongest lyrical performance:

“Time sure flies when you’re havin’ fun
I wish I’d walked through life but I chose to run
(…)
Back to my PO or rehab or up north to see dad
it’s just the way it goes when you were born to be bad
Actin’ a fool, skippin’ school, flickin’ off the principal
It’s hard for mom to believe me, but she’s so convincible
(…)
While you bragged to your parents ’bout your A’s and B’s
I was underneath the bleachers with the THC
A GED in chemical dependency
and a PhD in whiskey and stonerology
Another breakthrough in wasted-youth technology
You can learn from my mistakes but it’s more fun to follow me”

“Take Away the Pain” continues the pensive mood, this time focusing on emotions. Yet as heavy as the subject matter is, Shifty simply lacks the eloquence to elevate his writing. Not to add insult to injury, but a statement like “I’d commit suicide but I don’t wanna die” strikes me as so inane that it derails the entire song.

In the end there’s a cynical way to approach this album and an understanding one. Either you see Shifty as an opportunist who happens to have stumbled upon rap, learned to misuse it to attain rockstar fame, writes insincere, vapid love songs to get groupies, spends much of his solo album chasing the only hit he ever wrote and finally in a desperate attempt to revive his career joins one of these questionable celebrity reality shows. Or you can attest “Butterfly” and all the similar songs gathered on this album the power to make party people have a good time, loosen up a bit and maybe get lucky. You can point out that in many of these songs the significant other is depicted as a savior, and hopefully agree that not only Seth Binzer evidently needs to be saved from his addictions, but also that many of us feel an angel enters our lives when we meet that special someone. You can acknowledge Shifty as an “escape artist with no escape” (“Take Away the Pain”) and see songs like “Butterfly” as his refuge.

It’s apparent that Shifty has a lot of love to give (even his farewell to a dead friend, “A Better Place,” is not easily distinguished from the love songs), while he neglects loving himself. RapReviews.com’s – completely unprofessional – therapeutic advice would be that Shifty attempts to write more traditional, narcissistic rap songs and finds fulfillment in bigging up himself like every other damn rapper on this planet. That is to say that – all sarcasm aside – “Happy * Love * Sick” is definitely a break from the rap norm. Something our applicant was well aware of, even as his conclusions varied from mine. It is therefore with regret that I say that my prejudices about Shifty’s music were confirmed. Of course we can imagine plenty of situations where playing this music is completely appropriate, but at the end of the day (or the morning after) bad is bad.

Still, at least one reader and potential RapReviewer challenges you to give it a try. And I think I owe it to him to let him have the last word:

You will not hear the orchestral wizardry of Stoupe the Enemy of Mankind. You will not hear the neck snapping mastery of DJ Premier, and you sure as hell won’t hear a Daft Punk driven megahit courtesy of Kanye West. (…) The subject matter on this album is not groundbreaking by any means, don’t get me wrong, but there are just enough departures from the typical to keep this album from becoming too redundant. (…) What you are left with is an impressive rap album which impressed little to none in the legitimate hip hop world. (…) If you are brave enough to trade in the Henny and blunts for some Coronas and Marlboro full flavors for one hot summer day, you may find this album to be a rewarding experience, I did. – Music Vibes: 7 of 10 Lyric Vibes: 7 of 10 TOTAL Vibes: 7 of 10