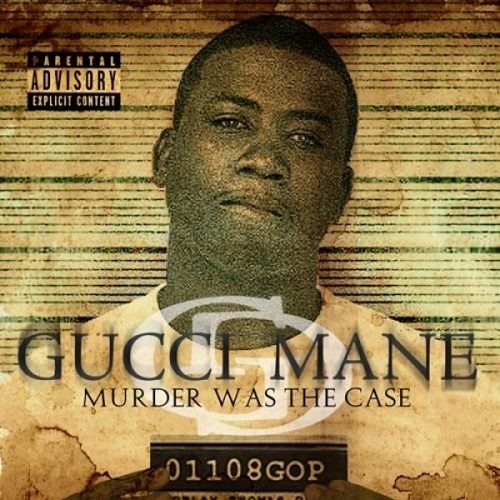 Gucci Mane :: Murder Was the Case

Birmingham, Alabama native Radric ‘Gucci Mane’ Davis is back with his fifth album in the last five years, “Murder Was the Case.” Those who haven’t been keeping up on his career may think the album name is a direct bite off 1994’s Death Row soundtrack of the same name, but intentional or otherwise there’s a definite parallel between Gucci Mane and Snoop Dogg. In the latter’s case he had to go to trial on real life murder charges, for which he was eventually acquitted. In the former’s case he was awaiting trial on murder only to have the case dropped in 2006 due to a lack of evidence. Both men undoubtedly received a publicity boost based on interest in the charges that helped their rap career.

It is here the similarities end. Snoop Dogg was already a huge star in both hip-hop and mainstream pop thanks to support from Dr. Dre and Death Row Records before his murder trial. Gucci Mane was with all due respect to Mr. Davis a minor star of the Southern rap scene best known for the single “Icy” with Young Jeezy. Observers will note that Jeezy has not appeared on a Gucci Mane album since, including this latest release, which was due to a dispute over who had the rights to the song when it started to hit nationally. Mane has been somewhat starved for mainstream exposure ever since, although 2007’s “Back to the Traphouse” tried like heck to get it. The album featured Mane’s best production to date and a slew of big guests from The Game to Lil’ Kim to Trey Songz.

There’s no doubt Gucci Mane hopes “Murder Was the Case” is a fresh start. Everything is new on this release – new label, new publicity firm, new homies (all clearly friends or labelmates – no big names this time), new rhymes… oh wait scratch that last one. Gucci Mane is what you would call an A to B rhymer as long as you left out the B part. I’ve noted in previous coverage of Mane’s albums that his rap style is simplistic, and though one would hope his style had changed or improved songs like the lead single “Stoopid” show little has changed over the years.

“Once I drop my verses then I go and drop the chorus
Then I’m out the booth back to my trap you know I’m Mooreland
10 to 4 restored it, Zaytoven record it
Zay you chargin 30 like the Gucci can’t afford it!
Gucci chargin 40 dawg, that’s a couple birdies
Gucci stupid jewelry dawg, I don’t think you heard me”

I honestly spent 15 minutes searching this song for six bars that didn’t completely embarass Gucci Mane. In the process I was treated to lines like “Our vests gon’ match our gators/you can’t swear like Gucci cause you don’t got enough flavor” and the unintentionally apt “Bitches are magnificent/I’m not very articulate.” The Zaytoven beat is acceptable at first, with the rapid-fire piano during the chorus sandwiched neatly between the bass and melody, but without that chorus the ZOOP ZOOP electronic sounds get irritating. Production is what Mane has to rely on since he can’t get by on the rhymes alone, and Zaytoven does his best to help. “Block Party” is an intriguing mixture of crunk and symphonic sounds that would stand alone as an instrumental – especially after listening to Mane rhyme “bonkers” and “monster” with “Hummer.” Ouch. The “Trap Money (Remix)” is minimalistic and a bit eerie – a perfect combination. Even when the songs have ridiculous concepts and rhymes like “Cuttin Off Fingaz,” there’s Zaytoven in the background trying to make the best of it.

Much is made of the fact Ox from the movie “Belly” appears on a short 18 second skit and the following track “Murder For Fun,” which may be one of the album’s strongest tracks. A. Cater and Mel-Man provide a heavy pounding beat and the reggae chattah of Ox really sets it off nicely. To be honest though I would have credited him by his musical name Louie Rankin instead of referencing him to a movie that is only notable for the number of rappers in it and the music video director (Hype Williams) who filmed it. I think it’s fair to say a number of people who buy this album will never have seen the movie and may think Ox is from a GROUP called Belly. “This song has Ox from Belly. He’s pretty good. You got any of Belly’s albums?” Something like that. Regardless with no disrespect intended to either Louie Rankin or Gucci Mane, I don’t think this album furthers either of their careers. I have a hard time getting through the songs on “Murder Was the Case” from start to finish. Even the “back in the day” real life narrative “Neva Had Shit” has tedious rhymes that make me want to fast forward:

“Stealin candy out the sto’ like I can’t get caught
Just a little bad black boy, it ain’t my fault
After school snack syrup and fo’ pieces of bread
Granddaddy why your eyes so God damn red?
Got a real soft ass and a hard-ass head
Better mind your fuckin manners boy that’s what he said”

That’s the extent of Gucci Mane’s rhyme writing ability – bread, red, head, said. It’s fair to say I’ve heard worse in hip-hop, but listening to Gucci Mane’s non-loquacious verbosity makes me pine for Mike Jones and Pastor Troy records. His exceedingly slow delivery and mush-mouthed elocution don’t help matters – Gucci Mane sounds screwed and chopped even without Michael Watts on it. Musically parts of “Murder Was the Case” get a pass but the album as a whole can’t be acquitted – Gucci Mane is guilty of making mediocre gangster rap on all counts.