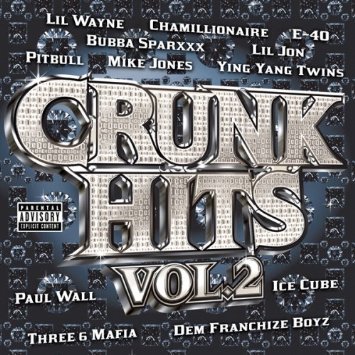 It’s damn near impossible to write a review for a compilation such as this. Regardless of what I say, I pick up the L, even more so than on any other review. I’ll never win because a “Greatest Hits” is often the face of an artist or genre. To a certain demographic, crunk music is the shit, against which no argument can be made. But there’s also a sizeable platoon of heads that consider crunk-hop to be on the same level as common waste.

Where do I stand? For one, crunk ain’t meant to be played on headphones, whoever you are, so that devalues it on one level. But in the club, nothing beats it. You can hate on it all you want, in your computer room listening to Organized Konfusion, but at the end of the day, its shameless get-down music. Who can argue with what it induces? Dancing your ass off with some Grey Goose in your system and scantily clad females as far as the eye can see? You’re beyond that, are you? Yeah. Right.

As far as crunk hits go, the second compilation of the same name truly delivers. Names like Dem Franchise Boyz, Gucci Mane and Lil’ Scrappy populate what would have to be the LOWER end of the list. You wanna get crunk up in this thang? Just how crunk do y’all wanna get? Bubba Sparxxx and the Ying-Yang Twins get it popping on “Ms. New Booty,” Paul Wall shines his pearly diamonds on “Sittin’ Sidewayz,” and of course you’ll want to “Go To Church” with Ice Cube (Cube on a crunk mix???). What crunk compilation is even a crunk compilation at all without the king himself, Lil’ Jon. You’ll have dreams of sugarplum pimp cups dancing through your head after the number of beats he drops, including “Snap Yo Fingers” and E-40’s “Tell Me When to Go.”

“Crunk Hits, Vol. 2” will sell for good reason: it’s an excuse to get off your ass and have a good time. Jeer if you want, shout and spit in its face, but crunk music lives on because it’s all about having fun, and there is absolutely nothing wrong with that.