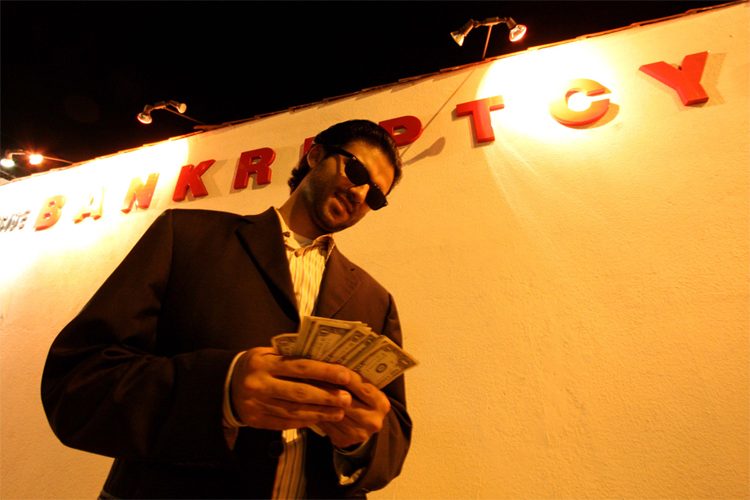 It takes balls to open a rap record with a mostly sung remake of Flock of Seagull’s “I Ran.” Even when reworked into “Iran So Far Away,” an ode to the immigrant to American struggle of Malkovich’s family performed in a faux-middle eastern accent, the fact remains that it’s the kind of left field introduction that might leave most hip hop heads scratching theirs. While it isn’t the best sonic representation of James Malkovich as a rapper it encompasses the “this is who I am, fuck you” vibe that rises “Bankruptcy” above the rest of the pack.

Malkovich started out as part of the underground Gershwin BLX crew in LA during the late 90’s and the manic acid tongue word play of that group remain alive on his current material. Songs like “Prohibition” show off a cocky yet passionate lyrical technique that makes for a snotty punk attitude without crossing into gangsta tough guy clichÃ©s.

Everything from the Wu-Tang worthy sparse 70’s movie soundtrack samples and snare production, to the seeming anger of the Malkovich’s delivery would insinuate a more violent record than “Bankruptcy” actually delivers. Indeed this record is about as close as Acid rap aggression and Backpack rap lyricism come without really falling into either genre.

The production here is worth a special note, though try though I may to find names of producers I’m stumped and the CD case wasn’t marked. The aforementioned “Prohibition” is a definite highpoint of “36 Chambers” worship, but “Fuck Promoters” staggering bass and funk percussion takes the track from angry rant to playful dis track, and helps keep the vibe of the record from getting too bogged down in scene politics. Out of these nineteen tracks there isn’t a beat among them that will make you reach for the skip button, a rare feat in any genre let alone hip hop. Seriously, when was the last time you listened to a record from start to finish without fishing for the “Next” button?

The ability to attack the worst of hip hop, behind the scenes and on the stage alike, keeps “Bankruptcy” from running out of lyrical and musical currency. “Dope” features James’ most passionate tirade against trend hopping labels and fans, as well as the record’s finest lyrical moments.

“What can I say, I got a steep bias
A rhyme mechanic, here to grease some squeaky tires
Waking up in a bad dream
Seeing geek promoters, managers and their geek clients
Now it’s so far, nerd raps all the rage
And one nerd signing checks means eight on stage
Put the mic down, go make some daisy chains
This is high intensity, get snapped like celery
I’ve lived a life of sin and rap’s the penalty
It’s a life of pain and rap’s the remedy”

From the point of view of a rap vet the influx of here today gone tomorrow hipsters in the game has diluted the musical gene pool, and Malkovich isn’t above taking the piss out of what he sees as worthless young bucks.

Now if only this dude could get radio stations to take notice and bring some of his righteous lyrical fury to the masses maybe he’d be able to go from album prophet to scene messiah. His blending of killer old school beats and modern day rap politics and storytelling shows Malkovich still has plenty left to bank on, and we should keep paying attention.