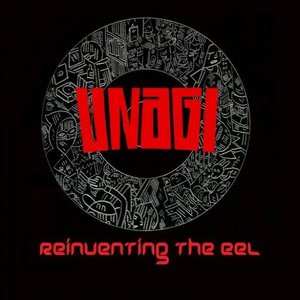 Unagi is the Japanese word for eel. This is a fact that I came to find out only after an overly ambitious sushi order. It’s not that unagi does not taste good, it just happens to be unconventional. Americans are not used to digesting certain foods. What is considered routine elsewhere is often times considered odd here and the opposite holds true as well. This makes Unagi’s album title even more interesting. On the most personal level “Reinventing the Eel” is merely Unagi’s clever way of informing us he is coming fresh on his new album. If you choose to expand the analogy “Reinventing the Eel” could be a concept applicable to many situations. The “eel” is any number of unconventional things we might encounter. The reinvention is the choice to perceive those things differently by perceiving them with normalcy. The concept fits Unagi’s album well even on this universal level. Those unfamiliar with his previous work can not attest to whether or not Unagi’s music is indeed fresher on this album. What they can do is perceive this seemingly unconventional album as they would any other album they would find on the shelf.

Convention is a completely social phenomena. It is defined by communities and adhered to only for fear of disrupting the community that agreed to those standards and laws. In our hip-hop community we have many conventions. Unagi defies those conventions. He names himself after an animal, in another language to boot. He carries the animal theme to his album title. He fills his album with instrumentals. He starts his album out with an instrumental. He features equally unconventional emcees such as Motion Man. Unagi wasn’t even a rapper/producer until ten years ago when he made the transition from noise-rock! One could treat Unagi like the hard to pronounce menu item and gloss over him for something safer, but we’re reinventing the eel today. We’re ignoring the conventions placed on us and instead ordering up that menu item and consuming it and judging it by its own merits, void of any societal interference. As such, Unagi does his best to help us forget that the task at hand is even a task. His production is smooth, dope, funky, fresh, and traditional all at the same time. “Liftoff” is a one-two combination of jazzy piano loops and hostile synth breakdowns that packs plenty of energy. “Grown Man” is drenched in laid back funk rhythms and live instrumentation. “Herb Man Theme” is a majestic, surreal mixture of funk and optimism, there really is no other way to describe it. Even when Unagi is being as conventional as an American eel producer can be on “Song of Satisfaction” he makes sure Eddie Meeks keeps you on your toes:

“I wrote sixteen bars on a very rugged mountain top
With waterfalls obeying new walls
I flow like fluid over metal
Bringing a song of satisfaction to the world
This is dedicated to a small rock spinning on its axis
In fact, consider this lyrical geographics
I’m 34 longitude, 84 latitude
Every time the planet move Southwest Atlanta move
Flow more colorful than Fuji photo
Meeks Jeet Kune Do
Dojo Memphis Ho
I’m sick like the red light district in Calcutta
My legacy will cover the world like wamsutta”

It really is a fascinating verse we get from Meeks, with plenty of clever references thrown in for good measure. Were this an Eddie Meeks solo album there would be nothing but praise, instead Meeks highlights this new experience’s sole weak point â€“ Unagi the Emcee. Unagi the Emcee is mostly absent on this “album.” In fact the only time he is clearly recognizable is on “U Stole My Heart” where he shows his limited rapping skills.

Overall, “Reinventing the Eel” is a refreshing new experience. As a producer Unagi brings plenty of innovation to the music without detaching himself from the genre. For all the dopeness, the lone weak spot is the emceeing. Unagi is hardly competent as an emcee. He limits himself to one track, but some of his other collaborators don’t quite hold up their end of the bargain. None of the emceeing is bad, but much of it lacks the luster needed to complement Unagi’s beats. Still, even with its shortcomings, “Reinventing the Eel” was an experience I did not regret undertaking. Receiving it with open arms only improved the experience as I was able to immerse myself into the music fully. Following convention, “Reinventing the Eel” is a producer’s album filled with short songs and esoteric emceeing. Ignoring convention it becomes 42 minutes of engaging music that is enjoyable despite its shortcomings.