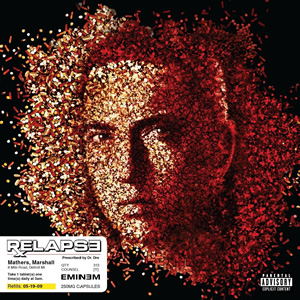 Guess who’s back. Back again. By now, you will be aware of the drugs, the weight gain, the marriage/divorce, the death of a best friend, the whole shebang… Everyone has been assaulted by a media blitz of epic proportions that very few artists could command, anywhere in the world. Well, Eminem can. He probably even has a gigantic ad banner at the top of this page this week – rest assured, dear Reader, I couldn’t give a fuck and nothing influences reviews on these pages other than the music. Regardless of the circus that follows Marshall Mathers, it is certainly good to have him back in the game, and “Relapse” is, along with “Tha Carter III” one of the most eagerly anticipated albums in the past 5 years. What matters more is that he is sober, focused and determined – that goes a long way when you are pretty much the biggest selling rapper in history, making a comeback after half a decade out lost in a chemical fog.

So, to start off – Em is in lyrical fury mode, Dr. Dre produces pretty much the whole album and there is a definite concept running most of “Relapse.” In fact, this feels somewhat like Eminem’s take on Jay-Z’s “American Gangster” LP (aside from both having intros by British actors from “The Wire”). Jay combines elements of his past with Hollywood fiction, dipping in and out of a rise/fall character; Mathers takes a similar route chronicling parts of his real life drug addiction and mixing them with a serial killer/rapist Slim Shady that “relapses” into pills, murder and sexual assault. It is darkly comic in places, but mainly shrouded in a sinister air of sex, violence and dense wordplay. An album of “We Made You” type of tracks this is not.

After two or three listens, it becomes clear that this is not your normal album from the Detroit native – “Relapse” is, regardless of the first single, not a mass market LP. Bizarrely enough, this is one for the FANS, the real Eminem heads. It is genuinely hard to imagine the casual music fans that once flocked to purchase his music even reaching three spins of the LP – they would be turned off by the excessive, over-the-top sex and violence combined with an almost unbelievable lack of commercial hit singles. If “We Made You” has received a somewhat lukewarm response – though it is certainly a catchy track – imagine pretty much nothing else, other than the intensely fascinating “Beautiful” and the vaguely fun but lazy “Crack A Bottle” (which wasn’t even deemed good enough to have a video). Throw in Em’s intense rhyme patterns, and selling a million first week seems a tall order.

Regarding those intricate verses, heads may not be too impressed the first couple of spins, but persist. Why? Eminem is on FIRE lyrically – it just takes a while getting used to his slightly altered flows. Take, for example, “Stay Wide Awake” – his rhymes start off pretty unimpressively, but his penultimate verse ends up being truly astonishing, technically. “Medicine Ball” and “Underground” find him kicking more old school flows, and it sounds simply brilliant, reminding us all what we’ve been missing. Other highlights include “DÃ©jÃ  Vu” and “Hello” – proving that the chemistry between Em and Dr. Dre is something special to behold. When it works…

Here is where we run into a few problems – surprisingly, the production is one of the issues with “Relapse.” It is clearly at a very solid level throughout, but doesn’t really contain enough true highlights, real classics. Some may argue that is necessary to let the star shine vocally, but certain tracks come across as flat, especially compared to the aforementioned highlights such as “Hello,” “DÃ©jÃ  Vu” and “Medicine Ball.” Yet other certain other tracks are simply there – “Same Song & Dance” is average, and “Must Be the Ganja” is plain bad; “Insane” and “Bagpipes from Baghdad” are more divisive, possibly pleasing as many fans as they turn off. The music isn’t a crisis situation, generally flowing well, but this certainly isn’t an LP overflowing with musical classics.

Another problem, at least on the superficial level, is the lyrical content. Although the excessive sex and violence can be justified by the presence of both character and concept, it gets a bit much at times, and to untrained ears (i.e. many of my friends) comes across as overly crude and immature. How many dicks can be sucked, rapes committed, murders committed? A lot in Slim Shady’s twisted world. Again, committed fans will be able to cut through this and focus on the point of the album – it is just doubtful that too many others will.

Out of Eminem’s previous five albums, I only still listen to one regularly – the “Marshall Mathers LP.” That, widely regarded as his magnum opus, has dated remarkably well, and will surely stand the test of time. “Relapse,” on the other hand, is probably destined to become a fans favourite. The focus is not on hit singles and world domination – no, the aim with the first installment of the “Relapse” series seems to be consolidating his hardcore fan base. Make no mistake; the true Eminem fans will LOVE this album. His lyrics, whilst not as naturally gifted as his â€œMarshall Mathersâ€ era rhymes, are still technically masterful (plus some awesome hooks), and he delivers, for the most part, on the concept of Slim Shady relapsing into his old chainsaw-toting ways and eventually coming through the haze of addiction. He even avoids any Proof tributes – stating that he couldn’t make a good enough song to act as a tribute. Maybe it will be on “Relapse 2” – or maybe Proof’s position was indefensible, who knows. Regardless, this album risks much in largely ignoring the whims of the masses, so it will be interesting to see how it does – especially since the few career highs come in the form of album tracks, not singles. His original army of fans, however, will surely enjoy most of the elements of “Relapse” and it certainly sets up the sequel nicely â€“ though it might be wise to include a few more crossover hits on the second installment, you know, for everyone else.