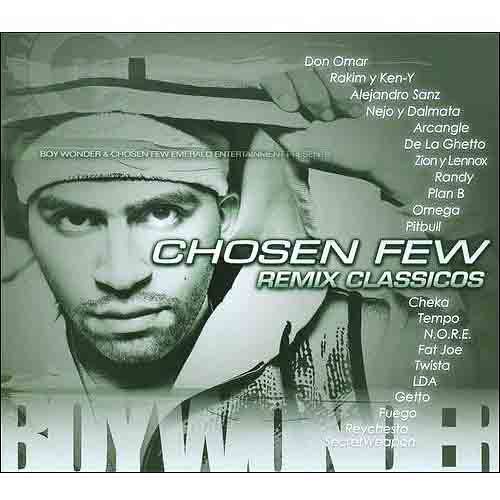 Branding is an important concept in the music industry and producer Boy Wonder has mastered that facet of the game. Instead of popularizing his name as a producer, Boy Wonder decided to create a whole movement around his production. He created “Chosen Few,” a group with no set members that released compilations. The only constant element in this “group” was the fact that it always featured Boy Wonder’s production. The concept was that one would be “chosen” to be on a compilation and thus would be in an elite group of artists allowed to perform over Boy Wonder’s production. The concept worked quite well, with the group and its CDs becoming very popular among the reggaeton scene. For those who might have missed the original Chosen Few CDs, their best work is collected on this CD. If you’re curious, the CD features everyone from singer Alejandro Sanz, reggaeton star Rakim, and rappers Pitbull, Twista, Trick Daddy, and Joell Ortiz.

The album is billed as “Remix Classics,” implying that all the tracks on here are remixes of some sort. To be honest I am not familiar with the bulk of the songs on here in their original form. The only track I am well familiar with is “Reggaeton Latino” and the remix provided here is absolute trash compared to the original. Boy Wonder’s synths suck all the life of what was originally a huge reggaeton anthem. The track is the first one of the CD so it painted a bleak picture of things to come, but thankfully the rest of the CD is much better. Ignorance may be bliss in this case as my unfamiliarity with the other songs may allow me to appreciate them much more than I might otherwise. “Mi Alma Se Muere” finds Pitbull flexing his smooth flow in both English and Spanish over a hyper merengue inspired track and works extremely well. I’d quote Pitbull’s clever verse, but it’d probably be lost upon the bulk of the readers since it is in Spanish. Boy Wonder then flips things with a laid back vibe on the next two songs. “Quiero Concerte” features an airy, pop melody and “A La Primera Persona” features an R&B feel to it. Twista shows up on “If You Know Who I Be” where the track has a dark, bounce feel and reggaeton rapper Reychesta tries his best to mimic Twista’s lightning quick flow. The compilation lacks a cohesive feel to it, but the variety should satisfy most fans. There’s a few duds mixed in the jams that should be noted. Trick Daddy and Trina are wasted on a completely uninspired remix to “Freaktona.” It sounds like the original was meant to be a hyper dance track, but the remix’s dark take sucks the life out of the song. The house mix of “Hoy” also sounds out of place as the remix is a very typical effort with a bland house beat and little else.

“Remix Classics” definitely has enough banging tracks to appeal to the reggaeton fan. While I haven’t heard the original version of most of these tracks, the bulk of them feature production that goes quite well with the vibe of the song. There are a few clunkers, but overall the CD is solid. The rap fan will likely avoid the CD since there aren’t enough dope rap vibes to be found on here. Pitbull’s appearance is solid, but he is in reggaeton mode with his verse. Twista’s appearance is dope, but the rest of the song is just so so and brought down by an average rapper. Trick Daddy’s guest spot is ruined by the beat and Joell Ortiz’s contribution is over an equally uninspired beat. The highlights of the collection are the numbers dedicated to the fairer sex and are sure to provide plenty of dance floor inspiration for fans of the genre. Overall, it’s not a bad collection from one of reggaeton’s better branded producers.