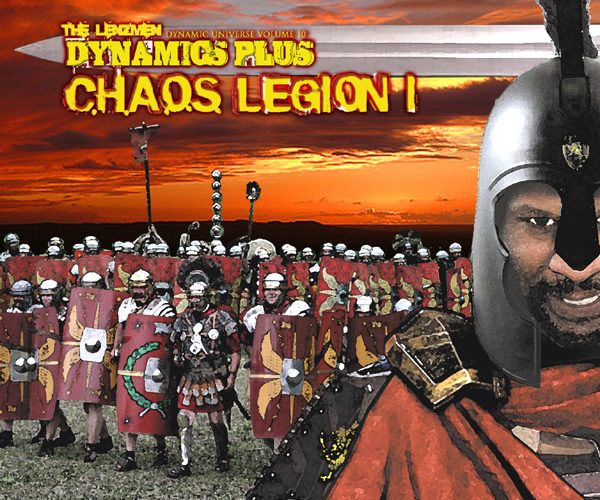 Dynamics Plus :: Chaos Legion I

Ambition is a quality that emcees often lack in the rap game. The lack of ambition can manifest itself in many ways, but most often emcees show their lack of ambition by delivering typical and average albums. You likely have encountered such an album in the last year. You head to your retailer of choice on a Tuesday and anxiously purchase the latest album from one of your favorite emcees and are instantly disappointed. You’ve heard similar songs before with similar punchlines and similar hooks. Nothing is necessarily bad about the music, but nothing is necessarily good about it either. As fans we don’t want rappers to redefine the genre with every album, but every now and then we do want a change a pace. Dynamics Plus is here to deliver that breath of fresh air with his latest project, “Chaos Legion I.” Despite his crew making music for over 10 years, Dynamics Plus and The Lenzmen are relatively unknown in the rap industry. Without the industry pressure, they are free to do what they want and defy conventions. In this case Dynamics Plus has taken the opportunity to make something quite unique to the rap game. “Chaos Legion I” is basically a hip-hop epic. It is a long story told through short rap songs. It’s what you would get if the movie “300” was told through rhymes and it’s quite engaging.

“Chaos Legion I” is an experience complete with sound effects. “The Magnificent Six” opens the album and is an intro that lays the foundation for the story contained within:

“It’s been six days, neither army giving way
Many were slain before the force that invades
On day eight he made a treaty and truce
To continue to lose and so we use our best troops
And their king is a glorious thing
So swift with the sword, some say it sings
A single flame he circles with a torch
Made a ring around the arena where our battle will be fought
They are called the magnificent six
Without a further hint he begins to sprint
The man transfixed and thinking a trick”

The rhymes continue to tell a story of a battle that began the current war which is described on the album. It’s quite well done, with even the music containing elements which give it a very ancient feel, while still remaining true to hip-hop. Interspersed between the tracks are also some interludes which are spoken and help move the story along. The story isn’t tied together as it could be, but each individual track usually tells a good story with vivid descriptions. Dynamics Plus keeps the story interesting with different voices for different characters, sound effects to go with the story he tells, and music that matches the mood of each story he tells.

Overall “Chaos Legion I” is a dope concept album and executed well. The passion is evident in the music and it is no surprise that in addition to his emceeing and production career, Dynamics Plus also has an independent comic book company. Despite all its ambition, the project does have some weak points that hold it back from being a complete success. I commend Dynamics Plus for the effort it took to construct and tell the story, complete with different voices, characters, and plots running through it. There are two main issues that hold back the album. First, despite the ambition and attention to detail, the story gets lost on the listener without very careful listening and replaying. Too many names get thrown out at times without enough background or explanation. I enjoy the individual stories, but at the end of “Chaos Legion I” I was not entirely sure of the entire story. The other issue is that despite the execution, as an emcee Dynamics Plus could benefit from a smoother flow. Dynamics Plus flow does not detract from the album, but a smoother flow could help the stories flow smoother and stick to the listener easier. Even with these two small gripes, “Chaos Legion I” is recommended to those looking for something different and ambitious in their music and wouldn’t mind a hip-hop album that is also a movie and comic book all rolled into one.