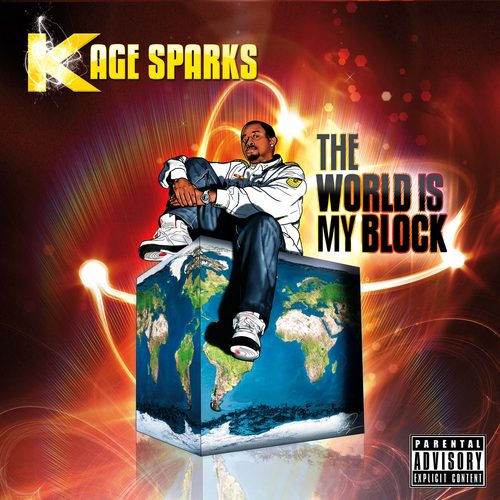 The World is My Block

Kage Sparks :: The World Is My Block

Kage Sparks is in the building! A name that most probably means very little to you right now, sure. But give him time. If Grip Grand supplied last year’s surprise on my Year End Review, with his incredible “Brokelore” album topping the list ahead of Lil Wayne, T.I., Nas et al, we have an early contender for 2009’s shock package. This year has yielded very few high quality albums thus far, and though Jay-Z and 50 Cent will definitely release albums in ’09, the spot is still wide open. And here we have a genuine contender. Kage Sparks.

It is a truly wonderful thing when you listen to the debut of an MC that has clearly put so much thought and effort into both LYRICS and CONCEPT, one that flows almost seamlessly from start to finish. “The World Is My Block” is an album that will take you a few listens to figure out properly, but upon each subsequent listen, you will discover a multitude of clever little touches. The production is consistent throughout, ranging from solid to superb; the choruses are almost all deceptively catchy; but really and truly, it is the artist himself that the show rightfully belongs to. My first couple of listens to the TWIMB left me a bit impressed – after persevering, however, the depth of the album became apparent and it proved easy to become immersed in the concept and lyrics.

So just who is Kage Sparks? Well, in all honesty, he doesn’t give too much away on the first album – instead, he thrillingly inhabits the character of an MC that is part hustler, part playboy, not to mention deep-thinking philosopher. In other words, a genuinely well-rounded personality – perhaps not his own, but know that it works very well. As a truly international rapper, globe-trotting between America, the UK, Europe and Africa, he seems able to draw on inspiration for any kind of track – be it a straight-up sex track for the ladies (the sultry “Room Service”), the lush soul of “Ghosts of the City” or the bashment-indebted “Sex Drive.” But it is when he blankets a hip hop instrumental with a strong concept that he truly comes alive. Over fifty or so minutes, he details a loose rise and fall story of sorts – albeit one where he starts off with years of experience under his belt. After all, in real life Kage Sparks, under various guises, has successfully battled all over the globe, been an “8 Mile” finalist, ghostwritten for stars and opened shows for Lil Kim, Amerie and countless others.

The album starts off with Sparks literally bursting through from the underground – a somewhat obvious yet effective metaphor, as we will later find out. The banging horns of “Kage Sparks” (with a stomping beat by Rymez) open the LP, and it is followed by a Blesstar quick one-two: the “two” being the brilliant “World Star.” After a couple of tight club tracks, we get into the more conceptual core of the album: “Bigger Than Life” is an excellent deconstruction of music industry bullshit, with Kage getting his Slick Rick on, and is let down by the only weak beat on TWIMB; the Timeless-produced “Stand Out” is already my feel-good anthem of the summer, and comes at the conceptual high point, where everything is going his way; “Celebrity Crazy” is basically what Eminem used to do well a decade ago (verbally bitchslap celebrities) but in a clever song format, as by the end of the song, Sparks realises that being famous ain’t all it’s cracked up to be, and gets booed off stage. The song is a straight up CLASSIC, and acts as the perfect precursor to a more soulful second half – one that chronicles the downward slope of his fortune.

Following a lovely skit, “Ghosts of the City” is pure aural gold – though, perhaps, not containing the best verses on the album, it is still unskippable and the Mercury Star beat is almost Dilla-esque. A couple of female-focused tracks follow, with the clever “Taser” followed by the awesome “Want You” – the latter courtesy of Keyboard Money Mike, who delivers a catchy club classic. “Want You” shows Kage out of control with the women, as his career failure spurs him on to cheat – his wifey, however, finds out and on the stunning double-feature of “Mr. Polygamist” and “Runway to God” delivers her retribution. The weird outro seems unnecessary until you start the album again – and it all suddenly makes sense (hey, I’m not going to spell out everything for you). After a few listens, you realise just how deep an album “The World Is My Block” really is, and I haven’t been able to stop listening to it for weeks now. Clever lyrics and lines keep appearing every time I hear tracks like “High Society” and even songs such as “Take Off” which is, let’s face it, a bit reminiscent of Timbo/Danja circa ’06, you can’t help but admire how Kage Sparks just rocks practically anything put before him. It is almost frightening to imagine him with major label support and access to top-draw producers.

There are a few very minor quibbles with the album, the first being the mix of the chorus vocals – in certain parts, the singers sound a bit out of place, engineering-wise, although perhaps it is just noticeable to annoying audiophiles like myself. The second is the over-usage of his team – Scribe Johnson is clearly a lyrical beast, not to mention a superb deliverer of choruses, but appearing on six or seven tracks is just a bit excessive, and when combined with the admittedly brilliant female singer (mysteriously credited as “J.Bella”) that appears on seven or eight songs herself, it could start to feel a bit too Black Eyed Peas (post-Fergie). To his credit, Kage Sparks doesn’t let that happen, but he has to fight hard to control the general feel of his debut LP. At least his boast at the end is backed up by his actions: “Smile on my face cos I left you with a CLASSIC!”

In all seriousness, this is what “Relapse” album was supposed to be like. Take a dash of Jay-Z, a sprinkle of Nas and a strong hint of Eminem – the end result? Kage Sparks. Yes, he is potentially that good. Don’t get me wrong: he may have been involved within the music industry for a while, but until you drop your own full-length feature, you’re in the little leagues – Sparks isn’t a seasoned vet with six albums under his belt. If this were a second or third LP, I would recommend it as very good, but as a debut it is astonishing. The amount of hard work and raw talent that has gone into “The World Is My Block” shames many an MC with ten times the budget. His lyrics are almost universally excellent, only dipping on a couple of tracks. Luckily, the music is of a high enough caliber to provide inspiration, and there is the perfect blend of club bangers, social commentary, songs for the ladeez and brilliant story-telling (there are moments on “Mr. Polygamist” when he reaches near-Biggie levels of tale-weaving, and “Celebrity Crazy” makes “We Made You” look amateurish). You don’t really get concept albums that are well-balanced, but this manages it without sounding too music-by-numbers (cough cough, Jadakiss) and as a listening experience it flies by. This is an essential purchase for 2009 – a near-perfect commentary on the state of the music industry that is, miraculously, well-balanced and enjoyableto listen to. More importantly, it hails, potentially, the debut of a new star that just might make it big. Kage Sparks.