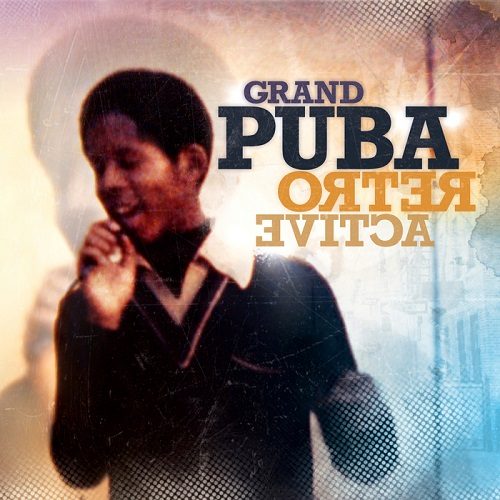 “Here comes the Puba and you know I won’t fake it/Usually bust records on gettin butt naked.” Maxwell ‘Grand Puba’ Dixon has been a study in contradiction since the earliest days of his recording career. His Brand Nubian crew is long recognized for their political and social activism, and usually the sharpest darts at ignorance and racism are thrown by Puba himself. By contrast his solo material has advocated some decidedly un-Godly behavior – drinking 40’s to the head, being sexually promiscuous, and being a money-spending nightclub partygoer. Far from being a source of controversy though, it is the very contradiction of the man who plans to “civilize an 85’er” while succumbing to the vices of the world that has made him popular over the years. Puba’s laid back and conversational New Rochelle flow gently floats into your ear, so even when he’s harsh you never feel preached to, and when he parties you want to roll too. After two decades of putting out records individually or collectively, he may not be the best known rapper in the industry, but he’s consistently rated one of the best mic controllers in rap history.

There’s another significant contradiction to Grand Puba’s career though – his popularity versus the number of solo albums released. Most highly regarded rappers try to drop at least one album every couple of years, but for Dixon the gap between his joints has gotten LONGER each time out. Three years passed between his first and second effort, six more ’til the third arrived in stores, and it’s been EIGHT years since “Understand This” dropped. That’s not to say Puba has been inactive. He has participated in some Brand Nubian albums in those intervals and he’s been “on the scene” in general, but Puba goes so long between his own joints he actually goes from heavily anticipated to almost forgotten. You really couldn’t blame even the tiniest of mom & pop record stores for not having any of placard with his name in the racks, because you can’t really reserve a space for a man who goes that long between releases – for better or worse GS Boyz probably gets that spot. They may want to make some room for “RetroActive” though, a purposefully double capitalized title to remind us that Puba is old school but STILL brand new (pun unintentional). Puba opens the album with the soulful PHD produced “I See Dead People,” with Lord Jamar on the track and Rell singing the hook. Puba’s still black and proud in ’09:

“Keep ’em in line with the crack of the whip
Teach ’em their history started with slaveships
‘It’s time to look past all that’ – man, please
How many of my people done swung from trees?
How many of my people in the past be lost?
They constantly remind us of the hol-o-caust
But when we speak on it, they say that we whining
Snatch your resources down to your last diamond
I do this for my ancestors
Ain’t nobody alive gon’ tell me I should let that shit ride”

In typical Puba Maxwell fashion though, the vibe doesn’t stay political for long, and right away the next track “Hunny” is about a fly female he wants to hook up with. Alternating between singing and rapping over Grant Parks’ track, his playful braggadociousness is a Puba trademark, although he’s a little more serious than in days past.

“So c’mon baby tell me what’chu wan’ do?
I know you feelin me, I’m feelin me too!
We can flip it to a next situation
Poppa ain’t a rolling stone cause I deaded my temptations
I’m focused now, no time for skirt chasin
[…]
I ain’t that wild dude that I used to be
But I love your moms and pops, custom made you for me!
So – let’s kick it girl, is you with it?
Like hot peas and butter baby, come and get it”

On “RetroActive” Dixon strikes a careful balance between making sure he’s in the spotlight while linking up with guests who can set things off right. The guests too are carefully chosen to remind listeners of Puba’s longevity in hip-hop, working with fellow veterans of the game as opposed to rapping with every hot new flavor of the minute. Q-Tip produces and guest raps on “Good to Go” on a track that could easily have been a bonus joint on “The Renaissance.” The follow-up is another double dip of dopness as Large Professor goes behind and in front of the boards on the outspoken “Same Old Drama.” The only downside of that song is that it’s only 90 seconds long! “This Joint Right Here” featuring Kid Capri is a high energy, bouncy keyboard track taking you straight back to the early 1990’s on a “Reel to Reel” tip. He also shows up on the remix to close the album, while Nubian cohorts Lord Jamar and Sadat X share the spicy spotlight. Puba is clearly having fun on this one, and even when he and crooner Talee say you should always “Go Hard” it’s clear Puba doesn’t have to – his talent comes naturally.

“Yeah, I’m focused; straight ahead, no lookin back
I’m like Kobe and LeBron goin to the rack
So what it is? Let me know if you’re feelin that
Don’t be like that other chick ma, holla back!”

That’s not a bad idea – holla back at Grand Puba on “RetroActive.” Some rappers who have been around as long as Puba that drop a new solo joint seem desperate to cash in on their glory days despite having faded vocals and cornball rhymes that don’t fit the now scene. Puba on the other hand is so old he’s all brand new again, the figurative and literal hip-hop throwback that’s still in fashion.