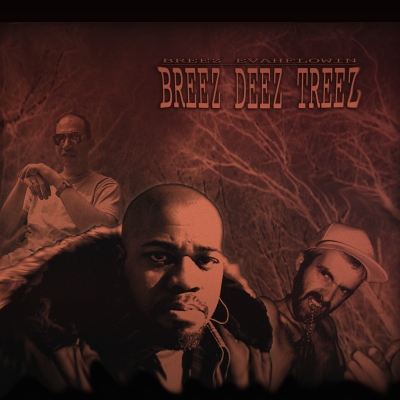 It is the reality that everyone has their own battles. Even with his big break on MTV’s “Direct Effects,” proving victorious as a vicious battle rap champion and as an integral part of the Stronghold Movement consisting of Poison Pen, C-Rayz Walz, DJ Static, and Immortal Technique, New York’s Breez Evahflowin lives to tell about his own struggles. Relocating to North Carolina and working with producer Dave Archuletta via internet, Breez honed in on his skills as a more insightful emcee and used his own knowledge to manifest through his music. With the time to gather his thoughts and reflect on his most personal accounts, Breez utilizes his unique artistry for his latest album “Breez Deez Treez.”

“Breez Deez Treez” explores a new side to Breez Evahflowin that reveals his contemplative thoughts and feelings while exposing the truth behind his rhymes. As he maintains the constant fervor and vehemence that has never seemed to cease through the years, Breez delves deep into a journey of self-exploration and the reality of life-long conflicts. The album commences with an example of this sentiment in “Background Music” which shows poor choices and harmful influences have negatively affected him as he says, “It would have popped by now my fifth album would have dropped/I could have just dwelled on what I could’ve got.” It is apparent that his past actions weigh heavy on his conscience in “Over” and “I Failed” which confirms how he feels solely accountable for the lack of success of the Stronghold Movement, yet he acknowledges he never stopped trying as he professes:

“Cause everyone that I run with is true
And when done and said
What did I prove?
So much more I wanted for you
I tried, I failed
To put us on top
We all about as good as it got
As a combo Stronghold stood as the rock
It’s a long road from the hood to the props
I tried, I failed, but I never stopped”

It’s a shame that Breez constantly doubts himself and his accomplishments because he is in fact, a skillful artist. Fortunately, after all the confession of shame, Breez finally recognizes his skills as an emcee in “Luck vs.Skill” featuring Swave Sevah and Ike P and accepts that his hard work in the rap game has definitely paid off in “I Know.” His self-reflection deepens in “Within Me” as he is “attempting to break the hate within me” and realizes his inclination to help others in need in “Rope.”

Another side to Breez takes shape in his more profound tracks in the perhaps fictional or factual “Dot, Dot, Dot” which recounts the life of child who was once witness to her mother’s murder by her father and later reunites with him when she is older before he his executed because the tragedy seemed to have follow her through the years.

Breez’s most poignant track, “Moms,” shows his relationship and appreciation for his mother who lost her battle to cancer. In this touching story of love and loss, Breez provides a detailed account from beginning to end of what mother’s pain and suffering and how he has slowly learned to cope with the misfortune as he says:

“The doctor said they going to bury my mom soon
And by the doom, consumed
I spill a tomb all alone in my room
I don’t zoom back
Of how the daylight strike
Living room cracks
In mama room black
This a true fact, but I never knew that…
It’s hard to swallow tomorrow without your loved ones
Cussing at these fuckin’ diseases and who discovered ’em
The big “C” is a mother, son”

It is both familiar and comforting when one can relate to an artist as Breez transports his audience to this level. Although he leaves behind the once forceful, intense effervescence, he in turn, uncovers a more restrained and insightful character in “Breez Deez Treez” that has never been seen before. Undoubtedly, Breez Evahflowin is one of those souls who truly understands what true hip hop once was and is supposed to be as this knowledge clearly transcends through his music.