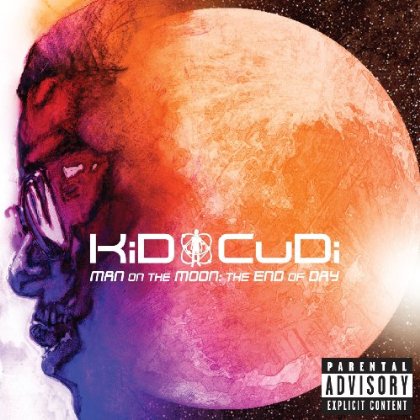 Man on the Moon

“Long before we know ourselves, our paths are already set in stone, some may never figure out their purpose in life, and some will. There are a lot of us who are caught up in this hell we all live in, content with being blinded by rules and judgment. We live in a world where it’s more okay to follow than to lead. In this world being the leader is trouble for the system we are all accustomed to, being a leader in this day and age is being a threat. Not many people stood up against the system we all call life, but towards the end of our first ten years into the millennium, we heard a voice, a voice who was speaking to us from the underground for some time, a voice who spoke of vulnerabilities and other human emotions and issues never before heard so vividly and honest. This is the story of a young man who not only believed in himself but his dreams too. This is the story of the man on the moon.”

These words, spoken not by Kid Cudi but his album’s narrator Common, at the close of the opening track of “Man on the Moon” sum up the last few years in the life of Scott Ramon Seguro Mescudi. A little over a year ago he dropped his first mixtape, the ground breaking “A Kid Named Cudi,” via a free download off the urban fashion brand 10.Deep’s website. “A Kid Named Cudi” took the twitching soul of modern indie rock and smashed it into the subtle keyboard blurts and low key snares of backpack rap. It caught the ear of Kanye West, got Cudi signed to West’s GOOD Music label, and landed him a guest spot on “808’s and Heartbreak”‘s track listing, as well as providing a major inspiration for the album’s decidedly unhip hop tone and flavor. That tape has taken him around the world, opened a thousand doors, built him a fanbase, and changed the musical outlook of one of the rap game’s most notorious ego freaks. Now the time has come for Kid Cudi to ask fans to purchase his product, but even after the massively addictive free taste he dispensed with “A Kid Named Cudi” the question remains if he’s been able to catch lightning and live up to the uncut quality of his introduction with the second round.

Whether “Man on the Moon” catches on with music listeners or is the biggest hype bomb since Canibus doesn’t matter in the realm of art. Regardless of if this record launches Kid Cudi into the stratosphere of hip hop royalty that makes him the next Kanye West or if he ends up hustling mix tapes on the corner in another two years broke as hell, “Man on the Moon” is an artistic high water mark for a genre where musical evolution happens as often as Fox News says something nice about Obama. Everyone who offers up production, be it typical hip hop mainstays like West and Emile or indie rockers like Ratatat, has an understanding of what they need to provide to guarantee Cudi releases a cohesive album, and not just a collection of hot records. Fans worried by the inclusion of hipster approved indie rockers Ratatat and MGMT in the track listing will probably find themselves hard pressed to pin point which of the songs they appear on without Cudi’s respective shout outs.

The idea of worrying about who’s contributing to each track melts away about halfway through the record’s second song “Soundtrack 2 My Life” and the listener gets wrapped up in groove of guitar, keys, and Cudi’s thoughtful verses. The addition of Common every few tracks to help ease the transitions between the different movements of the record, “The End of the Day,” “Rise of the Night Terrors,” “Taking a Trip,” “Stuck” and “A New Beginning” gives the album’s story arch from the depth of depression to heights of his current situation a rags to possible riches depth, not unlike some kind of hip hop Dickens. This isn’t a record about getting a label chain. It’s a record about panic attacks, hopelessness, depression, and rising above.

The aforementioned “Soundtrack 2 My Life” is the first time you hear Cudi rap on the record, after a soulful crooning spell on the opener “In My Dreams,” but it’s really the record’s opening track. “In My Dreams” is a great intro, but you don’t really see the meat of what you’re about to experience until “Soundtrack.” Inside you see the soul of a man raised on hip hop bravado but finding nothing in his own life to justify the kind of “fuck the world” chest thumping his heroes find so easy. The first verse gives you a hint of who Cudi is:

“I got 99 problems and they all bitches
Wish I was Jigga Man, carefree living
But I’m not Sean or Martin Louie
I’m a Cleveland nigga rollin’ with them Brooklyn boys
You know how hard it be when you start livin’ large
I control my own life, Charles was never in charge
No sitcom could teach Scott about the drama
Or even explain the troubles that haunted my mom
On Christmas time, my mom Christmas grind
Got me most of what I wanted, how’d you do it mom, huh?
She copped the toys I would play with in my room by myself, why he by himself?
He got two older brothers, one hood, one good
An independent older sister got me fly when she could
But they all didn’t see, the little bit of sadness in me, Scotty”

Then the chorus kicks in to drive home the cat’s willingness to show his heart sewn tightly on his sleeve. When Cudi sings “I’ve got some issues that nobody can see, And all of these emotions are pouring out of me I bring them to the light for you, It’s only right, This is the soundtrack to my life, the soundtrack to my life” he’s making a comment about an entire generation of men raised to believe they need to hide the pain inside while trying to write music that brags about its realness. How can you write the soundtrack to your life without opening up about your weakness? In Cudi’s world you can’t. The venting of his emotional ulcers continues with the second verse:

“I’m super paranoid, like a 6th sense
Since my father died, I ain’t been right since
And I tried to piece the puzzle of the universe
split an eighth of shrooms just so I could see the universe
I tried to think about myself as a sacrifice
Just to show the kids they ain’t the only ones who up at night”

There is a shocking bravery to this kind of admission in a hip hop song. Cudi lets go of pretense, and lets the kids listening at home know he isn’t a superman. He’s one of you, and no amount of cockiness will change the fact that he’s felt like shit too.

“The moon will illuminate my room and soon I’m consumed by my doom
Once upon a time nobody gave a fuck
It’s all said and done and my cock’s been sucked
So now I’m in the cut, alcohol in the wound
My heart’s an open sore that I hope heals soon
I live in a cocoon, opposite of Cancun
Where it is never sunny, the dark side of the moon
So it’s more than life, I try to shed some light on a man
Not many people of this planet understand”

The depression almost becomes overwhelming, but Cudi has moments where he’s able to see that self confidence is a must in a world of haters and blogs with nothing better to do than shit on artists. Regardless of his ability to brush the shit talkers off his shoulder he’s still aware at the struggle of life.

“It’s close to go and trying some coke
And a happy ending is slitting my throat
Ignorance the coke man
Ignorance is bliss
Ignorance is love, and I need that shit
If I never did shows, then I’d probably be a myth
If I cared about the blogs, then I’d probably be a jackass
Don’t give a shit what people talkin’ bout
Haters shake my hand but I keep the sanitizer on deck
Hope I really get to see 30
Wanna settle down, stop being so flirty
Most of the clean faces be the most dirty
I just need a thoroughbred, cook when I’m hungry
Ass all chunky, brain is insanity
Only things that calm me down, pussy and some Cali trees
And I get both, never truly satisfied
I am happy, that’s just the saddest lie”

Yet even when he’s given everything he thought would make him happy, women and weed, he lives with the knowledge that each one night stand and ounce is temporary and he’s still alone. It’s heavy shit for a rap song, let along for the beginning to an album. But “Man On the Moon” is a journey, it takes you from these depths of sadness, to the last verse on the album on “Up Up and Away” where Cudi is able to say:

“Higher learning I’ve seen the dreams I’ve made
so I’m cooler now
I can take care of my mom and my little niece Zuri
so sing along, little mama
You ain’t gotta worry about no drama, no
I provide for friends and fam and fans
a Cleveland city grinder man
stay afloat, the key is hope
I never let a muthafucka break me, dawg
who gives a fuck if a nigga don’t like your steez
tell raise off your N.U.T’s
we don’t care what people say
Dude’s who critique your clothes are most gay
I ain’t gotta wait for no one
if I wanna fly, I can fly for freedom, hey!”

“Man On the Moon” is a journey. And as a reviewer I have to ask myself, “should you ruin the middle of the record just to make sure people know if everything here is classic?” The answer is a sound no. Not everything here is classic. I’ll never get why “Enter Galactic” was included on the album and not as a iTunes bonus track, cause even though it’s a fun distraction it’s easily the album’s weakest track. But the complaints I’ve got are all nitpicking about snare sounds or the odd weird melody. And in the scheme of the album as a whole they’re not even worth deducting a point on Cudi’s score. So there’s no benefit to you, the reader, for me to ruin the surprises, observations, and knowledge Kid Cudi unleashes on his proper debut. If you want to know further why this album is a classic you’ll have to check it out yourself, but know for a fact it’s well worth your fifteen dollars. You only get more art by supporting it when you get the chance, but even if piracy or money woes make this Cudi’s last album we’ll always have the “Man on the Moon.”