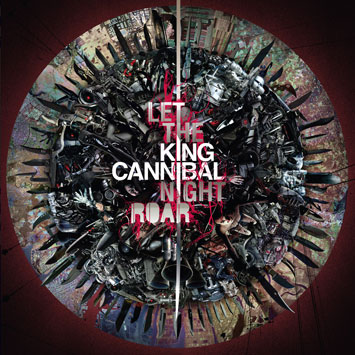 Dylan Richards a/k/a ZILLA has what might be called the prototypical background for an experimental house/techno/hip-hop/trance/dub artist – unsatisfied art school student by day with a side gig making music at night. His Ninja Tune bio sports phrases guaranteed to make his meteoric rise sound impressive, describing his sound as “the link between [the] party starting crunk of Lil’ Jon and the dancefloor destroying sonics of The Aphex Twin.” Surely this is high praise given the large number of records the artists named have sold, not to mention how their sound has shaped the musical landscape as we know it. In fact reading it one would hardly think this was his DEBUT album for Ninja Tune – you’d think it was the 10th in a series. ZILLA sounds like he’s been using his revolutionary uptempo electronica to break people off on the dancefloor for years, and possibly break a few ankles too as people try to keep up in vain.

One thing’s for sure listening to King Cannibal – there is plenty roaring in the night. Songs like “Aragami Style” are made for the party, after-party, and after-AFTERparty. This is the soundtrack for being sweaty, high, drunk and buzzed. Lyrics? Forget about it. Things are flying by your head at NASCAR speed, and you only have time to react in a jerky rhythmic manner. Even melody seems to come about only as an afterthought. The ZILLA sound is all about the heavy bass, the big beats, and the feeling of being totally spent after six minutes and fourteen seconds. You’ve got just long enough to grab a sip of your drink before he slams you over the head with another pounding bassline and the lights around you start flashing on and off.

When a ZILLA song on “Let the Night Roar” says “featuring {fill in the blank}” don’t bother contemplating it for long. Names like Jahcoozi, Daddy Freddy and Face-A-Face flit in and out, and their contributions are completely awash in ZILLA stomping all over the track like his Japanese namesake. At best they might be adding a single syllable or a repeated shout into the mix, or a few words that aren’t even comprehensible to english speakers anyway. Even in whatever native tongue they are spoken they’re going far too fast to be more than guttural noises accenting his beats, and on songs like “Virgo” ZILLA chops them up at will. Song titles are also largely meaningless here. What force does “A Shining Force” claim to shine for other than the dancefloor? What “Flower of Flesh and Blood” is being planted, and when will it sprout seeds? No one dancing OR listening to it will care.

You may have gathered along the way that “Let the Night Roar” is not quite my cup of tea, but like so many promos sent to me with earnest pleas for coverage, I decided to give this one a spin. On the plus side I get a vague sense of Japanese anime influence in the pulsing beats and pop culture samples, but nothing sticks for long enough for me to tie it to anything. On the minus side there’s no point in trying anyway. The tracks could have been titled 1-11, or A through K (homeboy) and been just as relevant… which is to say they’re not really to me. I was never much for the rave scene anyway. If you like glow sticks, strange drinks, and highly illegal pharmaceutical mind altering substances, the night will roar as loudly as King Cannibal proclaims it to. Otherwise this might be some good background music at a trendy dining establishment, but searching for substance here is a needle exercise and the size of the haystack gives me a headache.