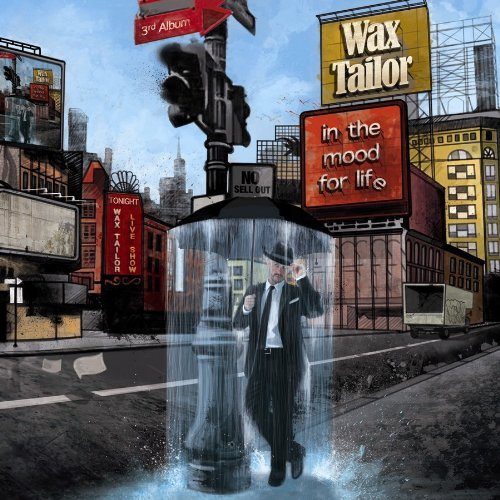 Wax Tailor :: In the Mood for Life

“In the Mood for Life” is the third album by French producer Wax Tailor, following his 2005 debut, “Tales of the Forgotten Melodies,” and 2007’s “Hope & Sorrow.” I got my introduction to Wax Tailor when I saw him live a few weeks ago. He looked like a French Moby, hiding behind his decks and laptop, and was accompanied by not only rapper Mattic and singer Charlotte Savary, but by a cellist and flautist as well. It was the perfect compliment to his cinematic sound, and a clear indication that he’s not your typical hip hop producer.

On record, as on stage, Tailor comes across as a mix between DJ Shadow and Portishead. His music contains the brooding elements of trip hop, and Savary’s beautiful voice is a nice substitution for Portishead’s Beth Gibbons. This is paired with the hard-hitting beats of sampled hip hop. Wax gets a warm, heavy drum sound similar to DJ Shadow’s early work, and he orchestrates samples in a similar way to Shadow. Not that I’m accusing him of being a copycat; Tailor does his own thing, and “In the Mood for Life” isn’t derivative.

He features a handful of rappers on the album. Speech Defect rocks the mic on “B-Boy on Wax.” It’s bouncing old school hip hop with wax cutting and scratching and the flautist going nuts. It might sound a little odd to have a flute rocking out on a hip hop track, but it totally works, adding a jazzy element to the song.

Mattic, who is from Le Havre, France, by way of North Carolina, is featured on two tracks. He was incredible live and almost as good on record. “Until Heaven Stops the Rain,” is about how music grounds him through financial and marital chaos. He also shares the mic with Charlotte Savary on “Fireflies.” Female rapper Voice offers her sultry rhymes on “This Train,” and ASM raps about child soldiers and the homeless on “Say Yes,” “bringing drama like a suicide bomber.” Tailor stays away from well-known features, concentrating instead on rappers and singers he’s familiar with, and the result feels like a true collaboration rather than just an attempt to sell records. Anyone can pay a rapper to phone in a few verses, and Tailor wisely concentrates on working with artists who fit in with his moody beats.

Charlotte Savary sings on four of the songs. She has a gorgeous voice that is seductive and haunting, which perfectly matches the music. Sara Genn sings on the delicate and melancholy “Dry Your Eyes.” While Savary and Genn’s songs are downtempo, Tailor also does two uptempo R&B tracks. Charlie Winston sings on “I Own You,” and Dionne Charles channels sixties girl-groups on the upbeat hip hop soul “Leave It,” one of the better songs on the album. As with the rappers, the singers are all well-chosen and fit well with the songs.

One of the best tracks, “No Pity,” doesn’t have any vocals at all. Instead, it chops up a plethora of samples into a booming beat, with a sample of a blues singer moaning, “there’s no pity” as the hook. Like all of Tailor’s music, it references sixties jazz and soul and backs it up with some good old boom bap. The result is some of the finest three minutes you’ll find on any album released this year.

“In the Mood for Life” is an excellent album. Wax Tailor uses the pronounced backbeat of hip hop to explore jazz, soul, R&B, and trip hop, and does so deftly and with style. In many ways, this album is the long lost French cousin of DJ Shadow’s “Endtroducing,” and is highly recommended.