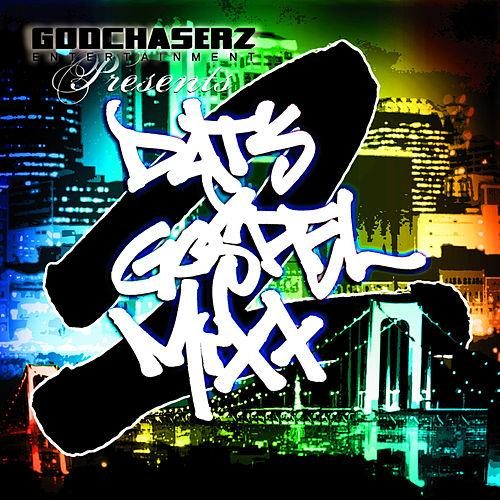 In case you couldn’t tell from the title of this compilation or the name of the label it’s on, “Dat’s Gospel Mixx 2” is Christian rap. Christ is front and center on all of the songs on the album. For the believers out there, that’s all you need to know, and you can pick this up and bang it to your heart’s content. For the non-believers out there, like your faithful reviewer, “Dat’s Gospel Mixx 2” is a trickier prospect. Unfortunately, Christian rap often means Christian first and rap second, which can make for pretty mediocre music for anyone not in the mood for a Sunday school lecture. There’s nothing worse than a bad rapper, especially when he’s telling you how you should be living.

“Dat’s Gospel Mixx 2” avoids this trap by giving equal weight to both the music and the message. It’s basically Christian street rap, performed by people with actual skills, and backed by solid beats. It starts off with the synth bombast of “Can’t Hear Y’all,” with Brinson, Big R., and Readywriter criticizing other rappers for not having any content in their rhymes. Even if you don’t agree with their evangelizing, it’s hard to argue with them that hip hop is too full of materialism and violence.

“Labor Lawz” is the best track on the album, with a dirty, funky break courtesy of Redd Lettaz and some solid rhyming by Readywriter, Omotayo, and Big R. Readywriter is the best rapper in the Godchaserz crew. He shines on every track he’s on, and kills it on the acappella freestyle “4 Christ,” rapping for two and half minutes solid with no beat. He adapts Godchaserz religious message to hip hop, and his proselytizing doesn’t sound too different than any other rapper who points out the inequities of life and encourages listeners to follow a more positive path.

Knine’s “The Best” is typical hip hop braggadocio in which the rapper boasts about being the best, and alludes to a life of crime and drugs before he started getting high off Christ. It’s one of several tracks on the album by rappers who came from the streets before finding God. It allows for gritty content without glorifying violence or crime, and adds authenticity to the project. This ain’t a bunch of Sunday school teachers trying to rhyme.

“Gospel Throwback 2” is basically a club track where Excelsius, DJ 1-God, and Readywriter rap about God rather than getting drunk and rubbing up on hotties.  It doesn’t sound like what you’d think a Christian rap song would sound like, as Excelsius points out:

“Man, hold up, I got Christ banging loud in the trunk
And when I turn it up they be like, ‘yo, that can’t be Christian!’
I turn it up loud and say ‘shh just listen'”

Alright, so maybe that won’t win the Nasir Jones Award for Lyricism in Hip Hop, but it gets the point across. The genius of “Dat’s Gospel Mixx 2” is that it’s in a genre that is not known for lyrical depth. If this was a typical street rap album, the songs would all be about crisp white t’s, candy paint, getting tore up in the club, and maybe pushing weight. Godchaserz takes the no-frills model of street rap and adds some substance to it, making their message more palatable and more powerful. It’s refreshing that they are rapping about something besides the same ol’ same ol,’ and more often than not they do it with finesse.

Not every rapper here is stellar, but they are outnumbered by rappers who can actually rap. There are definitely some songs here that should have stayed on the cutting-room floor, but that’s true with any compilation. What’s important is that there are enough solid tracks to make this worth the sticker price. “Dat’s Gospel Mixx 2” is a must for fans of Christian rap, and even a non-believer like myself is going to keep “Labor Lawz,” “4 Christ,” and “The Best” on rotation.