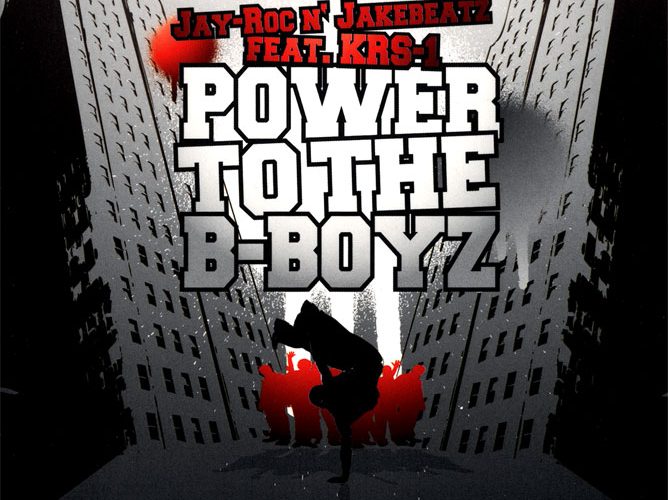 Self-proclaimed B-Boy Hustler Jay-Roc is at it again with “Power to the B-Boyz,” the follow up to 2007’s “The B-Boy Hustle” album. Musical collaborator Jakebeatz now officially shares the billing, and together they continue to campaign for b-boys everywhere. The album starts with a bang as no other than KRS-One provides the vocals to the title track. The rapper who once made an instrumental album called “Strickly For Da Breakdancers & Emceez” brings breaking and emceeing together once more with a staccato of rhymes that pay tribute to breaking:

“B-boys breakin’, b-girls they breakin’
Never that fakin’, don’t get it mistaken
Peace, love, unity, no time for hatin’
No debatin’, we gets the top-ratin’
Here’s what I’m statin’, here’s what I’m makin’
for those that be breakin’ – keep on creatin’
keep shakin’ and bakin’ dudes that be fakin’
keep makin’ that cake, rock this till you’re achin'”

Jay-Roc drops a few lines as well, but it’s Jakebeatz who provides the b-boys (b-girls are henceforth implied) with the essentials in the form of a loudly stomping, energetic and anthemic beat. Hard, clear drums are a trademark of the album. On “One, Two” they set the pace for the sparse, dark keys and sampled vocals from Ice-T’s “I’m Your Pusher” (“Pump up the volume,” I’m on the dancefloor” etc.). Yet true to the album’s spirit, the drum programming often undergoes changes you don’t hear on average dance productions. Like several tracks here, “Rare Funk” owes to funk-infused house Ã  la Armand Van Helden, but the rhythm is choppy enough to present a challenge to ordinary party people looking to get down to it. “Stop Frontin'” is traditional b-boy funk but uses a production technique of layering that is diametrically opposed to today’s minimalist hip-hop dance tracks.

That’s not to say that “Power to the B-Boyz” is meant for an exclusive circle, in fact, its appeal lies even somewhat beyond the hip-hop realm. Two vocal tracks are essentially pop. “Never Let Me Down” has definite dancefloor potential with Max Urban crooning clever lyrics that describe both a romantic relationship as well as the dependency between dancer and musician. “Don’t Lose Your Grip” is a slick mixture of electro, funk and pop with singer [kei] offering able assistance to Jay-Roc’s modern age b-boy document with its message to keep the passion alive and to stay true to the game. Once again Jay proves himself to be a very outspoken ambassador of b-boying:

“On my way like it just begun
Miss the old days when I did it for fun
when I stepped in this world in my b-boy shoes
learned the b-boy moves and the b-boy rules
Yeah, this is how it all started back then
Still rockin’ on these beats, now I’m rappin’
Stop the fake shit and keep your hands clappin’
(…)
The gangster era is over now
Real hip-hop takin’ over now
Time to make way for the b-boys
replacin’ all the pushers and the d-boys
Hip-Hop’s competitive, not negative
you decide which side you’re rockin’ with”

Evidently, Jay-Roc also addresses hip-hop as a whole here. While his position may seem dogmatic and echo old fashioned sentiments about ‘real’ hip-hop (he goes as far as calling b-boying “the realest form of hip-hop”), there’s no denying that pushing your point with verve and vehemence indeed is hip-hop. Why expect any different from an album called “Power to the B-Boyz”? From Jay-Roc’s perspective, he is in a position to make demands, even if it’s just expecting a beat to serve his specific needs, as stated on “I Don’t”: “See I’m a b-boy, I don’t rock if the beat ain’t dope.” Jakebeatz tries his best to comply with beat breaks and a “Son of Shaft” sample, but like so many tracks here the true test awaits on the linoleum (or whatever surface b-boys prefer these days).

Still, many tracks should be enjoyable for the average hip-hop head, such as “Makes You Wonna” with its gripping strings and a half-minute rap samples finale, or the electro throwback “Showdown” (with nods to the hip-hop classic “One For the Treble (Fresh)”). Sometimes a critic’s job is to be pedantic, so my advice to Jakebeatz would have been to extend the Edo.G quote (in “Runnin’ This House”) for logical purpose to “[C]laim they runnin’ this house / they just runnin’ they mouth.” Also, two remixes that offer nothing particularly new and the recycling of the KRS vocals for “The Movement” may not be unusual for a dance release, but they don’t exactly add value.

It’s debatable whether “Power to the B-Boyz” is strictly for the breakdancers or not. Considering the many people around the globe who dance ‘hip-hop’ in some form or fashion, it easily aims beyond that target audience. As mentioned, it contains a couple of potential breakout hits (no pun intended) that might even chart in some regions. It also has instrumentals that seem to be made for athletic dancing. Which, let’s be real, isn’t a pasttime for everybody when dancing alone is beyond the capability of many. But there are also tracks that are hip-hop to the bone, the prime example being “Ruff’n’X Anthem,” the definite introduction to Jay-Roc’s crew Ruff’n’X (pronounced ‘Ruffnecks’), where like a true master of ceremony he presents each member before the track ends on a wistful note with “All for one, one for all / together we stand, together we fall.” When you hear Jay rap, “Ben X is freezin’ in your face / as a lawyer snatchin’ your case,” it becomes clear that whatever path you may choose later on in life, you can be a b-boy for life.