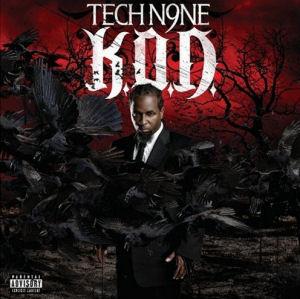 Tech N9ne’s latest album was shrouded with controversy and hype from the minute it was announced. The title was first announced as “K.O.D.” with no information on what the letters stood for. It was rumored to be Tech N9ne’s return to the darker sound which made him popular. If that were true, it would be a sharp departure from the image Tech N9ne has spent years building. After receiving backlash from his hometown fans, Tech N9ne made it a point to show that he was not the devil worshipping horrorcore rapper they stereotyped him to be. He signed Kansas City street rappers to his label and shifted his focus to making music that was more commercial and universal. While some fans balked at the change in direction, it has worked wonders for Tech N9ne and his Strange Music label. His albums are still injected with the same dark paranoia that made him famous, but it is layered with a smoother sound and party anthems galore. The result has been plenty of sales and success for the independent rapper. With such a successful formula, one wonders why Tech N9ne would choose to veer from it at this point. The answer is found in the music itself.

The album’s first song answers those questions very clearly. “Show Me A God” is a song so meaningful to Tech N9ne that he had to put it before the introduction to his new album:

“Ey, my momma, my momma, my momma is so tormented
She been through trauma, mo’ drama, the dawn is gone, it’s more tinted
On this side, it gets out of it
How does a prophet who love God as his father
slippin to get the bottomness out of it?
How come an angel gotta be sick in the pancreas?
Like she an atheist, maybe it’s the faith that is makin
this lady as crazy and has made me this, SCEPTIC!
Next threat is lupis on top of epileptic! Never rested!
Psychiatrist forever tested, Reverend blessed it
Brethren, heaven, Tech is begging for effin’ X-Mas
Hopin momma ain’t left an exit
It better get better quick, how you let her get sick with bread invested?
In the church every Sunday, I’ve been searchin for one way
Or another, you’re gonna have to curse me or burst me with a sun ray
To let me know that you’re coming or en route
I’m ’bout ninety-nine, but I need a hundred percent proof!”

The message on the song is clear, Tech N9ne is going through some deeply personal problems that are making him seriously question his belief in God. It’s quite a juxtaposition with the darkness that envelopes Tech N9ne for the remainder of the album, but serves as a way to keep the album’s dark tones rooted in reality.

In fact, with the exception of the middle of the album, a section Tech N9ne entitles “Madness,” most of K.O.D. is very much grounded in reality. “Demons” and “Blackened The Sun” serve as metaphors for Tech N9ne’s frustrations. The last part of the album, entitled “The Hole,” contains perhaps some of Tech N9ne’s deepest songs in years. “Shadows On The Road” does a excellent job of capturing Tech N9ne’s paranoid thought process. “Leave Me Alone” reflects Tech N9ne’s constant turmoil over his music and the multiple directions his fans try to pull him in:

“The hood don’t play me huh?
Treat my Strange Music like rabies, huh?
They be sayin Tech Nina, he crazy huh?
But you want me on your video and CD
You elementary rappers are straight remedial – A.D.D.
I’m in my own world partna, and you don’t fit there
All your Tech hatred has got you soundin like a bitch, playa
And this is to multiple haters and I swear it
Ain’t about a pass homie, but if the shoe fit wear it nigga!
It’s a size N9ne, wanna step inside mine?
It’ll feel like you died tryin and you will know that I can’t buy time
for you to catch Casper it’s high time
You tried crimes against me cause you couldn’t follow the guidelines
They say respect yo’ elders!
You best go tell the Lord forgive you ’cause what’s next – your failure!
Just leave me where it’s less your hell, brah
Invest your mail to somethin that sell
’cause the Tech don’t smell ya, Tech gon’ tell ya…”

Outside of the “Madness” section, when Tech lets the darkest reaches of his imagination take over, “K.O.D.” is a personal and emotional record. Even the “Madness” section is worth listening as “Horns” and “It Was An Accident” balance out the extreme story telling found on “In The Trunk” and “Pinocchiho.”

“King Of Darkness” is Tech N9ne’s best album in years. That is not to say Tech N9ne has been dropping any bad albums. “Everready” and “Killer” are both great albums, but “King Of Darkness” is a return to his roots. The darker tone to the album is balanced well by the upbeat music and heartfelt emotion. The album isn’t without one or two party anthems, but the highlights come when Tech lets his darker instincts take over. Fans shouldn’t expect this type of album from Tech N9ne every time, nor should they want this type of album from Tech too often. “K.O.D.” is an album born out of the kind of pain and frustration you wouldn’t want to wish upon anyone, but the result is music which captures the type of dark honesty not often found on record.