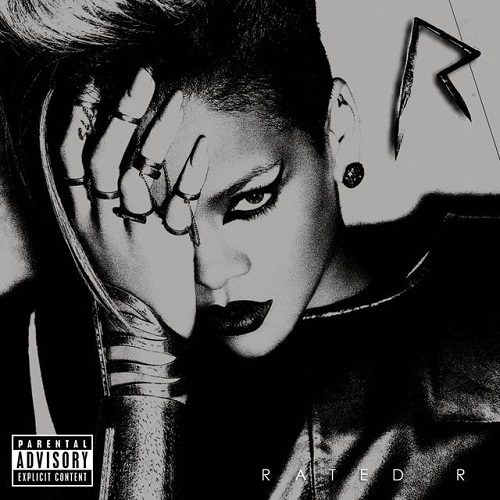 “Ladies and gentlemen, to those among you who are easily frightened, we suggest you turn away now. To those of you that think they can take it, we say “Welcome to the Mad House!'”

That’s what the intro says, and believe you me, it is true. Here it is, “Rated R” Rihanna’s own “mini-movie.” After what must have seemed an eternity wrapped up in a mere nine months, Rihanna finally gets to return to her primary focus of actually releasing an album (fourth in five years, since you ask) and here we have one more in line with hip hop than R&B or Pop, hence its unusual appearance on this site. Take one somewhat cinematic introduction, lashings of edgy production that sounds banging in your car, lyrics that occasionally approach rap-style levels of complexity and, above all, utilising the public/private clay of her own life. Since pretty much everyone reading this will probably be entirely aware of every aspect of her altercation with then-boyfriend Chris Brown, and the subsequent abuse she suffered, there is no real need to go into the issue with any degree of complexity just know that it obviously provides the framework needed in order to judge many of the merits of “Rated R.”

What we have here is a dense album that needs multiple listens, almost the polar opposite of what would have been originally expected of a Rihanna LP if this had been released a year ago. RR is, for the most part, a muscle flex of stunning lyricism, more akin to hip hop than any other genre (there are even a few mentions of “bitch” and “nigga” even a “fuck”). As close to a concept album as someone of her stature would be comfortably allowed to release, there is a surprising lack of “club” singles; even if on paper, “Good Girl Gone Bad” didn’t have that many, it felt like a lot more than this. There are liberal doses of sort-of-challenging production (“Wait Your Turn”), combined with cheesy pop (“Te Amo”). The provocative artwork is incredible, the videos gritty and eerie. In one way, it is heartbreakingly sad that a girl so young has essentially had her innocence ripped out, but with pain comes focus, so now the ambition is clear: Rihanna is entering “icon” territory.

“Rated R” aims to tell a story, admittedly one that we join halfway. It kicks off with the daring come-hither of the aforementioned “Mad House” introduction, a siren call to thems that loves the darker side of the night. The riotous “Wait Your Turn” launches: a bone-crunching the-bridge-is-over M.I.A. style of sneeringly playful synths (surprisingly produced by Stargate), where she taunts “I’m such a fucking lady!” This is followed by second single “Hard” featuring Young Jeezy â€“ very solid and catchy, it is a triumphant Jackson Five anthem, albeit one with a limited scope on the dancefloor (it needed to be 5bpm or so quicker), and Jeezy’s verse is characteristically strong. Somewhat abruptly, “Stupid In Love” comes along, an averagely produced but lyrically cracking ballad, a very real anthem that many would easily identify with. “Rockstar 101” (a song that sounds superb in a late-night driving scenario) is a reckless ride in the VIP section of the club, a subtle contribution from Slash contrasting with completely over the top production, and RiRi declaring that she “never played the victim, always play the stalker.” To her credit, you rarely find her “milking” the situation, and she has come across as angry, yes, but always dignified with it. The criminally underrated first single, “Russian Roulette,” is a classy, histrionic and haunting mid-tempo act of defiance, complete with superb vocal production and an enigmatic video. Did the world really expect her to come out with a feel-good club anthem BEFORE this song?

“Fire Bomb” is a strange and interesting one, conflicting production acting as the foundation for lyrics that sound like a hot sixteen. If there is a “traditional” Rihanna sound, this is the closest thing to it on RR. One of the clunkier moments arrives with “Rude Boy” if Rihanna has come across as a little sister, this is her tale of ill-advised rebound sex that, rest assured, none of us really want to hear. Whilst not quite as uncomfortable as listening to Jay-Z and Beyonce have their weird brand of robot sex, the ironic “love me love me” pleas at the end don’t really alter the feel of the track. “Photographs” is a decent will.i.am number with a sparse 1980’s feel to it, complete with a funky switch up. “G4L” â€“ which means “Gangsta For Life” is her strange revenge fantasy about, presumably, gunning the shit out of Chris Brown and licking the gun afterwards, because revenge tastes sweet. Produced by UK duo Chase & Status, the track is intriguing enough but doesn’t completely fire on all cylinders. After such a hard number, the incredibly cheesy “Te Amo” to all intents and purposes “Miss Independent” with a cynical Latin twist â€“ seems unnecessary, a Nelly Furtado “Mi Plan” throwaway. Better is the Justin Timberlake contribution, “Cold Case Love,” which is the true end of the album, with understated (if not melodic) instrumentation giving rise to an aurally pleasing closer. The actual curtain call is “The Last Song,” a slightly pointless, melodramatic end-credits number that serves no real purpose.

It should be noted that her singing has significantly improved and, in line with Rihanna’s icy and empowered exterior, she doesn’t overplay the Chris Brown hand, so thankfully “Rated R” isn’t an emotionally cloying record. Nor is it an album jam-packed with mega-singles and her ambition deserves applause but it still doesn’t fully commit to being a “concept” LP, ending up as somewhat of a halfway house. So yes, “Rated R” aims to tell the story of Rihanna, yet, most obviously, it is hampered by some inexplicable sequencing decisions that do not always help proceedings. Whilst “Good Girl Gone Bad” had an insatiable appetite for melody, this is more about mood/lyrics, and it is an undeniable success on those terms. However, it is very dense and maybe needed more melodies to help digest it all. Adding to that, the production at times lets her down, ranging from excellent to average, with a couple of songs that could well have worked better as skits. So, whilst “Rated R” is a display of strength, one can’t help but feel that it is a missed opportunityâ€¦ A bit more care and attention could have turned what is, essentially, a made-for-TV special into her “mini-movie.” You’d still watch it, though.