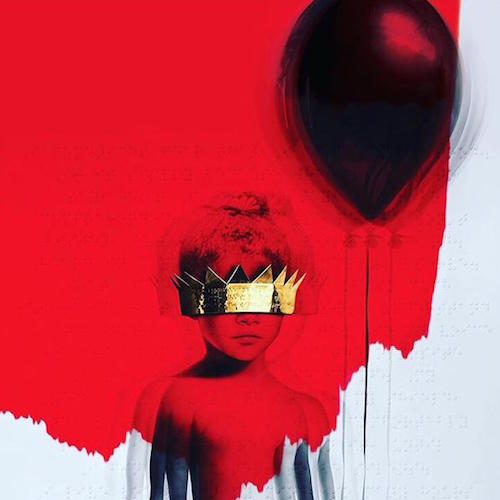 “ANTI” is such a beautifully simple title for an album where Rihanna finally pushes back and fights for the opportunity to control her own destiny. After seven albums in more or less the same number of years, you had a twenty-four year old woman who just needed a bloody break; a chance to be/find herself; relax and explore the world without touring it; relieved of the constant pressure to perform/create and turn it on at a moment’s notice. Well, notice the absence of Def Jam in the top line of this review – she signed with Roc Nation management, yes, but Westbury Road is her shit. She owns the masters to “ANTI” – and even temporarily gave away this stellar album for free. This is a different Rihanna, and it’s an LP that hints at a potential growth and responsibility she is clearly keen on showcasing.

Everything is there in the opener “Consideration” – you’ve got the classic Navy Commander seemingly talking to her former record company, lambasting them for refusing to let her do things her own way, and potentially taking shots at her “dead ringers” (as M.I.A. would say). But this time, there’s a sample (think the intro to Common’s “Be”); there’s even a guest (SZA) doing a post-chorus breakdown. It’s one of the best tracks that Rihanna has ever recorded, a clear step up from her last album (“Unapologetic”), and that’s a phrase that will be repeated throughout the course of “ANTI.” After the clever but self-explanatory “James Joint” skit comes the phenomenal throwback to the power anthems of the 1980s: “Kiss It Better” is impossible to dislodge from the brain, potentially even more so than the first single “Work” featuring Drake.

That slice of ragga/bashment (as we say on our side of the pond) is a weird kind of 90s throwback to the shit we grew up on – it may not have the analogue recording rawness and bruck rowdiness, but as a slow burner, it most definitely hits the spot, with plenty of hidden gems in the lyrics. I can’t really see it being huge in America (as I’ve said before, the connection between London and the Caribbean is eternal so we instantly GET it, it’s just part of the city, and maybe the size of America makes it more disparate and lowkey over there).

What does suit wider America’s history is “Desperado” – for full disclosure, the film was one of my favorites growing up (had poster on wall, grew hair to look like Antonio Banderas in order to attract a Salma Hayek type figure etc). The song works well as a cinematic vignette, even if it doesn’t seem to have much of a purpose – but it certainly could give great video. For all of the genius that “Bitch Better Have My Money” showed in that daring clip, the song itself sunk with barely a trace. Like that weed smoke, the songs on “ANTI” linger in the air far longer, with another example being “Woo” – a track with a beat harder than 99% of rappers currently plying their trade (Hit-Boy and Travis Scott deliver).

“Needed Me” is a gorgeous cut, with DJ Mustard showing impressive diversity; “Yeah, I Said It” finds Timbaland successfully harking back to those Aaliyah days. The immediately attention-grabbing cut is the lifting of my favorite Tame Impala tune for “Same Ol’ Mistakes” – the result is stunning, and the Aussie band apparently approve. It’s musically trippy, finds Rihanna arguing with herself and is a six-minute epic – you wouldn’t have gotten this with Def Jam RiRi, that’s for sure. “Never Ending” is, perhaps, a potential weak moment – sampling Dido’s “Thank You” worked for Eminem, but while this has a timeless quality, it doesn’t necessarily fit “ANTI” and maybe should have been a deluxe option. “Love On The Brain” is unbelievable – you’ll simply be shocked that it’s actually Rihanna’s name attached, and it could well be a gigantic single with the right wind behind it. “Higher” already seems like a two-minute fan favorite, with it’s cheeky lyrics and soaring melodies. And “Close To You” is a subtle way to end, linking the old Robyn (“Stay”) with the new Miss Fenty. This is a total reinvention, make no mistake.

I remember reading an article a while ago… It was about the process behind the songwriting camp for “Man Down” (plus the “Loud” sessions) and had various estimates on how much the entire process cost – before Rihanna even stepped inside the booth. And I reckon that stung Rihanna a bit, once she took a step back. It definitely feels like Rihanna is having more input into the music: be it the lyrics or direction, her fingerprint is all over “ANTI” in a way that (ironically) Nicki Minaj’s wasn’t on “The Pinkprint.” It may be down to that feeling of ownership, taking the bull by the horns and being brave enough to say: “No, I got this.” And believe me, if you’re an album lover, then Rihanna delivers the best LP of her career. It’s not chock full of huge singles; it takes risks and may well alienate the more casual element of her fanbase, but really they should have grown up with her over the last decade (otherwise newbies should stick to “Good Girl Gone Bad” and “Loud”). The comparisons between Beyonce and Rihanna are pointless – they are completely different artists, let alone people. Bey is impressively controlled in everything she does, but Rihanna has always had a lovely looseness to her career. Yet, the ownership they both crave hints at a potential convergence in their respective ideologies: black female empowerment. It’s a whole new world for Rihanna, and the possibilities are endless.