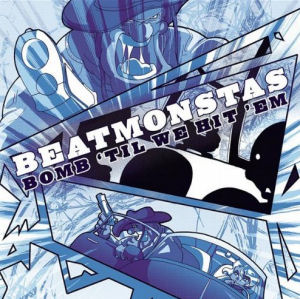 BeatMonstas :: Bomb ‘Til We Hit ‘Em

For a group that prides itself upon being “monsters with beats and rhymes”, it only seems apropos to dub yourselves as the BeatMonstas. The Chicago-based act joined forces in 2003 and released their first album, “The 3rd Weapon” in 2005. The reviewer of that album made it a point to mention that the BeatMonstas are at their best when diving head first into the murky waters of social and political issues. Upon reading that and the press mailer that pointed out the fact that most of their latest album, “Bomb ‘Til We Hit ‘Em, was recorded during the later years of the Bush Administration, made me think that every song was going to be a “Fuck George Bush” rally cry. To my surprise, they really aren’t. Granted there are a few jabbing statements here and there thrown at the former Administration, but the lyrics are more or less a representation of how ordinary people are forced to deal with the effects of the decisions made by said Administration.

The album opens with “Beats N Rhymes” and “Easier Said Than Done”. The former cuts right to the center of the issue within the first bar of lyrics: “Warfare, welfare, gas hikes, high bus fare, life ain’t fair…school shootouts and food scarce”. The Mistaloo Mef produced latter track, is hard hitting but still has a jazzy feel to it and is quite audibly pleasing. It’s easily one of the album’s standout tracks.

The Dig-Dug produced title track showcases low piano notes, a snare drum, and progressive synths that remind me of David Bowie’s “Fame”. By the time “Can’t Fool Me Now” rolls around, I was looking for more denouncement of the ills of society. This track did more than enough to provide just that. Taking aim at everything from the former POTUS to offshore outsourcing to the greed of the oil industry. No one was spared the wrath. By this point, I’d become more aware of a few things: the BeatMonstas know how to pick beats that compliment their flows and also that they truly understand the plight of many working (and many more wish-they-were working) families in the world just trying to get by.

The same formula is in place for “Turn It Up” and “Sea To Shining Sea”. However, the production switches up just a bit so that it remains a bit fresh to the listener. “Turn” is a more uptempo track, while “Sea” is rather slow and mellow in comparison, and isn’t as aggressive. Prince Po of Organized Konfusion fame makes a guest appearance on “Rippin To The Last Bar” and proudly proclaims “Fuck a connect! Fuck a gimmick! Fuck a fake image!”

It’s not ALL hostility ALL the time with the BeatMonstas though, as they find the time to address the ladies a bit on songs like “Unfair” and the A Tribe Called Quest interpolating, “Sexy Mama”. I think that Q-Tip would appreciate the way “Sucka Nigga” was flipped to create the hook. These songs aren’t corny at all, but they don’t really fit in with the rest of the album. I supposed even the angriest of Monstas needs a little TLC every now and then.

After a brief instrumental, things close out with “People’s Champion” and “All Aboard”. The former is all about the City of Wind and the BeatMonstas love and appreciation for the rich tradition that it holds. The Phashara beat makes it another standout track on the album. As this LP ended, I realized that the album didn’t have to go to the point of “Dubya was the worst President…ever!” to have a meaningful message. In fact, the “this is what happened to us because of…” approach seems to work better. It doesn’t come off as preachy as some others who choose to rhyme about the same subjects. In the end, I think the BeatMonstas can call off the bombing, as they’ve certainly hit their mark with this release.