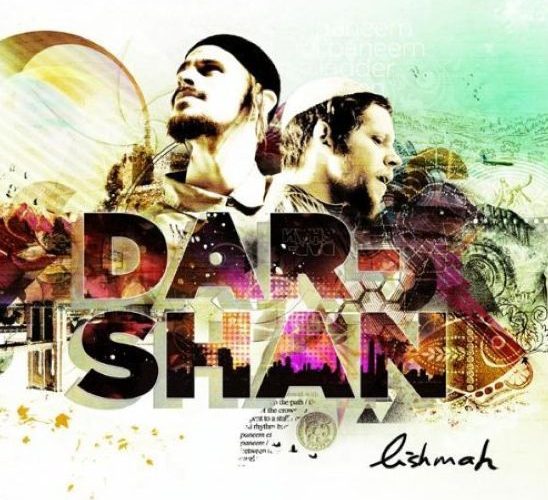 “I don’t know, how I know, what I know
But I know that it’s alriiiiiiiight”

So sayeth the hebrew hip-hop group of Eprhyme and Shir Yaakov on the song “Why Wait” from their debut “Lishmah” EP. This writer must confess to not really knowing much of the Jewish faith other than how it is portrayed in popular culture and having done a little reading on Wikipedia about what is and isn’t considered “kosher” – and of course who knows if ANYTHING you read on Wikipedia is really accurate anyway. As a result I can’t put the statement in his press release that Darshan is “astral rap, liturgical jazz, audio alchemy” who is “Harmonizing Hebrew chant with hip-hop, folk rock with electro-pop, love poetry with kabbalistic psychology” to any test of truthfulness. It is also claimed that Darshan is “a unique and organic weave of world wisdom traditions and modern musical styles” and this one I can actually attest to. The kind of chanting you hear on “Yotzer Or” sounds like what you’d hear from any world music CD you might pick up with a bottle of Frappucino at Starbucks, as opposed to any sort of hardcore hip-hop. On “For the Sake of the Unification” the group does offer some clarification:

“We receive Torah when we all unify
Put down your pride, all differences aside
Something so much deeper than the fences that we build
In the holiest of holies you can see the sound still
With one voice, we made the choice free will
to accept the yoke of heaven amidst hope to fulfill”

This much I can glean about Darshan from this short five track EP – they are sincere and devout practitioners of the faith who believe that the world can be brought together with a hip-hop take on Hebrew faith. Unfortunately this doesn’t translate quite as well as Matisyahu did, who meshed the seemingly incompatible traditions of Jamaica and Israel into a stylee with his faith that’s now called American Haisidic Jewish reggae. No joke – that’s the term – and he’s practically the only artist of note of this tradition, a genre of precisely one. The same can’t be said of Darshan though, because there have been hip-hop artists of Jewish background for decades from diverse backgrounds, though the most notable may be New Yorkers like the Beastie Boys and MC Serch. Funny thing though – none of them were chanting holy scripture on their albums or trying to match it to hip-hop beats. Whatever their faith was privately, on wax they were simply musicians looking for a perfect sound to bust clever lyrics to, so unless you knew their biographies you would never know their religious pedigree. With Darshan it’s entirely the other way around, which I completely respect as I do all people their faith (to each their own in this wide world) but I can’t say it makes for great music. This is the same complaint so many people have with Christian rap – the message of faith and devotion gets in the way of making a good song. I’m sure to the devout Darshan will be the greatest thing since sliced matza but for me the beats save “Ashan” and “Why Wait” leave me flat. Pass the Manischewitz.

PS: Commonly understood as meaning “for it’s own sake”, the term lishmah is usually applied to the proper state of mind for Torah study. Thanks Darshan – I learned something new today.

PPS: I know Adam Yauch b/k/a MCA long since converted to Buddhism, so please don’t write in to complain. He’s a famous FORMER practicioner of the Jewish faith.