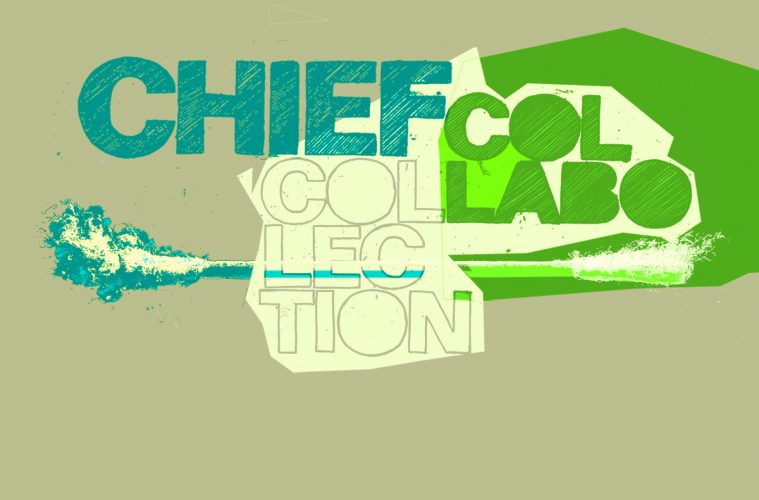 Chief. No Xcel, no Kamachi, no Chinchilla, just Chief. The 28-year-old beatmaker, a native of Lausanne, Switzerland, has weaved a web of connections that took his music well beyond the shores of the Lake of Geneva. Running a studio and a label under the name of Feelin’Music with fellow producer No Games since 2005, he branched out of the home market with extended collaborations with Brooklyn-based rapper Sene and Maryland’s Kaydee and even wound up releasing a full-lengthby Canadian independent spirit Moka Only. Now he serves up a compilation of his works entitled “Collabo Collection.”

In somewhat of a broad generalization, one could say that Chief makes music that isn’t substantially different from the days when hip-hop and jazz first collided. Yes, the sound has gone through various stages, but the blueprint remains – soft but straightforward drums, full bass, typical jazz instruments doing vaguely jazz things. Various producers have mastered the sound at some point or another (DJ Spinna, DJ Hi-Tek, J. Dilla, J. Rawls), and Chief masters it as well.

Some tracks are therefore reminiscent of existing templates. “True Love” with Sene and Blu is top to bottom Slum Village school of rap. “Hello” with singer Just Brea (and a rap cameeo from Ab Rude) dwells on the lighter side of the Soulquarians sound. Others are just generally in the jazzy mold. The Moka Only-featuring “Felt Before” opens with a pensive bass before extending to guitar twangs, piano twinkles and drums locking in with laid-back precision. “Love Lost” is a sensual shower of melodic drops of horns, guitars and vocals, perfectly capturing Co$$’ thoughtful reflections on relationships. The rapper with the equally unwieldy alias Ca$hUSKing and cool West Coast accent returns for “Soul Brother,” a floating track whose melodic components virtually beam from high above.

One of the highlights is “Jazz Unconditional,” where John Robinson gets to express his worship of jazz once more after the Jay Are (J. Rawls & John Robinson) collabo album “The 1960s Jazz Revolution Again.” Using the type of David Axelrod drums the Diggin’ In The Crates producers once adopted from jazz, as well as an arrangement of soft bass, piano, flute and vocals, Chief creates a track that is truly immersed in jazz as the raps follow suit: “I wrote this one ‘Round Midnight listenin’ to Dexter / Gordon on melodic textures (…) Mr. Shepp felt the Blues for Attica / where the passion for the music shined a deep pride for Africa / the mother of civilization itself / Such a awkward synchronization is felt / it’s so Thelonious.”

Despite the best of intentions, jazz-influenced hip-hop has always been just that. That’s the case with “Collabo Collection” as well. To Chief’s credit, the mood of his music is most definitely jazzy, and in some ways even the structure. A lot of things happen during his tracks, creating an ever-changing soundscape. The instruments don’t enter into dialogue like in real jazz, but it’s still unusual for the often monotone and minimalist genre of hip-hop.

What’s largely absent from Chief’s beats is the element of defamiliarization, in Wikipedia’s words‘the artistic technique of forcing the audience to see common things in an unfamiliar or strange way, in order to enhance perception of the familiar’ and ‘a central concept of 20th century art.’Defamiliarization has always been one of hip-hop’s strengths, and the lack thereof tends to minimize the artistic value, particularly as it pertains to straight jacks of pop tunes. Chief is far from committing the latter, but overall his beats still end up sounding all too familiar. His collaborations with singers are no exception. “Once in My Life” with Les Nubians are 5 minutes as uneventful as possible and “Demon Love” with Kissey Asplund goes in a somber direction, but is still ultimate proof that Chief’s music knows no dark side.

Regarding the rap content, “Collabo Collection” doesn’t exactly put itself out there either. Kenn Starr shines alongside Lone Catalyst J. Sands on “That’s How We Kick It” over a Blaxploitation-infused beat with brass and bubbling bass. Dynas, fresh off his promising “The Apartment” album, doesn’t really step out of the perpetual chill-out zone with “D&C.” Hempstead duo Tha Connection provide a more wholesome experience with “Let it Be,” which is just as much Chief’s doing as he laces them with a classic traveling beat, a very finely tuned slow burner with a light piano rising above delicate scratches. The most traditional hip-hop song comes courtesy of London group Sunken Heads, who see hip-hop as both a ticket to see the world and a voyager that travels the globe in “The Journey.” Take a well-chosen Nas quote, accomodating pianos and purposeful raps, and you’ve got a winner:

“I’m ’bout to hit a record spot to buy myself a vacation
12 quid’s all I need to reach the next nation
From men in Penn Station tellin’ tales of crack basin’
to fat basslines ravin’ on beaches with the Bajans
crate-diggin’ deep in Tokyo with Asians
[…]
Hip-Hop’s on a journey, been through many ghettos
from the manors around London to the slums up in Soweto
[…]
I praise hip-hop for gettin’ me from A to B
the people that I’ve met and all the places that it’s taken me”

If good hip-hop is a mixture of creativity and competence, “Collabo Collection” certainly delivers with competent beats that possess a touch of jazz and plenty of class. Put together between 2005 to 2009, the 19 tracks on this album (incl. four instrumentals) are proof that Chief is completely at home in his niche. His creativity, however, is too small-scale to ascend to the originality that is so prized in hip-hop AND jazz.