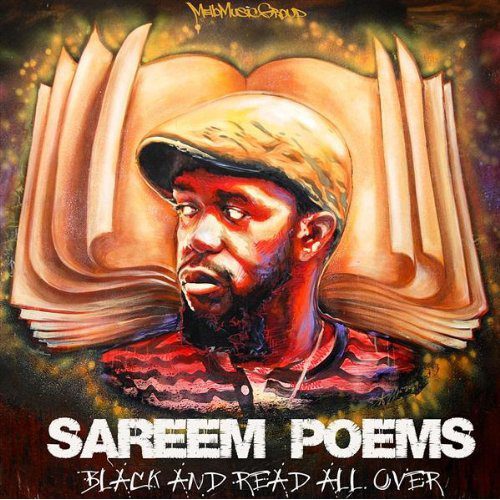 Sareem Poems :: Black and Read All Over Deluxe Edition

Sareem Poems may be from the LBC, but that’s all he’s got to do with Snoop Dogg. He doesn’t smoke weed, doesn’t get drunk, doesn’t party, doesn’t own a gun, and has never been in a gang. Snoop’s probably confused at the “doesn’t smoke weed” part. Do you mean he only eats it? No, Sareem makes it clear that he doesn’t do that either on “Impossible”: “I don’t get weeded/Don’t want it, don’t need it, and I don’t eat it.” Sure, there are a lot of MCs who are (rightfully) against gun violence, but smoking pot? The only other one I can think of is Dr. Dre, who infamously declared he didn’t “smoke weed or cess” on 1988’s “Express Yourself,” a mere three years before he made an album named after weed and modeled after a package of zig zags.

I’m probably harping on the pot thing too much. It’s just one element of “Black and Read All Over,” and a small part of Sareem’s overall picture. It’s not like he’s just being square, either. As Sareem explains on “See It,” he came about his abstinence the hard way, through growing up with a drug-addicted mother and experimenting with drugs himself:

“Detached and on track
Been to hell and back
Right below the heavens
Is where you find me at
[..]
From lost innocence at age 13
Began experimenting with sex and weed
Drugs and lust were seen
Momma showed me daily
Born ten years later
Would have been a crack baby
Survived the 80s
Found the God that made me”

So Sareem Poems is not your typical rapper. While others in hip hop celebrate sinning, he raps about living righteously. You could almost call him a Christian rapper, given that he is Christian and a rapper, but that seems like too constraining a label, especially since “Christian rap” isn’t exactly a quality cue. You could call him a conscious rapper, and that description fits better. However, he doesn’t sound like a conscious rapper, or at least the mellow, bohemian variety. They all smoke pot, anyways. Sareem has a authoritative, commanding flow that is one part preacher, one part Chuck D., and one part Black Thought. It gives his rhyming a gravitas and a sense of anger. Even when he is rapping about love or other positive things, he still sounds slightly ticked off.

He’s gone by Sharlock Poems performing with the LA Symphony (the rap group, not the orchestra group), and he released an album as Poems in 2008 on the Hip Hop Is Music label. “Black and Read All Over” originally came out in July of 2009, but it is being rereleased as a digital “Deluxe Addition” with instrumental versions of the songs and a handful of remixes.

Poems is a passionate, fierce rapper. He raps about things that are important to him, and does it in a commanding, uncompromising style. While he does sometimes show a lighter side, he doesn’t really crack jokes, and he doesn’t mess around. There’s a trade off with this. One one hand, it’s nice to hear a rapper addressing serious issues and taking a strong moral stance. However, Sareem sometimes comes off like a stern father upset with his son for hanging out with the wrong crowd. Just as your dad had reason for hating your stoner buddies, Poems has reason to be upset with a lot of things in his community. Still, there are times on the album when Sareem’s raps feel uncomfortably like lectures. And this from someone who doesn’t smoke pot and is generally in line with Poems’ opinions. His style is equally unrelenting, and begins to feel limited in the course of the fourteen tracks.

Most of the production is handled by Theory Hazit, who offers vibrant beats that jump out of the speakers. Hazit is clearly not a fan of the “less is more” philosophy, and crams sounds together. “Come Get It,” mixes ringing bells, a spaghetti western whistle, and a chugging beat; “Hard Labor” layers wailing ograns over booming drums with some background noise for good measure;  and “Shake It Up” works a loop for all it’s worth. Done well, Hazit’s beats are energized, exciting, and loud. Hazit can also veer into noisy and cacophonous, and he doesn’t always find harmony in the different samples and sounds he mashes together.

Hazit’s work is contrasted with a few tracks produced by Oddisee, the D.C. beatsmith who worked on this year’s excellent Diamond District album. Oddisee’s beats are more soulful and restrained than Hazit’s, and he demonstrates the value of a few carefully placed samples on “She’s So So.” His tracks provide a nice foil to Hazit’s beats, and showcase why Oddisee is one of the best producers of the year.

The remixes offer variations on the songs rather than radical reworkings. They are a nice bonus, as are the instrumentals, but don’t warrant another purchase for those who already own a copy of “Black and Read.” The real audience for this album are fans of conscious rap music that slept on the disc’s July release. Sareem Poems offers his take on positive Southern Californian hip hop, and walks the path paved by acts like the Freestyle Fellowship and Jurassic 5.