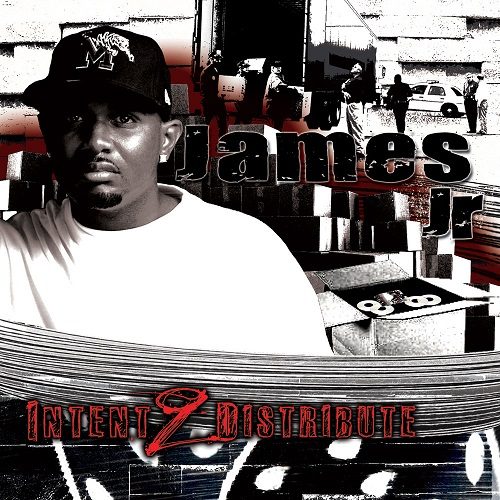 It’s nothing new to hear about a rapper overcoming adversities to become the next big thing. Tacoma, Washington-born emcee James Jr. intends to be the next to blow with his raps about “true life events and personal experiences”. According to the press kit, James Jr. was raised in a few locations that range from Tacoma to Richmond, Virginia to Clarksdale, Mississippi to Memphis, Tennessee. He was an excellent student in school and even graduated with honors. While he was pursing audio engineering, he came down with a severe case of pneumonia which caused him to leave school and battle the illness for two years. He wound up moving to Florida to make a name for himself. As fate would have it, James Jr. met his would-be future producing partner, Scott Coslett during a vacation in California, and through that association, he would land a deal with Spin Move Records. The culmination of all of the moves and turmoil in James Jr’s life was the release of his debut album, “Intent 2 Distribute”, which was released this past summer.

Jr. lists Master P, Cam’ron and the late, great Pimp C as his influences and songs like “Made” and “We Can Do That” certainly do well to conjure up memories of the mid-to-late 90’s version of Percy Miller. In fact, the aforementioned influences can be seen on many of the album’s eighteen tracks. The production of “Fuck A Thug” reminds me of Tony Snow and the personality he’d inject into his country rap tunes. James Jr. even incorporates the same type of flow that Pimp C was famous for which put heavy emphasis on the second-to-last syllable in every line. The first single that the album spawned was “Bluetooth”, and for as much as I’d hate to admit it…the track is catchy after a couple of listens, albeit a song about having sex without disconnecting a phone call. Hilarity (or perhaps disgust) ensues as James Jr. raps:

While it’s not the most lyrically complex, I suppose there’s nothing wrong with a bit of multi-tasking to pass the time. Other album highlights include the retrospective “Matrimony” and “Itz In Me”. The latter touches on the topic of people attempting to put on jewels, fancy shoes and clothes and expecting to magically become someone they really aren’t. It’s an epidemic according to Junior. For an album that clocks in over seventy minutes, “Rick” James Jr. manages to do well enough to hold my attention for most of the ordeal. Some songs like “All The Freaky Thangs” don’t really fit in with the rest of the album, but that’s alright. Aside from a few missteps, I’d say that this is a solid debut that should receive a decent amount of play in Memphis, and only time will tell if it will make it further down the distribution channel.