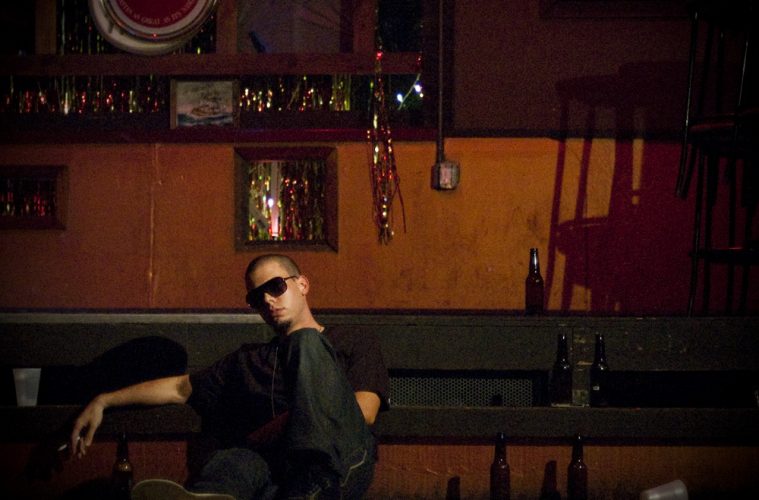 Apparently Mister D.P. can’t make up his mind whether to capitalize his name or not. When Guido Stern first covered “fortyeighthours” last May, everything including the album’s title was presented in lowercase. I honestly get a little sick of these games, including Daniel Dumile’s “ALL CAPS when you spell the man name” and the “let’s show how unassuming, shy and nerdy I am” lower caps of mc chris. Don’t even get me started on Kid Cudi – I refuse to play that shit and alternate it every other letter – that’s fucking impossible to type. This is completely my own opinion and nothing to do with the review, but unless you’ve had a few platinum records and can be recognized on sight anywhere you go, you don’t get to change your name to an eponymous unprounceable symbol, forcing everybody to refer to you as “The Artist Formerly Known As.” If you’re rich and famous, go ahead, be a weirdo. If you’re an up-and-coming artist nobody has heard of, follow the damn rules.

At least D.P. makes up for his indecision with a modicum of talent. Stern noted that he was looking forward to what D.P. came up with if his teaser album was literally recorded within the self-titled 48 hour timespan. It’s safe to say “Bar Tab Blues” is a successful and well-produced follow up, which eschews an intro and bullshit skits and gets straight into a bluesy Elton John piano vibe on “I Ain’t Crazy.” Now usually if you have to explain that you’re NOT crazy, there’s a good chance that your behavior and demeanor are such that most people would think you are to begin with. Guess what though? Trying to succeed as a solo rapper on a tiny independent label when the only buzz you have is the one you got from a comped bar tab at some shitty hole in the wall show IS crazy. D.P. is bucking the million-to-one odds that he’ll make it to the big time, and as long as he’s going for broke he’s at least taking the time to do it the right way with good beats and a flow I can’t hate.

“One two, let me start it right I address this shit with a FUCK YOU
And sign it all sincerely me, it’s never been so clear to me
You can have that back, I know exactly what I’m here to be
You was never hearin me, D.P. on that heresy
See me speakin blasphemy like Jesus Christ they after me
And you can have that back BITCH just give me back the half of me
Dealin with the devil I’m just bein what I have to be
I ain’t mad at the world, I just feel the world’s so mad at me
I’ve been so buried under bullets and bar tabs
Barflies with scars and scabs know where my heart’s at
Hard liquor, allathat, hard-on for a heart attack
And we was punk kids with two dime bags and a quarter sack
Somethin wrapped in plastic then stashed under the mattress
Never felt like danger ’til the day it’s turnin drastic
Never felt like lovin ’til the day somebody snatched it
Never felt so tough until the day you get your ass kicked”

D.P. clearly isn’t crazy, unless being observant about the world around you is a sign of insanity. There’s a slight hint of Slug to what D.P. is doing here, not in terms of his lyrical complexity or mic control intensity, but in terms of the dichotomy he walks between making something intensely personal that’s still meant to be consumed by a mainstream audience. It’s the self-produced beats that help D.P. stay grounded and keep the album from simply being a diary of poetry next to the lamp on the nightstand. The lead single “Hollow” finds D.P. playing the Everlast role on the hook, and he’s far from the worst singer in hip-hop, loping along over a jazzy piano bar melody. There are dark songs too, as “Pawn Shop Gun” is a believably angry tale of revenge against an unfaithful girlfriend where “blood stains gon’ cover up the love stains.” More often than not though D.P. is “Lost in the Music,” finding solace in creating raps that evoke a curiously effective mixture of Big B’s white trash rap and the cocky swagger of Flo Rida.

There’s a flipside to my praise of D.P.’s “Bar Tab Blues” though, which is that D.P. may have overplayed sticking to the theme he titled the album with. At some point every single song starts to blend together, and you can picture yourself at that hole in the wall drinking cheap $2 beers listening to some rapper you never heard of as the opening act. You don’t hate what he’s doing, but the beats and the singing start to blend together, and at some point you wish he’d sample some P-Funk or AC/DC, or freestyle over some Alchemist and Polow Da Don beats, because every single song seems to be him rapping to piano ivories. If you listen to “Street Lights” and “Wish I Knew” and can remember which is which a half hour later, I’m impressed. The same goes for the slow-paced and soulful “One Day” and the “up and down and turned around” crooning of “Let Me Go.” I’d kill to hear D.P. change it up a little bit, because clearly he’s a capable producer, lyricist AND verbalist, and it’s rare enough to be 2 out of the 3 let alone 1. “Bar Tab Blues” could certainly give them to you after 17 tracks, because D.P. is pretty damn good, but a shorter album with more variety in topic and production would be even better.