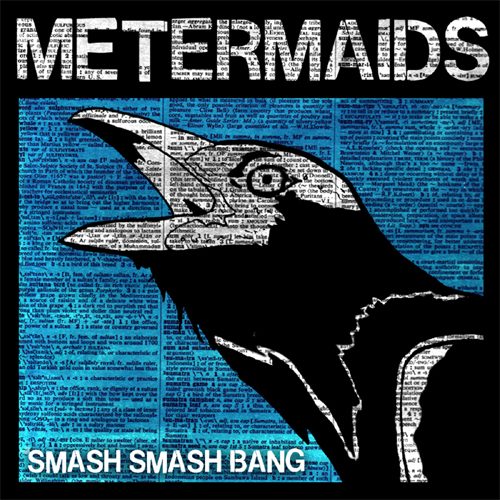 Swell and Sentence, the duo behind the pseudonym Metermaids, list a diverse range of influences to their rap style – Otis Redding, Modest Mouse, Stevie Wonder and The Roots among others. Well then! From that list I’d expect the Metermaids to be soulful, alternative rock style live hip-hop musicians with poignant lyrics. Amazingly their previous release “Nightlife” seems to have struck most of those chords, being described by one of our own staffers as “cater(ing) so perfectly [to] the more open-minded kids that love rock AS MUCH as they love hip-hop.”

I walked into the “Smash Smash Bang” EP with the preconceived notion I’d find their music to be equal parts Linkin Park, Beastie Boys and Stetsasonic and was not dismayed by the musical results. Although it can be hard to get a handle on a group over the short span of five tracks, there’s no question that Swell and Sentence are well met and form an ideal duo, offering raps so thematically and vocally united that it’s difficult (and ultimately unimportant) to remember who is who. “Blackout Baby” sums up their musical style quite well – energetic, a little bit angry, provocative and tailor made to get you up on your feet slam dancing to their beats. Even though the Metermaids duo say there’s “no tomorrow” on the chorus, the lyrics still offer hope:

“Spin the bottle, kiss the sky
It’s live or die, it’s all or nothing
Taste the blood, the hands are shaking
I’m just trying to chase the sun
Now or never, a place to run
I’ll part the streams, I’ll fucking sing, I’ll make shit up
And this from Brooklyn ugly
How she holds your face in your mistakes
It’s creating the pace lovely
I don’t know what I have
but there’s nothing left that you can take from me”

With a “less is more” philosophy to their hip-hop rock, Metermaids songs on this EP rarely (and just barely) crack the 3:30 mark. “Planes Down” is a 2:29 intense blast of audio terrorism promising to “bumrush the building (to) see what the inside’s like.” “Matchbooks” is their slowest and most somber song, punctuated by a soulful piano and tearful memories of the past. “Ghosts in the Radio” is more their style though, a speedily delivered rap loping across a jazzy rock’n’roll melody guaranteed to rock any juke joint. As good as the Metermaids sound on this EP, one really gets the feeling they burn brightest at a live show, so I hope I have the opportunity to see them soon.