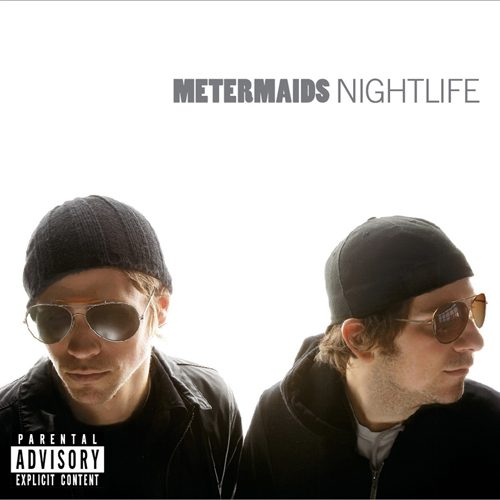 Here is an interesting proposition for you. What do you get if you cross an underground rapper with an indie rock fan? Some Bush-hater that raps about fucking women he’s in love with but never met? NO, silly, you get the Metermaids, of course! In fact, you’d get two of them â€“ Swell and Sentence. Here are a dynamic duo dropping a debut of devilishly addictive anthems that seem to be a direct result of their non-stop two years of touring. Rarely will you hear a group deliver a first album with such authority and command over a stage â€“ even if there isn’t one, they drag you into their world of live performance and make you feel like you’re front row and covered with other peoples sweat. It really is quite a nice feeling. (I’m assuming that loads of hot girls attend their concerts, by the way).

The two rappers are solid, if unspectacular, lyrics-wise. Even vocally, Swell and Sentence are probably little more than average. But when they get hyped up, they turn into beasts, motherfucker, BEASTS. Not to mention their choruses tend to verge on brilliant, especially in the first half of “Nightlife.” This is where their Indie sensibilities spring alive â€“ the anthemic “Come Home” is pure Arcade Fire with a bit of rapping chucked in, whilst I haven’t managed to get the opener “The Inside” out of my head for 5 days now. I can imagine the album getting spun to death in many a dorm room all over the USA â€“ it caters so perfectly for the more open-minded kids that love Rock AS MUCH as they love hip hop, and I’m one of them (although I’m a Brit, thus wired for that since birth).

Other standout tracks include the closer “Life Is Easy,” the kinetic “Breakdown” and the spine-tingling (and actually quite poppy) “Feel Alive.” It really isn’t often that the attached blurb can genuinely get away with hyperbole such as “a brand new sound in crossover music” but, to paraphrase McNulty from “The Wire,” fuck me, it’s true… That in itself would be meaningless if the music wasn’t up to much, but so much care and attention has gone into the production â€“ each track sounds consistent with the theme of the album, but the opening chords almost always sounds distinctive. Not an easy feat to achieve. Gradually, you start to realise that you may well have stumbled onto something rather special.

They may well have been compared to the Beastie Boys, but, to be honest, that comparison is a slightly lazy and obvious one. I happened to listen to “Paul’s Boutique” a couple of weeks ago, right before I received this â€“ and they are entirely different animals, to me at least. That classic BB sophomore was, and still is, the PERFECT album to play at a house party, a packed dorm room or any other confined space full of people. However, “Nightlife” by the Metermaids is much more suited to the live performance stage. It is, in essence, a concert captured in a recording booth. As a result, I can’t help but feel that on a few tracks, the magic is lost â€“ mainly because the same songs would be completely transformed into pure energy on stage (although “Funk Terrorist” is just a plain old stinker). Put simply, as an album, it is still a really good listen with a few fantastic songs and a consistent feel throughout â€“ I’m just not sure that I would automatically spend money on the LP itself. I would DEFINITELY spend double that amount on seeing them perform this album live, since that seems to be pretty much the point. In fact, I would even cop a “Live in Concert” version of this, if they happened to release it â€“ it would capture the crowd-energy in a much more suitable way, since it is literally seeping through the confines of the little shiny disc. Some artists can’t be caged, and the Metermaids seem like they thrive on direct interaction with an appreciative crowd. Either way, they have a bright future ahead of them.