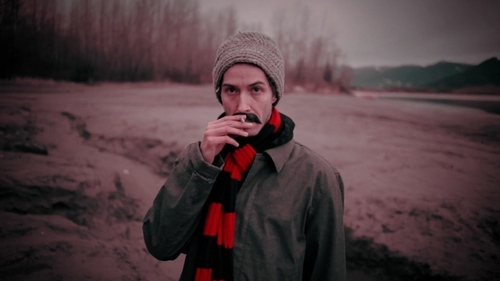 Who the heck is Ron Contour? The title of his 2001 album Moka Only Is… Ron Contour led people to believe that he and Moka Only are one and the same. Now, however, Moka says that’s untrue, and that Ron is his mustachioed cousin. A mustachioed cousin that he’s been working hard to put on for nearly a decade. With Contour’s latest album Saffron

which was produced entirely by Factor recently hitting stores, RapReviews set up an interview with both Ron and Moka to clear the confusion. Did we? Well, read the words of Ron Contour and Moka Only and you decide.

Adam Bernard: Why don’t you start by explaining the major differences between Moka Only and Ron Contour?

Ron Contour: Moka, I admire all his stuff, and he’s the one who put me on and all that sort of thing, but I just think my lyrics are a lot more colorful. There’s so much ground to be covered, and also Moka mostly concentrates on beats and all that sort of thing. I’m all about the lyrics and I just think there’s a lot of uncovered ground in the 1990’s and that’s what I’m trying to hold on to, to grasp, you know?

AB: Some of that is evident on your new album, Saffron

. Did you name it that because you’re a big fan of the culinary spice?

RC: That’s one reason. I spend a lot of time in the kitchen and that sort of thing. That was definitely a contributing factor. Pardon the pun. And also, the place where Factor’s from they actually grow saffron, the flower. They grow it by the multitude. It’s the Canadian prairies where he’s from, so anything goes out there, I’m sure.

AB: You know you have a very interesting accent.

Moka Only: He’s never even been to the UK. I don’t know why he has the British accent at times. I’ve never figured that out

RC: Are you poking fun at my American accent?

AB: Where are you actually from?

RC: I’m a dual citizen, I just won’t say of which countries. I’ve spent considerable time traveling all around and all that sort of thing. Currently I’m located in Vancouver, BC. Vancouver’s lovely, there are a lot of things going on over here. It jut keeps a fella bouncing.

AB: Speaking of bouncing, why don’t you tell me about the vibe you would you say Saffron has?

RC: We were trying to go for a folk-hop sort of direction. It seems he (Factor) was digging in the crates looking for folk records and it was in a lot of the beats that came out there. We basically wanted to paint a picture of autumn, that’s when we really made the album, so we were just trying to paint that tapestry, if you will.

AB: Saffron is a short album, essentially an EP. Did you go in looking to create a quick dose of music for the fans, and if so what went into that decision?

RC: First and foremost, a lot of albums these days are just long winded. There’s a lot of filler material and a whole lot of rappers really saying nothing, so we just like to keep it short. I share that sentiment with my cousin Moka, and I just don’t like long songs, I like short songs. The album came out a little bit shorter than I had anticipated, but better to be short and sweet than long and drawn out and boooring.

RC: Tell me who’s album is 79 minutes long? It sounds like something Madlib would do.

AB: Sadly, far too many artists do it. Speaking of a large number of artists, Canada has an amazing scene that we don’t get to hear much about in the States. Why is it so hard for Canadian artists to cross the border?

AB: The majority of artists in Canada blow up in Canada, but somewhere in customs they get stopped, because they don’t come over.

MO: Here’s my thing. I don’t do anything in Canada, I only do things in the US. I do some stuff in Canada, but it’s limited. I’ve always been the type, I think more regionally. Canada’s such a huge place. It’s impossible for me to say something about the “scene” in Canada because it’s 5,000 miles from coast to coast and there’s a lot of shit in-between, a lot of emptiness.

AB: What did you get out of making this album and what do you hope fans get out of it by listening to it?

RC: Just to have a bit of fun. I think we can both agree that in hip-hop people really seem to take themselves overly serious.

AB: Really? In hip-hop? I’ve NEVER heard that before.

MO: {*laughs*} I mean, and you know what, that’s fair game, too, but a little balance is warranted, as well. I like to remind people of that. I’ve been doing this shit for 20 years, so it’s gotta be fun otherwise I’l just do something else, like bee keeping.

AB: That was your previous gig?

MO: That was Ron’s previous gig. He actually took some time off rap in-between 2000 and 2008 and he was doing some bee keeping.

AB: I wouldn’t have imagined that. That doesn’t seem like a normal hip-hop hobby.

MO: He’s not a normal guy at all. It doesn’t really fly in the big cities, he had to relocate.

AB: Did he start a business, like Ron Contour’s Honey?

MO: Nah, it wasn’t that serious, it was just his own personal exploration into nature. He relocated somewhere in Wisconsin, just went at it for a few years. He chased girls. They found him tolerable.

AB: So he wasn’t just filling up those teddy bear squeeze bottles with his own personal honey?

MO: I’m not really sure how far into it he went, to tell you the truth. I’m in the midst of trying to set up a photo shoot for Ron based on a comic book. I’m gonna write a one page comic strip and then bring it to life with a photography session as if he’s like a superhero. I just don’t know what it’s gonna be used for.

AB: Are you still making bank of off that Len album?

MO: I never made any bank off of that Len album. I was asked to do a couple verses on the album, that’s basically it.

AB: Did you happen to get with the hot chick from the group?

AB: Speaking of collaborations, I know you’ve produced extensively for Ron, but do you think there could be a lyrical collaboration in the future between you two?

MO: We’re family and our voices actually do sound very similar. With the whole debacle about people thinking it’s the same person, I’ve been a little bit hesitant to do it. We’ll see what happens in the future. People get called hypocrites for changing their minds and doing something different, but that’s human nature. Anything goes.

AB: Finally, give people one thing about Ron Contour that they can relate to.

MO: {*laughs*} Everything. Ron’s just a normal guy. Ron’s got a great mustache. I think that’s something that a lot of people can relate to. The ironic mustache has definitely come back into effect in certain places. Here’s something that people don’t know about Ron… the mustache isn’t real. He actually didn’t grow the mustache and he hasn’t really explained to anybody why he does the fake mustache thing. He’s been rockin it for a couple years now. He won’t go out in public without the fake mustache on. I don’t know if he thinks he’s ultra famous, which I can assure he’s not. I don’t know what he’s afraid of, but he won’t go out without his face mustachioed. If you’re lucky you might find some of the old Ron Contour pictures from the 90’s when he didn’t have a mustache and he kinda looked like me.