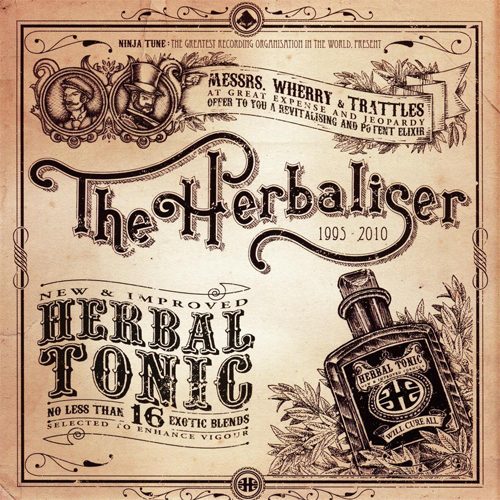 The Herbaliser is a name I’ve known for a long, long time. Long before the internet was overflowing with information I had to scavenge to get my fix. Being a fan of bay area gangsta rap in Texas, it wasn’t easy trying to figure out when the latest indie release was dropping. I remember unsuccessfully trying to find a place to purchase Herm’s albums in the late 1990s, only to be asked “Did you mean Herbaliser?” I did not mean Herbaliser and the resentment lead me to ignore the British production duo out of spite. Not until “Herbal Tonic,” the group’s greatest hits CD, can I say I am familiar with more than their name. Shame on me, really. It wasn’t the duo’s fault their British label had more internet presence than Herm’s bay area outfit. Hindsight also tells me that those Herm CDs really weren’t worth all that trouble. Thankfully, fate has given me the chance to redeem myself over 10 years later. “Herbal Tonic” shows the rap world that anyone sleeping on The Herbaliser is only hurting themselves.

It goes without saying, but production is clearly the focus on this collection. Meant to encompass a lengthy and diverse career, “Herbal Tonic” captures the full scope of what Herbaliser has to offer. Features from Jean Grae, MF Doom, and Roots Manuva provide a dose of rap on the collection, but ultimately your enjoyment of this collection will depend on your appreciation of The Herbaliser’s funky, jazzy, and eclectic mix of beats. “Gadget Funk” lives up to its name as the duo composes a funky, electric beat that would make George Clinton proud. Though the track is funk at its soul, the spacey synths and robotic voice samples give the funk a new twist. “The Missing Suitcase” takes a different direction, with uptempo, but steady, drums providing stability as the instruments seem to chase each other over the track. It’s the type of song you might expect on the score to a James Bond film, telling the story through music as it might be happening on the screen. The duo has an odd way of making music that is different, yet naturally fits the vibe of the CD. “The Sensual Woman” features what sounds like 1960s free-spirited sexuality seminar set over a non-descript musical background. The cheesy vocals are the focus, but the soft, plodding music to the background adds a seriousness and sincerity to the entire affair.

For those who can only take instrumentals in small doses, the aforementioned emcees do well in breaking the monotony. Jean Grae dominates as the duo plucked her from the obscurity of the NYC underground in the mid 1990s. “Tea & Beer” stands out the most as it find Jean flaunting a playful arrogance you don’t see too often from her. “Starlight” finds Roots Manuva contributing a verse towards the end. MF Doom steals the spotlight with a vintage performance on “It Ain’t Nuttin’.” The only drawback is that there are so few emcees spotlighted on “Herbal Tonic.” One would hope the duo’s talents would have been appreciated by many more emcees over the years.

“Herbal Tonic” does a great job of capturing what The Herbaliser is about. Without the benefit of familiarity with their entire catalog I can’t say whether they actually captured “the best” of the duo’s career. What I can say is, as a new listener, this collection served its purpose of presenting the production duo in a positive light. While the music lacks the memorable melodies I usually require of my music, it makes up for that with creativity and diversity. The duo’s jazzy, funky, and laidback style won’t appeal to everyone, but for those who can appreciate it “Herbal Tonic” will certainly whet your appetite.