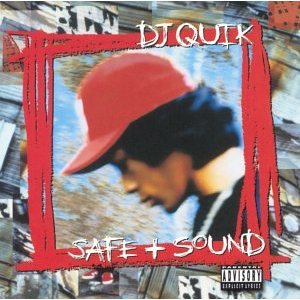 “I don’t give a fuck, my attitude is Gotti
And I’m hard to love, ’cause I don’t love nobody
All I give a fuck about is music and sex
A fifth of Remy Martin and some big fat checks”

Thus begins DJ Quik’s third album “Safe + Sound.” In 1995, DJ Quik was practically a household name on the West Coast, becoming a platinum-selling artist with his 1991 debut “Quik Is the Name” and following it up with 1992’s “Way 2 Fonky,” both of which established him as California’s premier rapper/producer not named Andre Young. In fact, the Compton native’s first two go-rounds were two of the albums that inspired the mid-90s West Coast explosion, during which major labels scrambled to sign established acts from as far south as San Diego, as far north as Sacramento, and everywhere in between. In ’95 the rap-listening public was tuned into the distinct sounds of Compton, Long Beach, Oakland, and Vallejo, and Quik’s long-awaited third album once again placed him among the hip hop elite.

Musically “Safe + Sound” is leaps and bounds above all of Quik’s work that preceded it, which isn’t to take anything away from either of his earlier albums in the slightest. Both “Quik Is the Name” and “Way 2 Fonky” were phenomenal musically, showcasing his deft hands on the boards as he executed a seamless West Coast funk that would help to define the genre. Still, they sound decidedly old school and pale in comparison to the musical magnificence of “Safe + Sound,” if not in quality then in complexity. Light on samples and heavy on live instrumentation, “Safe + Sound” catapulted Quik from the status of a producer to that of a full-fledged composer. It is this soundâ€”the quick, winding basslines, tinny high hats, smooth instrumental solos, soulful pipes, and Roger Troutman’s talkboxâ€”that defined him as a musician and, with varying moderations, he more or less developed for the rest of his career. Where “Quik Is the Name” and “Way 2 Fonky” featured cleverly arranged grooves, “Safe + Sound” features full-blown masterpiecesâ€”rich soundscapes and masterfully arranged orchestrations with dense layers of sounds, intricate rhythms, and well-balanced songwriting.

“Safe + Sound” is an ideal summertime listen, emitting infectiously laidback vibes over its remarkably consistent 68-minute running time. Some of the finest tracks are those which are designed for simple relaxation. “Summer Breeze” is a classic warm-weather jam, anchored by a twangy funk guitar, breezy string arrangement, and soulful hook delivered by Dionne Knighton. Quik’s nostalgic lyrics bring to mind DJ Jazzy Jeff & The Fresh Prince’s “Summertime,” reminiscing over barbecues at the park, young love, and how fast time passes as one grows up. The excellent title track also chronicles struggles and discoveries made growing up, and musically “Tha Ho In You” sounds tailored for the midsummer picnic, although the lewd subject matter might make it inappropriate for most occasions of that nature. The memorable “Somethin’ 4 tha Mood” is accented by sparkly keyboards and a woozy synth and surprises with a brilliant two-minute flute solo in the outro, while the hook on the smooth-as-silk “Itz Your Fantasy” advises the listener to “Chill, chiiilllâ€¦” “Safe + Sound” also includes my favorite of the “Quik’s Groove” instrumental series, an irresistible guitar and flute number that wouldn’t sound out of place on a jazz record.

Despite the often laidback feel, most of Quik’s lyrics are dominated by three subjects: sex, partying, and his enemies, namely MC Eiht. Saying Quik likes sex is like saying Too Short has a mild affinity for the pimping profession. When he raps about making love, it isn’t in passing or general references, it’s in vivid, long-winded descriptions of organs and orgasms. The sheer lewdness of “Diggin’ U Out” and “Can I Eat It?,” where Quik raps about his distaste for the “salmon sandwich,” may be too much for some listeners to stomach. He’s also extremely confrontationalâ€”no less than three tracks, including the intro, mention MC Eiht by name. Eiht made no secret of the beef on his long-running “Def Wish” series, a beef stemming back their days as Compton gang members, and Quik comes firing on all cylinders on “Safe + Sound”â€”check the infamous “Dollaz & Sense,” one of the most ruthless diss tracks of all time:

“Now Aaron Tyler, tell my why you seem so tame
When I caught you at the airport, shakin’ like a crap game
You looked up and you seen my niggas comin’
And you looked like your bitch ass was ’bout to start runnin’
But all I wanted to do was kick a little conversation
And see if we could fix this little situation
But would I fuck you up was what you wondered
Yeah, that’s probably why you changed your little pager number
But bitches like you don’t grow
You can’t even look me in my eye, let alone go toe to toe
And callin’ me skinny, you’s a clown
I’ma call you Theo, ’cause you weigh ninety-two point three pounds
Wack-ass actor, movie script killer
Fool don’t you know, Quik is still the nigga
Compton psycho, boy you oughta quit
Your records don’t hit, and bitches don’t jock your shit
You need to stay down you Compton clown
And get off of the nuts of the niggas with guts
Because I’m down with the Trees, I’m down with Death Row
I’m down with Black Tone, and I’m down with the fo’
So when we cross paths and I hope that’s soon
I’ma boot your motherfuckin’ ass to the moon
You need to quit bangin’ under false pretense
Cause if don’t make dollaz, it don’t make sense”

The deliciously funky “Let You Havit” is also aimed straight at Eiht’s gut with gun threats and a clever talkbox outro, and the upbeat, horn-laced opener “Get At Me” is a subtle diss to former pal AMG.

So what’s so likable about Quik? Well, besides his superb musicianship, he has an unusual presence on the mic. His delivery, somewhat reminiscent of Eazy-E’s, is impossible to tune outâ€”his songs fail as background music because one can’t help but hang on his every word. But more importantly, he’s got a good-natured, youthful enthusiasm, and more than anything else he’s out to have a good time, sometimes in spite of himself. The bonus track “Tanqueray,” a profile of a party at Quik’s house, is a perfect example:

“Now let me tell you about a party that I threw last year
Niggas kept haulin’ that party over here
Too many niggas so I had to get a keg of Budweiser
But it had me pissin’ down my leg
So I bought somethin’ that’ll last longer
Somethin’ a little harder, somethin’ a little stronger
Somethin’ that’ll definitely make your day
So what you say muthafucka, want some Tanqueray?
Now the niggas up on it went and got some orange juice
‘Cause they know that Tanqueray’ll get them hoes loose
Fillin’ up your glass, boy you tryin’ to trip?
Nigga you can’t handle a full glass, fool take a sip
But I’m not stingy so I filled it to the rim
He went up in my kitchen with a bitch named Kim
Straight bareback in the pussy he dove
Huh, bustin’ nuts all on my stove”

Although he was contractually bound to Profile, Quik was down with the Death Row family in ’95, performing in their infamous set at the Source Awards that year. In fact, Suge Knight is credited as the executive producer to “Safe + Sound.” Still, Quik milks none of his connections for guest appearances, instead opting to again enlist his trusty “Class of ’91” posse including Hi-C, 2nd II None, and Playa Hamm. Quik opts for his Compton buddies because they have a special chemistry, and they again prove serviceable on the ultra-funky “Sucka Free” and standout posse cut “Keep tha ‘P’ in It,” which also features Kam and 2-Tone, maintaining that “Nothin’ has changed” despite their fame.

DJ Quik is dead serious about his craft, and the results can’t be fronted on. “Safe + Sound” is an absolute musical gem and a quintessential summer album featuring his signature “p-funk” that stands out even among the myriad commercial and critical hits from L.A. in ’95. Depending on the day, I’d pick either this or 1998’s “Rhythm-Al-Ism” as my pick of the DJ Quik litter, but either way it’s a top-notch effort from the best producer that Cali calls its own.