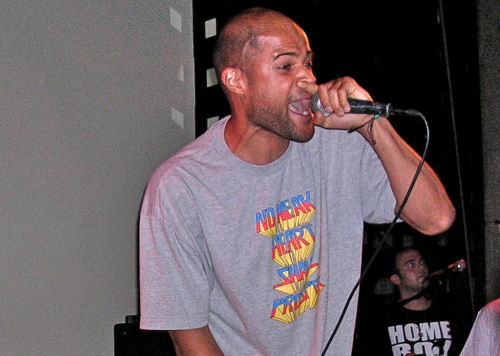 When I hopped off the 1 train at Houston a little after 9pm on June 2nd and crossed the street to Varick I was ready for an amazing night. Homeboy Sandman had released *The Good Sun*, his third full length album, but his first that has national distribution, earlier in the day and the album release party was being held at SOBs. Just the fact that the event was being held at such a prestigious place was a huge achievement in and of itself, but when I walked in to see it was already filling up at 9pm I knew the night was going to be special.

By the time the clock hit ten SOBs was packed wall to wall with people, many of whom were emcees from the scene who had been working with and following Sandman since his earliest performances in 2007. When I caught up with Sandman the next day he, in true Sandman form, spread the credit for the packed house around. “The room packed on a Tuesday like that was just representative to me of the immense strength of what talent, honesty, and truth can make happen when we support each other,” he explained, adding “it was my album release show, but I looked at that as a major feat and a major achievement for you, for the B-List, for Conscious, who does Bondfire, for Tasty Keish, who does Bondfire, and Tah Phrum Duh Bush, who was in the house and has been rocking with me from the beginning of time. I really see us as all different cogs in this major machine and packing that room like that was big for me for that reason.”

The show was big for hip-hop, as well, as sixteen time Sin Sin Freestyle Monday’s champion Chaz Kangas told me “even if I never left Minnesota and just heard of him from trading tapes, I would be just as excited that someone is getting this attention who is experimental and progressive without forgetting that rap music is supposed to sound good. It’s rare rap music is this technically impressive and innovative while still being catchy. Cutting edge has never been this fun.”

Before Sandman hit the stage a litany of talented acts preceded him. Sleepwalkas led off, followed by Rabbi Darkside, fresh off of his appearance on Showtime’s Nurse Betty, along with Core Rhythm and Yako 440. After them Donwill and VonPea of Tanya Morgan had a set, as did J-Live, before Spec Boogie came on, as he was releasing an album on this night, as well.

When I asked Sandman about his feelings on having the likes of Tanya Morgan and J-Live, artists a lot of his peers look up to, opening for him, he once again took the humble route, saying “it was an honor to have Tanya Morgan and J-Live in the house warming things up before me. I don’t even look at it as they opened up for me. It just sounds strange, ‘they opened up for me.’ They didn’t open for me, they set it off.” Pausing for a second he added “I guess it hasn’t really set in.”

When it came to Sandman’s set he led of with “Verbal Soul Clap Mania” and followed it with a number of songs off of *The Good Sun*. After a handful of new tracks Sandman recognized that this was his crowd, and that many of the people in it were very familiar with his work, so he broke into a few classics – “We Can Fly,” “Airwave Air Raid,” and “Lightning Bolt. Lightning Rod” – before getting back to the new music.

Fresh Daily and Pso of the AOK Collective joined him on stage for a bit, and for his final song Sandman decided to have a freestyle session over Guns N Roses’ “Sweet Child O’ Mine,” which he turned into “Freestyle O’ Mine.” On this night he asked two of the city’s finest freestylers, Chaz Kangas and Kosha Dillz, to join him. Neither artist knew they were going to be called up. It was an act Kosha Dillz later told me he considered “selfless,” pointing out “he let everyone contribute to his success by incorporating all of NYC and more into that performance of his.”

Sandman’s selflessness wasn’t limited to just artists on this night, either. At one point a young woman shouted out to him about a show she was promoting and Kosha Dillz notes, “he plugged it for her. He said ‘support your friends. support your friends.’ I can’t get that out of my head. It’s the realest thing anyone has ever said. He is always at the shows, supporting his friends.”

Support like that isn’t something you see every day, and it’s one of the qualities of Homeboy Sandman, in addition to his incredible rhyme skills, that truly set him apart from the pack. For Sandman, however, it’s second nature, as he feels “nice guys always finish first.”

Chaz Kangas sums up why that ideology works so well for Sandman when he notes “often in rap, even your closest allies in their heart-of-hearts are only trying to do for themselves and will be as easily swayed the second they get the slightest attention for anything. Sandman, on the other hand, is just as accessible and genuine as he’s ever been and only wants the best for everyone. Six years ago when I moved to New York, (Troma Entertainment founder) Lloyd Kaufman told me something about the film industry that I fully believe applies to rap. 98% of the people you’re going to meet in your field are wretched, awful drecks of humanity with no redeeming qualities and will be nothing but a cancer to everything in your world. The remaining 2%, however, are the absolute best people you will ever meet in your life. I consider Sandman part of that 2%.”

The rest of the crowd that was at the show considers him part of that 2%, as well, as on June 2nd at SOBs the release of *The Good Sun* turned into a coronation for one of New York City’s favorite sons.