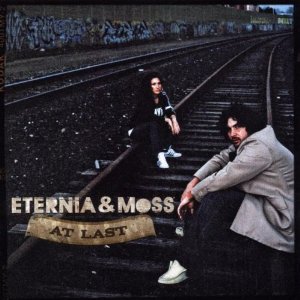 A few tidbits that may or may not be of interest regarding Eternia: she’s a girl. She’s white. She’s from Canada. Heck, she used to date Apathy. Any three of these may comprise three strikes for some listeners, but if not then there’s a good chance you’ll like “At Last,” her collaboration album with fellow Toronto native MoSS, a producer who has quietly amassed credits on albums by AZ, Big Noyd, Slum Village, KRS-One, Obie Trice, Joe Budden, Joell Ortiz, Big Shug, Kool G Rap, Canibus, and damn near the whole Boot Camp Clik and Wu-Tang Clan. The scarcity of female MCs in rap’s mainstream is the rare trend mirrored in underground hip hop, and having aligned herself with celebrated male rappers from across the underground spectrum, she joins a dwindling but elite few. Arriving on the celebrated Fatbeats label after purported years in the making, “At Last” is Eternia’s second proper album following 2005’s “It’s Called Life” and two collections of unreleased material.

Eternia is an extremely aggressive rapper who is not concerned with toning down her boasts and threats in the interest of being ladylike. This quality is one most listeners aren’t used to, and some may find it off-putting to hear such hostile remarks from her. Many of her female predecessors, from Eve to Psalm One, found rap as an outlet for their insecurities growing up, and devoted a good deal of their rhymes just to contending that they could hang with the boys. Eternia is no exception to either count; the opener, tellingly titled “Any Man,” wastes no time in setting up Eternia’s battle rap:

Eternia is completely humorless, but two things can’t be denied: she is fiercely determined, and she can seriously spit. E strikes me as a female Termanology, who coincidentally appears on “At Last.” She has flow for days, an endless supply of punchlines, nostalgia for the ’90s boom bap sound, and her lyrics are largely focused on her own skills and supremacy above her nameless competitors. Then again, she might be more akin to her friends from A.O.T.P., providing tireless lyrical onslaughts with little reprieve. She holds her own trading bars with Joell Ortiz on the vicious “It’s Funny,” then shares the mic with Rah Digga and Rage of Death Row fame on “The BBQ,” an all-female nod to Main Source’s 1991 posse cut “Live at the Barbeque,” even borrowing the hook from the classic. Eternia’s verse recalls Joe Fatal’s on the original:

“Eternia, the goddess of this rap shit
And it’s obvious we got this locked ’cause look how it lasted
Uphill climb since I was in the baby basket
Relevant to many who don’t follow the masses
Laugh at you, ’cause I can do what you can do better than you
Smack a few rappers ’til they act like vegetables
Impeccable, my time to shine is now, incredible
So cop the record now before it’s a collectible
All natural, the way we eat the flow is intangible
Fetuses that were raised to beat the beat like animals
Matter of fact, the facts in your paper’s manufactured, not accurate
I got a whole track that can back me wit’
Blaow, I know a couple ladies that can end you right now
Skill that steady and we don’t back down
Deadly with the tool of your choice, that’s sound
Yeah, so how you like me now?”

If one found Eternia’s battle rhymes tiresome, “Pass That,” a deeply personal narration of adolescent struggle, might provide the remedy:

“When I was ten I prayed to God I wouldn’t sin again
Raced around the church walls like a flowerbed
Too aware for my age of what the pastor said
Bred guilt in me, yep, for every time he’d break the bread
My mother on her knees for hours dyin’ to repent
Tryin’ to make sure we don’t end up where our father went
Or we’ll go to hell and burn slow
My father the apostle if you ask him though, whoa
Yep, that’s right, he got a saint for a wife
More than he bargained for, he’s livin’ in the street life
And opposites attract like bugs to streetlights
He was like ‘She knew the rules and broke ’em like headlights’
Aight, so one plus one, that equals three babies
One pops that’s crazy, one church lady
One restraining order, one shotgun, and maybe or not
We got a riot on our hands with the cops
And that’s when I’d pop up, the strip locks down
My mother’d run for cover with her brother outta town
My God the only father I got that hold me down
So I kneel beside the bed and pray every night now”

The album’s second act is painfully reflective. “To the Past” again alludes to her dark childhood, and one of the best tracks, “The Half,” is dedicated to her half-brother, pledging that despite only sharing half of his genes, she considers him a full sibling. “Played Out” chronicles a separate breakup in each verse, and “To the Future” recalls the rift between her parents and her leaving home as a teenager, explaining her “past evil demons” resulting from sour relationships. This type of introspection is by far Eternia’s most captivating material, revealing a multifaceted character and providing glimpses of the factors that molded her royally violent persona. “Dear Mr. Bacardi” is an honest ode to alcohol, acknowledging her inability to leave it alone despite her awareness of its effect on her.

MoSS has kept a low profile despite his work with infamous and acclaimed rap acts, and his beats here sport a technically impeccable boom bap sound somewhat reminiscent of the late-90s East Coast style. DJ Premier made him the first producer signed to his Works of Mart label project, and comparisons between MoSS and Premo are somewhat inevitableâ€”his loops, dusty orchestrations, and hooks crafted from classic rap lines strung together owe great debts to the legend. The standouts are grimy, heavy tracks perfectly tailored for Eternia’s style. However, one would never mistake MoSS and Premierâ€”the tracks on “At Last” lack the soul and magic of Premo productions, and there’s a reason why you’ve heard MoSS’ tracks for your favorite rappers but are probably still unfamiliar with his name. His beats are the type of endlessly solid yet unobtrusive tracks that lyrical rappers shine on without ever threatening to steal the spotlight from the MC. While this quality is ideal for an AZ or a Canibus, it’s not necessarily for Eternia: her lyrics are often battle-oriented, focused on shunning competitors and celebrating her own superiority, and some of her verses are pretty interchangeable. While the beats knock and the lyrics hit hard, the result isn’t always great songs: the music grows repetitive, some songs lack direction, and the hooks are impersonal.

The in-your-face aggression returns on the title track, a strong collaboration with Reef the Lost Cauze and Termanology featuring one of MoSS’ best productions with a hard-hitting piano cadence and horn fanfare. Toya and Maestro Fresh Wes appear on “Day in the Life,” a decent but well-produced track recounting an average day as an underground rapper.

Objectively, some of Eternia’s coveted underground rap audience will not be able to take seriously the mean-mugging and bash-your-face-in rhymes from a petite white girl, but for a female of any color or origin to be cosigned by industry heavyweights without having to rely on booty shorts and licking her lips is an achievement and a testament to her rhymes. I could see listeners labeling her anything from the next in the lineage of great femcees to just a seriously pissed-off white girl, but “At Last” proves that she has skills that belie her appearance. Eternia is focused on kicking battle rhymes but most impresses me with her personal narratives, and in the future I’d like to see her continue this approach, and perhaps try on a few more producers while continuing to collaborate with her equally potent male counterparts.