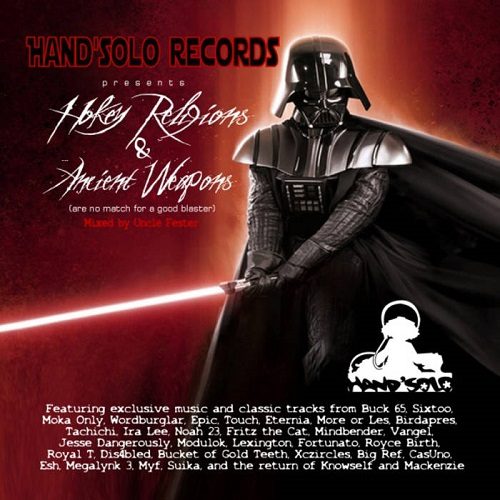 Devoted Star Wars nerds already get it. The rest of you are probably scratching your heads. To be fair the first time I reviewed a Wordburglar 12″ I didn’t make the immediate connection, because to my ear “hand” rhymes with “sand.” The title of this Hand’Solo compilation album instantly crystallized it for me though, because as fast as you can say “womp rat” I can hear Harrison Ford’s voice echoing in my head.

“Hokey religions and ancient weapons are no match for a good blaster at your side, kid.”

And to think on last week’s AngryMarks Podcast the regulars in the chatroom were castigating me for not remembering anything significant about Tatooine than it was a big desert full of nothing at the ass end of the galaxy. (Don’t miss this week’s show – we’re going to talk about UFC 89, UFC 90 and the collapse of EliteXC with special guest and noted MMA columnist Mike Coughlin.)

“If there’s a bright center to the universe, you’re on the planet that it’s farthest from.”

I wonder if lesser known Canadian rap artists ever get that same feeling. Obviously when you’ve achieved the threshold of fame of a Kardinal Offishall or a Dan-e-o you’re sure to be a success North AND South of the Great Lakes; otherwise… maybe it’s toiling in obscurity on Uncle Owen and Aunt Beru’s farm.

“I find your lack of faith disturbing.”

Okay big guy! Don’t constrict my vocal chords shut with your magical Dark Side of the Force powers. I’ve got faith in Canadian hip-hop. I spent years advocating for Maestro Fresh Wes even when the nerdiest of my hip-hop friends wouldn’t give him the time of day. Even Maestro has to seem like a mainstream name compared to the various Hand’Solo artists on “Hokey Religions & Ancient Weapons.” I recognize one out of every 4 to 5 names – Buck 65, Jesse Dangerously, Moka Only, Sixtoo, Eternia for example.

“The Jedi are extinct, their fire has gone out of the universe. You, my friend, are all that’s left of their religion.”

Not true! Canadian rap is alive and well on “Hokey Religions & Ancient Weapons,” even though it occasionally takes a turn towards the weird or downright absurd. Take “Rhyming Into a 4 Track” by Epic & Touch. The beat is actually a lot better than the title suggests – in fact it’s pretty fucking dope and the turntablist beat juggling is a nice touch. The problem is that Epic is almost painful to listen to, and even Hand’Solo’s PR describes him as rapping “like a frail man who woke up from a coma two days ago.” At least they’re honest.

On the other hand Wordburglar excels on “Best in Show,” an inventive and musically whimsical song “with more punchlines than the Late Show staff.” At only 1:40 long the track is far too short, which is okay for the blended mixtape vibe this comp is on but still highly unsatisfying when lesser tracks get far more length of exposure.

“Why I should stick my neck out for you is far beyond my capacity!”

Well I’ll stick my neck out for Hand’Solo because what they do right on “Hokey Religions & Ancient Weapons” they do in spades. Suika’s “Falcon Millenium Ninja” seems to be rapped in Japanese and I can’t make heads or tails of it, but it’s done with such conviction and boom bap I can’t help but bop to it. The plucky bass of Jesse Dangerously & Modulok’s “Tour de Gallows” is like a beatnik hip-hop hell only Mr. Len and El-P could have come up with, for all the right reasons. Sixtoo’s “Live to DAT” showcases one of the best Northern rappers you don’t know about yet in a hilarious two minute dose. (Do yourself a favor and Google him after this review.) Collaborative songs like “Bury the Bodies” featuring Fritz the Cat, Mindbender & Vangel merge Star Wars samples with the best in cocksure indie raps. More or Les rips flute samples and classical sounds with his witty flow on “Talk 2 the Hand (Solo)” all while “trying to bring intelligence back into jams.” Most songs on this CD do.

“You will never find a more wretched hive of scum and villainy.”

Not true Obi-Wan! Most of “Hokey Religions & Ancient Weapons” is damn good hip-hop music with a little bit of a Northern touch. At times the cultural references will fly over the heads of American rap fans (such as “I’m a left-wing Canadian like Steve Shutt”) but for the most part beats and rhymes cross all international boundaries and timezones when they’re good. Were it not for the fact this is a mixtape that often doesn’t feature full length songs I would have liked it a whole lot more.

“I don’t like you either. You just watch yourself. We’re wanted men.”

Well I tried, but even with the Force of a positive review you can’t win them all.