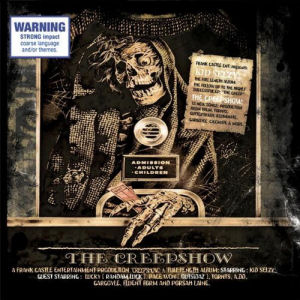 Kid Selzy made his worldwide debut on “The Creep” to mixed reviews. KS got props for his gruff delivery, a decent selection of beats and punchlines for underground rap heads. Guido Stern did offer these criticisms though: “One wonders exactly why he’s so mad at the world.” “On nearly every track Selzy berates ‘fuckin faggotsâ€¦.fuckin cunts!’ [and] it sounds like he’s trying too hard.”

It’s clear from the second track of Selzy’s new album “The Creepshow” that he has no desire to clean up his language, deal with his rage issues or become any less anti-gay. Sentiments like “got no time for homos imitating Snoop saying FO’ SHEEZY” won’t offend the majority of his listeners though. Now on one hand it’s fair to argue that the way most rappers throw around the word “faggot” it’s become a rather generic diss on anyone perceived to not be worthy of comparison as an artist. On the other hand Selzy does go out of his way toSPECIFICALLY question the sexuality of his peers, making a case that only straight is right and that if he implies you are a homosexual (or God forbid you actually are) you’re automatically worthy of contempt and scorn or worse. I’ve heard a few Australian rappers offer up rather vitriolic sentiments before (Maundz comes to mind) but Selzy’s aggression seems over the top even by misogynistic and homophobic rap standards:

“Melbourne, it’s Hellbourne, bitch we burn like hell
I’m too nice on mics – you’d rather get in an Octagon like Chuck Liddell
Than try your luck and spit with me, when it comes to rap youse pathetic to me
Cause you emcees don’t even exist hypothetically
And you couldn’t see me if you knew where I’d be
by going in the future and following me, after being frozen cryogenically
See technically you’re a rapper but to me, you’re just a fag in a FUBU jumper
With a Boston accent, playing a part like an actor
We some creeps like the mutants in The Hills Have Eyes comin at’cha
Cause the air’s laced with fuckin fumes from a nuclear reactor
[…]
That’s coke and dope, that’s no hope of gettin big and makin it rich
Tighten the rope, she can’t climax unless I’m rapin the bitch
So put your pen down and bow down, you don’t want it with me punk
You the type of pussy to get smashed and beaten down like Britney’s cunt
Uhh, diss me that’s a mistake you gon’ wish you didn’t start it
I make you and your makeup run cause you wear mascara like Good Charlotte”

Let’s be honest about this – few people who listen to rap music are going to find these sentiments offensive. In fact it’s more likely that such blatant hatred will engender the opposite reaction and make Kid Selzy something of a cult hero for being a man’s man and posturing like an ultimate alpha male – and the fact he’s referencing Chuck Liddell to make his point is no coincidence. It’s probably of more concern to me as a writer that I’ve become this inured to gay bashing in rap music that someone has to be that hateful just to catch my attention, but (and this is key) if Selzy weren’t a good rapper he WOULDN’T get my attention. Is he a great rapper? Well no one’s going to compare him to Black Thought, Nas or Gift of Gab any time soon but he’s good by punchline rap standards and pretty damn good by Australian rap standards. When you put his homophobic hatred to the side and focus on his music, the songs themselves acquit Selzy well. “Amard” has an intriguing mixture of guitars from L.I.S.N. ranging from folksy to heavy metal, with Selzy’s honest assessment of his own issues (“I know I’ve got some”). Paddy-O’s work on “Trios Amigos” sets up a surprising triumvirate of Selzy, a.DD and Pacewon. “Xanax” featuring Gargoyle sounds as frantic as an overdose between the rhymes and Illuminate’s beats; coincidentally Gargoyle produces “The Bells,” one of this CD’s best songs.

In short Kid Selzy’s “The Creepshow” is an album of contradictions. Selzy is clearly intelligent enough to be aware of what he’s saying, smart enough to work with top flight producers in Australia to make sure it’s heard, and slick enough to pull rappers from overseas to appear as guest emcees on his album. His gruff vocal delivery does take getting used to though, and some people may never get used to his unapologetic bashing of both perceived and actual homosexuals. On the plus side his accent is actually quite easy to understand, which may in some respects actually be a downside when he goes overboard with a message of hate that would make Fred Phelps proud. Personally I find the world to be too crowded with a plurality of cultures, religions and sexual preferences for me to hate that which is not my own, but presumably the freedom of speech in Australia must be like that in the U.S. so I’ll support Kid Selzy’s right to say even that which I don’t agree with. Most of the time he’s a good emcee, the rest I can live with.