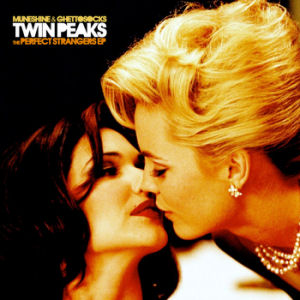 Canada Month, the hangover? Hardly. Fact is, rappers from the Great North have been absolutely killing it in 2010 with records from the likes of Shad, Incise, Moka Only, the Sweatshop Union crew, and others bound to end up on year-end lists such that RR’s October features only provided a glimpse of the quality hip hop coming from the Canadian scene this year. And if “Perfect Strangers,” a prelude to Twin Peaks’ upcoming full-length, is any indication, there’s plenty more to look forward to on the horizon.

Twin Peaks is the result of two creative giants joining forces in the humorous Halifax talent Ghettosocks and critical darling Muneshine, a prolific rapper/producer based in Toronto. Coming off the well-received “Open House” with Saint just last year, Mune once again proves that his talents are as well-suited for the group setting as they are solo. That said, even with production from M-Phazes, Suff Daddy, Rich Kidd, Bigg Bix, and Jorun Bombay, Ghettosocks’ fingerprints are all over this EP, with his off-the-wall references and comedic goofiness that make it easy to overlook his consummate skills on the mic. Both MCs flow effortlessly trading four bars at a time on the cleverly ironic opener “Audrey Horne,” with a funny hook and whimsical beat incorporating stuttering vocal bites:

Mune: “Goin’ in, that’s the term, ain’t it?
Blackin’ out, seein’ red , I prefer latex to gettin’ burned
Wait, sex? Nope, goin’ in like the rappers do
Leave ’em black and blue, rap’s Crash Bandicoot”

Socks: “Man, we smoother than a baby’s ass
Shootin’ down a luge tube movin’ crazy fast
My breathtakin’ nuts shaven made your lady gasp
Got mad goons in Rangoon , makin’ eighties cash”

Ghettosocks’ humor is definitely a bit left-of-center as evidenced by his often free-association rhymes, but what’s immediately clear is that he and Mune had a blast recording this EP. Mune delivers a slyly personal verse toward an ex-girlfriend to open “For You,” but Socks responds with a hilarious counter threatening to “go with your baby, sort of like missionaries on a road trip to Haiti.” Mune’s smooth, nimble delivery meshes well with Socks’ more conversational yet timely vocals, and the production is intoxicating, richly evoking a distant realm of nostalgic sounds reminiscent of 1980s’ television themes. The tasteful piano licks and boom-bap drums and scratches of “Prestige Worldwide” are a perfect template for an exercise in chemistry by the duo, who deliver tongue-in-cheek tag team verses about their prowess with the finer sex. “The Black Lodge” is an eerie-sounding concept song that’s classic Ghettosocks, as the two paint the scene of a seemingly extraterrestrial nightspot. M-Phazes laces the closer “Kaboom” with a sweet soul outfit, and both MCs respond in form.

Two technically superb MCs teaming up with seamless chemistry? Check. Songs with unique concepts, wild humor, and a vivid mood that keep the listener coming back for more? Got ’em. Dope beats and production? Mm-hmm. A couple of hilarious videos that add another level of appeal to the EP? You betcha. The union of Muneshine and Ghettosocks has given birth to a sound and approach distinct from either of their solo work, further proving their versatility. “Perfect Strangers” is lovably strange for its own sake and is as fun to listen to as it obviously was for Socks and Mune to record, providing plenty of incentive to patiently await “Kissing Hands and Shaking Babies.”