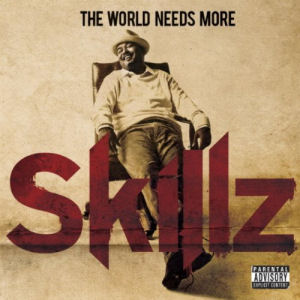 “Stand up or sit down
My mind make money so I’m livin for the right now
A lot of cats fell to the game
And we all could have been like dark-skinned Jermaine
So now I smile at my haters
And deep down I know that they appreciate it
It’s what you slow success
I’m takin all bets, no regrets”

Hip-hop’s most famous ghostwriter shows no signs of slowing down in 2010 after a fifteen year hip-hop career. In fact if anything Shaquan Lewis is turning things up a notch with the release of “The World Needs More Skillz.” The title could be perceived as arrogance by the haters he is addressing above, but the saying always goes it’s not cocky if you’re being honest. Honestly Skillz is right. He’s the kind of name that gets brought up any time great rappers and lyricists are discussed, the prototypical “rapper’s favorite rapper” who suffers from undeserved lack of commercial success no matter how critically acclaimed his albums are. Behind the scenes he’s written dozens of the songs you know word for word from other emcees, but his very success in this endeavor disallows him from taking credit. The world needs more Skillz not only because he’s good, he makes the WORLD look good. If he ghostwrote a song for Waka Flocka Flame, he wouldn’t suck – well for at least 3-5 minutes. On his own he’d go back to being shit.

It’s hard to say beats have been a factor in Skillz success as a soloist. The quality of what he chooses to rap over has always been at least decent, often good, and more than not quite exceptional. If he were a great punchline rapper, suave storyteller and fly braggadocious emcee with no beats he’d have the same stellar lyrical reputation but even less units sold. Still there’s little doubt on “The World Needs More Skillz” that both the artist and his record label are putting their absolute all into it this time, trying to make his songs so undeniable that one or two would HAVE to be commercial hits this time. The R. Baker D & Dustin ‘Deuce’ Scott laced “Call Me Crazy” featuring Raheem DeVaughn pushes the underground rap hero farther into quiet storm crossover territory than he’s ever been, while the versatile Skillz avoids the trap of being labelled cornball by crafting a compelling tale of trying to win over a skeptical woman’s heart. It’s no more a sellout than Joell Ortiz’ “Call Me” was earlier this year and it’s hard to imagine it not being an equally big breakout hit:

“Uhh, just don’t get scared
They say a closed mouth don’t get fed
So it’s up to us to change it
If you can picture that, I can DAMN sho’ frame it
They say love can be dangerous
But I don’t think so if you’re speakin the same language
Mmm, you’re nothin less than fine
You never have to guess what’s on my mind”

If “The World Needs More Skillz” was 13 tracks of Skillz chasing the fame he’s long deserved, the world would have the right to be skeptical about this being his breakout album. Deuce & Skillz team up to produce “Flash of Genius” to show that his disdain for less skilled emcees has not been diluted one bit, and that he’s perfectly willing to go on attack with double entendre raps filled with vitriol:

“They said your man’s single was on some flame all shit
I clicked the play button – the same old shit!
How you gon’ hit when your aim all shit?
Eat some vegetables and change yo’ shit!
Crowd so thick I need prescription glasses
We backstage sextin, you textin for passes
You seen when his genius flashes
and rappers lookin slower than retarded molasses
I keep my friends at a close space
Keep my enemies so close than I can punch ’em in the face
Wait! I’m ahead by a couple of laps Niggaz couldn’t fuck with me if I wrote THEY raps”

That’s the classic Skillz that has always paid his bills, which hip-hop fans have come to know and expect over the years. It’s not in short supply anywhere on this album. Skillz stays brash about living well thanks to his pen on self-produced suave songs like “Good Money,” teams with Sound H for “Going Up” to proudly proclaim “this is what the future gon’ sound like” and by the end R. Baker and D. Scott help him proclaim what might otherwise seem obvious – he’s “Still Standing.” Obvious the epic gospel presentation is rightfully triumphant, and Skillz makes sure to note “we all fall down, but that don’t mean you gotta stay down.” True indeed God, true indeed. Skillz has definitely taken his share of knocks from his doubters and critics throughout the decades, but he’s certainly prepared to own the 2010’s with “The World Needs More Skillz.” Even though there is a somber note on this album when Skillz pays tribute to his friend Adam (DJ AM from Crazy Town) most of this album is a celebration of his career from way back when to the present day, and an indication he’ll keep on giving us quality hip-hop for just as many years more.