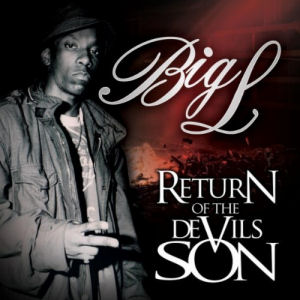 At first sight, “Return of the Devil’s Son” is another eyewash of a posthumous rap album, suggesting a ‘return’ that sadly cannot happen and masquerading already released tracks by altering their names. That at least was likely the major gripe of Big L collectors once they heard the project late last year. The positives are that members of the family are involved in the release and that the tracks were (largely) left as they were recorded.

The gems on this collection are the tracks Big L recorded before or for his full-length debut “Lifestylez Ov Da Poor & Dangerous.” “Devil’s Son” (irritatingly listed as “Devil’s Son From Lifestylze”), the 1993 promo for Columbia, is Big L at his nastiest, the Nas samples inspiring satanic verses that hope to stir more controversy than Salman Rushdie’s:

“Enemies I be buckin’ quick
My moms know who I am cause she know who she was fuckin’ with
On my scalp a 666, no tricks
When I catch fits my mom picks up the crucifix
And I kill chumps for the cheapest price
I’m rollin’ with Satan, not Jesus Christ
Enemies, I got several done
Big L straight from hell, the motherfuckin’ Devil’s Son”

This is followed by more devilish deeds that are best left unquoted. The J-Love remix of “Danger Zone,” “Zone of Danger,” recalls how “Devil’s Son,” while not included on “Lifestylez,” still echoed in L’s work as a major label artist:

“I’m chokin’ enemies till they start turnin’ pale
Satan said I’m learnin’ well, ‘Big L’s gonna burn in hell’
Front and get scarred cause your rap style ain’t even hard
I run with a thievin’ squad and none of us believe in God
[…]
I got styles you can’t copy, bitch
It’s the triple six in the mix, straight from H-E-double hockey sticks
Every Sunday a nun lay from my gun spray
Fuck Carlito, we doin’ shit the Devil Son’s way
[…]
I’m on some satanic shit strictly
Little kids be wakin’ up cryin’ yellin’, ‘Mommy, Big L is comin’ to get me!”

Meanwhile “I Won’t” (f/k/a “How Will I Make It”) indicates why Lamont Coleman would think of himself as the son of Satan in the first place:

“Where I grew up it was a livin’ hell
Then I start to realize â€“ I’m better off in a prison cell
Now I can sleep, now I can eat
Can’t hit skins, but I wasn’t hittin’ skins when I was in the street
Aiyo, I just can’t take it
And every day I ask myself, how will I make it?”

Whatever the date of origin of “How Will I Make It,” it is proof that the Harlem MC was able to spin the same genuine ghetto tales as many of his nineties New York neighbors. There is generally a serious side to his work, present through all the jabs and jokes. Take “Clinic” a/k/a “I Shoulda Used a Rubba” or “I Shoulda Worn a Rubba” (here: “I Should Have Used a Rubber”), which is vintage mid-’90s Big L, the safe sex message effectively coming from a typically hard-headed male’s point of view.

Although Big L was already a full-grown MC at the time of his first appearances on Lord Finesse and Showbiz & A.G. records, some of his earlier steps may have lacked the poignancy that makes us today reminisce over the late great Big L. In that context maybe “Devil’s Son” can be seen as a drastic measure to showcase his potential – even if only hardcore rap fans would – hopefully – understand all the reasons why a rapper would say such things. Then again the title isn’t far fetched for a rapper whose earlier group named itself after a Stephen King short story. “Principal of the New School” ostensibly predates “Devil’s Son” with its Kane/Kool G-inspired flows and boasts, of note being L’s ambition to lead a new generation of MC’s.

Obviously L’s single greatest influence was Lord Finesse, to whom he owes more than cadence and rhyme style. Still at the early stages of a production career that would eventually rival the rap career, in 1993 Finesse put together a contemporary beat complete with echoing horns and a lively rhythm section for “Unexpected Flava,” a party tune very much in the vein of Finesse’s “Return of the Funky Man” LP. By that time, L had the confident flow to go with the braggadocious rhymes, resulting indeed in “rap skills sharp as a razor.” “School Days” is another testimony of L’s formative years as he rocks a dense DITC production (Showbiz?) and takes a good-natured trip down memory lane.

On “Return of the Devil’s Son,” that leaves us with four more studio tracks. “Right to the Top” is a Domingo production that made the rounds as “Double Up” featuring Royal Flush, a Kool G Rap in beast mode and Big L tragically hoping to “see the grave from old age and not a nine slug.” Three tracks are said to date from 1996, recorded for a second album for Columbia. “Games Females Play” (here: “If You Not Aware”), “Hit It” (“Yes You Can”) and “Now or Never” (“Power Moves”) all fail to meet the standard set by “Lifestylez,” and, while tailored after the laid-back club fare that was in at the time, have limited commercial appeal. Soon going the independent route with the well-received “Ebonics” b/w “Size ‘Em Up” single, Big L would rebound from his major label experience just before his life and career were cut short in 1999.

With just a debut to his name and his second album (2000’s “The Big Picture”) already being a posthumous one, Big L bootleg compilations were in high demand in the past decade. “Return of the Devil’s Son” may be the most official release since “The Big Picture,” but its presentation and numerous mixtape appearances don’t distinguish it much from all those less official CD’s. Worse even, the last couple of tracks are plagued by a technical problem (although, don’t bother in the case of the weak ‘original’ of “I Don’t Understand It”), but in the end the amount of untagged, full-length – and allegedly even remastered – tracks more than makes up for that. For anyone interested in this Big L guy, start with “Lifestylez Ov Da Poor & Dangerous,” move on to “The Big Picture” and then consider “Return of the Devil’s Son” for the songs reviewed above, which you’ll rather get from here than anywhere else. Either way “Return of the Devil’s Son” helps bring to mind the immense talent of this potential rap game heavy hitter. It’s a shame he’s no longer with us.