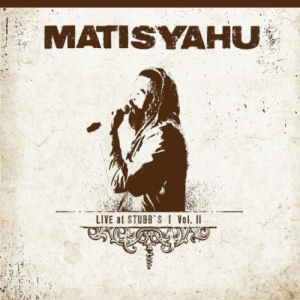 There’s a roots reggae meets rap, Bob Marley meets Kardinal Offishall, old school protest song meets modern day struggle feel to Matisyahu’s “One Day.” The song engenders such warm fuzzy feelings of positivity that it’s hard to be cynical when hearing it, even when it’s used in advertising to pitch products or TV shows to you. Even without knowing a thing about Matisyahu you can picture him with a full head of dreads, rocking a reggae festival in the heart of Kingston until the sun goes down, with throngs of adoring fans singing along.

That sun better not be setting on a Friday night, because Matisyahu is the spearhead for a musical movement bringing Jewish faith to reggae music. This was such an unexpected and unconventional combination that he was at first regarded as a curiosity by the pop music world, which sent his first mainstream single “King Without a Crown” rocketing up the charts. It was (and is) a catchy tune, but let’s be perfectly honest – people looked at Matisyahu as being an oddball. After all aren’t most reggae artists Rastas, with a few Christians sprinkled in here and there? Either way you usually hear “praise to Jah” and not “praise to Jehovah” in reggae music. There were undoubtedly people who though that Jewish reggae was a fad that would pass, and so too would Matisyahu’s career.

Six years later he’s still here, and arguably even more popular than he was then. To some degree the existence of Live at Stubb’s Vol. II

is itself a testament to that popularity, since many artists are never big enough to have one live album – this is actually his THIRD. Was there a Volume 1.5? No. He released “Live at Twist & Shout” in 2009. What exactly is Stubb’s though? If you live in Austin, Texas there’s no need to ask. If you don’t, it’s a barbecue joint as well renowned for founder Christopher B. ‘Stubb’ Stubblefield’s sauces as it is for the live musical performances held there. Matisyahu is neither the first nor the last artist to join the tradition of recording a live album there.

Large enthusiastic crowds and echoing acoustics definitely give one the “being there” feeling that a live album needs to be enjoyable. On that basis alone the hour plus of “Live at Stubb’s Vol. II” would be a winner thanks to the venue. Then again if Matisyahu wasn’t a versatile, passionate and musically adventurous artist there wouldn’t be a half decade plus career let alone a new live album to talk about. The epic twelve minute performance of “Youth” drifts freely and gleefully between genres. At times the guitars shred like a hard rock metal band, and at times they strum like a Carribean cool breeze, but whatever the mood Matisyahu plays to the setting. He strikes that difficult live performance balance between knowing he’s the star people paid to see, yet letting the musicians on stage with him get in their own solos and instrumental freestyles. It shouldn’t be this easy to close your mind’s eye and see yourself in a throng of fervent fans, but you can almost smell the sweat and the beer wafting up your nostrils if you try. Matisyahu is feeling the crowd’s energy and he starts rapping to them:

“The place lays phased, like a warrior slayed
Engraved into the space, with his sword still raised
Layers of charcoal, sprayed through hallways
Praise relays off the walls, echoing always
Dirt covered earth lays beneath my rib cage
giving birth to overgrowth invading onto path ways
Burnt out trees cover streets where children once played
Sown seeds decay through sacred stepping stones in disarray
Where the alter used to be placed inter-changed for bloodstains
Sunrays illuminate the smoke filled haze
The trace of incense scents of sacrifice stayed…”

As Jewish reggae rap artists go he’s not bad with the flow. Wait – are there any others? Let’s be honest – if you know one you know Matisyahu, and if you know two you know one more than most people do. I say that with all due respect to the dozens, possibly hundreds or even thousands who just haven’t achieved the mainstream commercial exposure Matisyahu has. Hopefully they aren’t envious of his success, because that would strongly go against the cool and spiritual reggae vibes that Matisyahu is putting out on songs like “Open the Gates” and “Time of Your Song.” To be perfectly blunt about it, Matisyahu transcends his faith to a degree that you can’t really tell if he’s Rasta or Hasidic and you really shouldn’t care about it. He might say he’s a faithful believer first and a musician second, but listening to “Live at Stubb’s Vol. II” convinces me it’s actually the other way around. You can tell the crowd at Stubb’s digs his vibe regardless of whether or not they share his faith, and I do too.