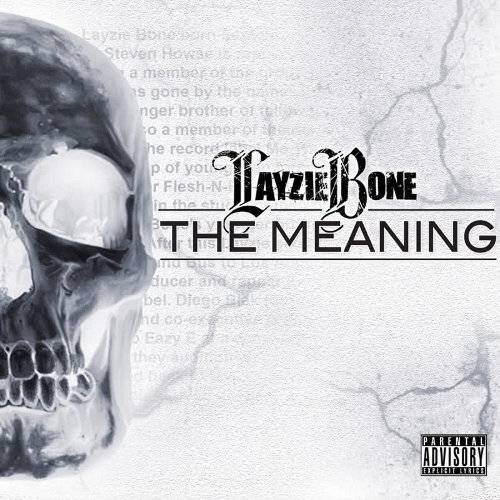 Bone Thugs-N-Harmony might be hip hop’s most prolific crew to date, continuing to record music at a dizzying rate seventeen years after they first broke the charts and demanding incessant loyalty from their international legion of fans. Most any of their countless releases, even the most minor ones, offer something for fans to get excited about, be it the rapid, melodic sing-song flows, reliable thuggish-ruggish-ness, or pure charisma. Still, there’s so darn much of it that the output is hardly consistent, and they’ve released their share of duds like Layzie’s wholly underwhelming “The Definition,” one of two sixteen-track efforts released on February 22, 2011. Although to date L-Burna has been eluded by the success of Bone brothers Krayzie and Bizzy in the solo realm, at his best he’s a vocal innovator and superbly talented rapper with undeniable appeal, making “The Definition” all the more disappointing. Like its counterpart, “The Meaning” is mostly produced by Lay’s protÃ©gÃ© Thin C and is heavy on guest appearances.

“The Meaning” is also very similar to “The Definition” in its top-heaviness, beginning with its strongest material and quickly tailing off. Opener “The Game Ain’t Ready” features the entire BTNH lineup and strong production rivaling the best tracks from “Uni5: The World’s Enemy.” Kingsmen’s heavy beat on “We At It Again” is perfectly tailored for Lay’s trademark delivery, but they aren’t so successful on “Real As It Gets,” a lethargic posse cut approaching seven minutes in duration. “I’m That Fly” and “Every Night” are awkward, lukewarm club tracks, the latter featuring Bow Wow staying true to form and following the latest hot trend with a dead-ringer of a Drake impression, thin autotuned singing and all. “Difficult Question” attempts to pull at the heartstrings, and although Lay drops a few thought-provoking lines Thin C lets him down with a mechanical beat that’s uncooperative. He fares better on “Better Days,” an unorthodox but successful arrangement that allows Layzie, Krayzie, and Felecia to execute a dramatic, inspirational winner.

“Everybody” is the second half’s highlight, a feel-good warm weather anthem featuring Ya Boy. Lay delivers an infectious hook over DJ Rek’s appealing production and both MCs turn in memorable performances. The lively closer “Top of the List” with Big Sloan also succeeds in closing the album on a good note. Unfortunately, they’re flanked by an entirely mediocre batch, marked by soulless, over-computerized production, uninspired hooks and concepts, weak guest spots, and insubstantial lyrics. The Too Short duet “She Bad” should provide ammo to anyone who maintains that Shorty the Pimp fell off, and when the beats slack as they’re wont to do, the lyrics tend not to compensate. Bone’s often-redundant lyrics have the capacity to be charming, providing a sense of familiarity and universality to their rhymes, but there’s too much recycling of “Meet Me in the Sky,” “Crept and We Came,” “See Me Shine,” and “Lockdown Love” among these rhymes.

“The Definition” and “The Meaning” are two sides to the same coin, and while “The Meaning” may be marginally better it’s still a forgettable collection of largely insubstantial material. For my money Lil’ Lay still has one of the illest flows in the game, but this material is mostly beneath him. Luckily, these records will most likely soon be relegated to obscurity as the next “Bone Brothers” album is slated for next week.