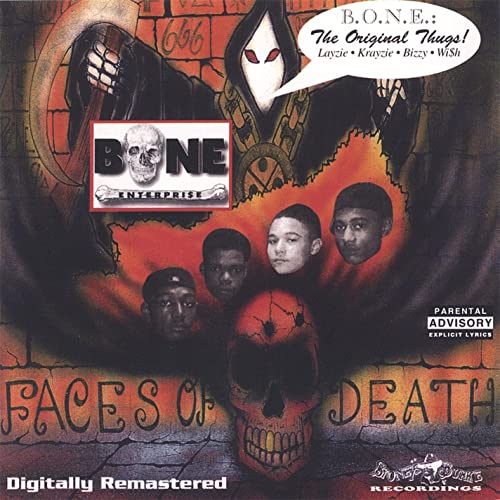 Before “Thuggish Ruggish Bone” put Bone Thugs-N-Harmony on the map, the aspiring Cleveland rappers took their first shot at fame under the name B.O.N.E. Enterpri$e. The lineup is largely the one you’d know as classic Bone Thugs: Layzie Bone, Wish Bone, Bizzy Bone and Krayzie Bone. Only Layzie Bone’s older brother Flesh-n-Bone is missing, but he’s not listed on the cover of “Faces of Death” nor in the shoutouts at the end of “Everyday Thang.”

The “We Live in Brooklyn, Baby” sample is obvious on the track but not unwelcome. If you’ve never heard of this Bone Thugs album though it’s probably not surprising. Had the group not impressed Eazy-E enough to sign them to Ruthless Records, this probably would have been the beginning and end of their career. “Faces of Death” was released on Stoney Burke Recordings, a label owned by Cleveland record store owner Kermit Henderson. That was certainly enough to get them some traction in their home city, but didn’t offer them the kind of exposure to get beyond Ohio. Quite frankly some of the songs here wouldn’t deserve it. The poorly conceived 2 Live Crew meets reggae vibes of “Def Dick” are awful at best.

Even though the voices of the members of Bone are largely recognizable despite their young age (Layzie and Krayzie in particular) there’s an unmistakable amateur feeling to this entire effort. It’s not surprising that Stoney Burke “digitally remastered” this album to cash in on Bone Thugs once they achieved mainstream success, but I’m not sure how much could be done to improve songs like “Bless Da 40oz.” If I said it sounds like it was recorded on a four track, that might be overstating it, but the best compliment I can give it is it that they sound like they’re imitating N.W.A. It’s little wonder they sought out Eazy-E to try to get signed to a deal.

Occasionally “Faces of Death” gets labeled as a “horrorcore” album, but other than the cover art and the song “Hell Sent,” that connections seems tenuous at best. Early Triple Six Mafia (Three 6 Mafia) records are much easier to identify by this label, but so are records by Natas, Gravediggaz and Flatlinerz released around the same time. “Hell Sent” seems at best to have been designed for the shock value, but the corny singing and poorly mastered vocals take away any edge the song could have had. It instead plays out out like a bad imitation of the artists listed above. None of the trademark layered harmonies and sing-rap flows that made Bone popular and famous are to be found here.

The same can be said for the entire album as a whole. The most redeeming quality about this release is that it’s under 36 minutes in length, and the second most redeeming is that every rap group has to get their start somewhere. If this were a video game I’d describe “Faces of Death” as being the alpha version of Bone Thugs. We’re not even to beta yet and certainly not ready for demonstration copies to be sent out to reviewers. They’d get there eventually with a little help from Eric Wright before his untimely demise, and continue to refine their sound in his honor after he was gone.