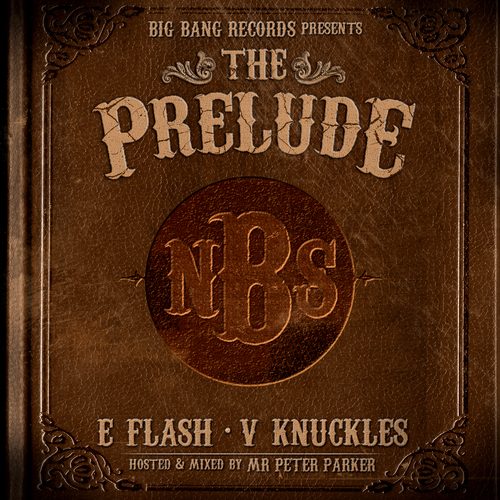 Although this is the first album by Boston MCs the Natural Born Spitters, they aren’t rookies to hip-hop. The duo of Imam “E’Flash” Bilal-Firmin and Rahim “V Knuckles” Muhammad have been on the mixtape scene for a while now, and if their songs can be believed, they’ve toured the world. “The Prelude” was originally released as a DJ Peter Parker hosted mixtape last fall, and is getting an official release now.

Right of the bat, two things are apparent about N.B.S.: they have been doing this a while, but they are still hungry. They attack the mic with skill that comes from putting in long hours working on their craft, and a passion that shows that they mean what they are spitting. They switch between rapping about life on the streets and more club-friendly topics like touring, partying, and getting women.

Much of the album sees the duo telling street tales over moody beats, like on “All For The Power.”  Knuckles deliberate flow fits the muted piano-laced beat perfectly, as he drops lines like:

Productions is provided by Lord Relic, J. Cardim, Iroq, O.M.B., J. Hunt, Major Music, Stu Bangas, Matt Trump, Zack Johnsen, Cyrus the Great, and Odiie Wolf. They try out several different sounds, from the dancehall-tinged “Jump Up” to the blaring synths of “You Can’t Knock the Hustle” to the chopped-up soul of “B.O.S.T.O.N.” and “Middlesex County.” They lean too heavy on mid-tempo and melancholy, and while none of the beats are terrible, none are exceptional either.

Knuckles and Flash can handle themselves on the mic, but they tend to yell their rhymes, and yell them a couple BPMs slower than the beat. At times it seems like they aren’t rapping too the beat at all; their cadence and pace are noticeably off. They wield their rhymes like heavy instruments, sacrificing finesse and nimbleness for power.

It may be that “The Prelude” wasn’t my style, or I’m jaded from hearing too much similar-sounding street rap, but I wasn’t feeling what N.B.S. were offering. It’s obvious that they put a lot of heart and time into their craft, and it could be that their no-frills tales of street life finds an enthusiastic audience, but it ain’t me. If you want to hear coke-rap, Boston style, then “The Prelude” might be for you.