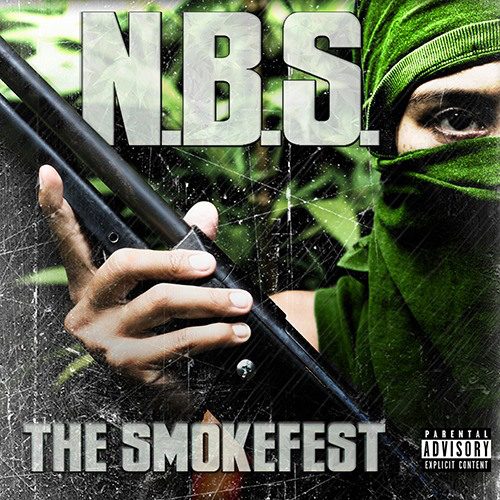 N.B.S. are dropping “The Smokefest” at a time in the U.S. where there is increasing tolerance of marijuana. “The Smokefest” can’t rely on a cloud of controversy to sell this album – the inclusion of a marijuana recipe card will barely raise an eyebrow. The green artwork and pro-marijuana stance will certainly appeal to an audience already receptive to smoking – fans of groups like Cypress Hill and the Kottonmouth Kings among others. N.B.S. includes a recipe card inside “The Smokefest” which describes how to make “cannabutter” on one side, and a recipe for “cannabis cookies” made with said same ingredient on the other side.

Of course neither side tells you how to acquire the cannabis to make your cannabutter, let alone whether you live in a state where that would be practical. Anybody who has a true medical need is probably not going to share their stash with you just to bake cookies. Even without organized advocacy though there’s always been a tolerance of weed in rap, long before the rest of the U.S. caught up to hip-hop culture. Rolling up a joint may have once had a more rebellious cachet, but mainstream rap albums without ganja references tends to be the exception. To really stir up conversation you need to have great beats, great topics, a great flow and often a great guest star. “Til the World Ends” featuring Reks has all of the above.

It’s hardly the exception. “Last Lyricist Alive” has a beat by 75Crates & Rockwheezey, scratches by DJ Grazzhoppa and a cameo by Ali Vegas. “Vices” has an edgy electronic sound courtesy Quarantine, and a cameo from underground favorite Bishop Lamont. My personal favorite though is Torae guesting on the piano medley of Mac & Y-Not for “With the Pen.” Other notable guest shots on “The Smokefest” include Slaine on the autotune influenced “Green Flag Gang,” Smiley and Sicknature on “Smiley” and Tum Tum on “So High.” And yes if you were expecting some stereotypes of cannabis inspired hip-hop, there’s the obligatory Jamaican/reggae sound of “Marley Tribute” which encourages listeners to “roll it up and we’ll get high.” It’s no more or less than I expect.

After listening to “The Smokefest” I can’t help but feel the increasingly blase attitude toward weed makes albums which market themselves with pot symbolism and themes less impactful. I think the imagery and the hemp (recipe) card inside made me expect something more overt, but instead it’s just standard fare from a well established group on an equally well established indie label. The good news is that means it’s a solid hour of music that’s neither a waste of time or money – the bad news is that I don’t think a song referencing Bob Marley is strong advocacy these days; even among Rastafarians marijuana usage is not universally accepted. I think calling this album “Boston’s Finest” and dropping the greenery would have been much better from a marketing standpoint. If you liked “The Prelude” this is a worthy follow-up.