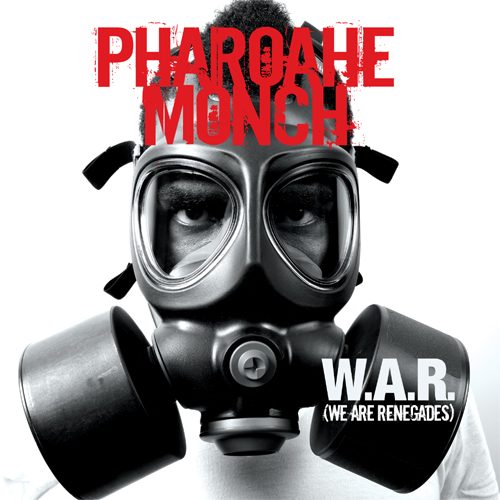 “I got a middle finger for mass media, mute the news
Cause when the gun draws, you see familiar views
Which gives me the right to break the rules
Say FUCK radio if the people can’t pick and choose
While BET gets screwed by Viacom
The new revolutionary is shy and modest
And I, brush fire rappers, five alarm
motivational music after I am gone”

The cynicism Pharoahe Monch displays on the title track of “W.A.R.” is not unwarranted. Dating all the way back to the early 1990’s, the man born Troy Donald Jamerson has been amazing hip-hop audiences and drawing rave reviews from even the snottiest of discerning critics. Very few people in this lifetime have been worthy of the praise “talent on loan from God,” but Monch might be the rare case where that phrase doesn’t nearly go far enough. Calling what he and Prince Poetry did on the self-titled Organized Konfusion debut either “rap” or “poetry” is a disservice to both words – it was BEYOND anything hip-hop had previously achieved. Twenty years later it still sounds like it came out yesterday. Unfortunately a precedent was set then that has followed Monch well into his solo career: no matter how lauded his work was, modest album sales led to mega frustration.

“My inner visions, mysticism, call me Mr. Wisdom
They wanna turn the globe into a prison
And being sick is better than being dead
Cause when you sick and in bed you’re indebted to meds
Clones chickens walking around without heads
The food is contaminated, the water got led in it
Population control, make the babies sick
RFID chips, RU-486″

Pharoahe Monch has spent many years channeling those frustrations into anthemic singles like the bouncy “Oh No” (featuring the late great Nate Dogg) and the club shaking “Simon Says,” but even successful singles were just that – successful singles. Monch raps are often tagged as being too complex, too conceptual, too over the heads of his audience. Rather than toning it down to reach greater levels of commercial success, “W.A.R.” is nothing less than the declaration of hostility which its acronym describes. It’s not a coincidence that Immortal Technique joins Pharoahe on the titular track. The fiery Afro-Peruvian Che Guevara of rap is is equally intelligent and even MORE belligerent when it comes to his frustrations – not just with the music industry but with a global economic system that holds down the poor while making the rich ever wealthier. Putting these two men together is lighting a road flare and throwing it into a warehouse packed with fireworks – explosive and quite a spectacle to behold.

Tech: “We Are Renegades, this means W.A.R.
Sixteenth bust to break unjust laws
Overthrow regimes in the name of the cause
Renegades, never slaves – THIS, MEANS, WAR
One hundred percent, uncut raw
Fuck limited freedom – nigga we want more
The machine is corrupted, down to the core
Rebel army motherfucker – THIS, MEANS, WAR”

Paired with the guitar playing of Vernon Reid (Living Colour) this song packs quite a powerful punch. You may even want to strap on a gas mask similar to the one Pharoahe sports on the cover lest you be overcome by the biological warfare they commit on your ears. As Mr. Jamerson is wont to do this album is highly conceptual, supposedly having been sent back in time from the year 2023 by “Lieutenant Gaviston,” who is attempting to change history for the better with a massive WikiLeaks-esque dump of information. This is heady stuff but Monch is assisted on this urgent mission by a specially selected squadron of guest rappers and producers that are on his level. The strings arranged by Charly East and Jean Grae beautifully assist Mike Loe’s beat on “Black Hand Side,” and guest lyricists Phonte and Styles P add on to the revolution that’s not being televised. “Haile Selassie Karate” has vintage 70’s crooning courtesy of Mr. Porter and a THUMPING bass backing courtesy of Sam I Am. And if you’re ready for W.A.R. then you need only call on “The Hitman” as M-Phazes funk blazes up the cut so Monch can get his lyrical nut:

“Some people say I’m extreme, broadcast the beam live through a meme
Screamin as Jimmy Iovine is corrupt as Don King
Boxed into the ghetto, so be champ of the bling
Industry’s the arena, the internet is the ring
You train article queens to sling music to fiends
Then Def Jam’s supreme team the same thing
except mo’ critical now, it’s digital cocaine
The goal to control every individual’s brain – LIKE
Cadillacs for contracts in the sixties
Now it’s rap ’til you 60 for contract 360
The trick – switch the degrees with the three sixes
Artists are left with zero, you know who receive the riches”

It has to be stated fairly or otherwise that sentiments such as these are not going to improve Pharoahe Monch’s marketability in a world where a few conglomerates control a majority of media outlets. They say what gets printed, they say what gets played on the air, they say what videos get shown on TV. (Then again, it doesn’t seem like most “music” television channels even pretend to be about music any more – another issue for another day.) Even as a completely independent party who is beholden to no bottom line but my own I offer you this fair warning – Monch has clearly long since passed the point of giving a fuck if you like him or not. He long since forgot about pushing the envelope and just ripped the whole envelope to shreds and threw it in the incinerator. The Diamond D produced single “Shine” featuring Mela Machinko is both incredibly beautiful and brutal, rapping about “the cesspool called New York Shitty/I call it that cause it smell like SHIT!” The M-Phazes second single “Clap (One Day)” may have been more radio friendly by a tiny degree, and that degree bleeps out at least the first ten seconds altogether.

Let’s bottom line this: “W.A.R. (We Are Renegades)” lives up to the billing of being against the grain throughout 13 tracks that are as challenging as they are fascinating. Any time you put the talented Pharoahe Monch on a beat you have the chance to do something special, and when he shares the spotlight with the likes of Jean Grae and Jill Scott they have the chance to do something special too. Every one plays their part perfectly in sending this information back from the future to your present day ear, but since Monch always seems to be twenty years ahead of his time even when that’s NOT his concept a lot of people are going to miss out on this one. This is quality music, headnodding music, and despite a potentially heavy theme it thankfully doesn’t come across as preachy music.

Like most things Monch does though “W.A.R.” will be pigeonholed as “elitist” and shoved in a box marked “not for the mainstream,” delivered to the dead letter office with no return address. His bitterness about that fate may be the only black mark against this album – there’s a tinge of resignation here and little effort to make himself more palatable to the masses. If you don’t mind that he doesn’t give a fuck and you don’t give a fuck either, this “W.A.R.” is for you.